Rewind the clock back to the morning after the collapse of Lehman Brothers; the Oilholic remembers it vividly. The world's fourth-largest investment bank at the time ran out of options, ideas, saviours and most importantly - working capital - on that fateful morning in September 2008. However, when filing for bankruptcy, it committed one final blunder. The administrators and liquidators - spread as far and as wide as the investment bank's own global operations - failed to coordinate with each other.

Uninstructed, the London administrator froze the bank's assets and panic ensued as investors started pulling out money from all investment banks; even those few with no question marks surrounding them. It was the moment the US sub-prime crisis became a global financial malaise that nearly took the entire system down.

Since the episode, several books have been written about the when, where, why and how; even what lead to the crisis and the inequity of it all has been dealt with. However, via his book Baroque Tomorrow, Jack Michalowski has conducted a rather novel examination – not just of the crisis alone, but also of our economic health either side of it, the proliferation of international finance and consumer driven innovations.

His claim about our present reality is a bold and controversial one – that virtually every element of the story of the past four decades points to a structural decline, one that's rooted, as in all other historical declines, in massively growing populations faced with declining innovation and lack of new energy converters or new cheap energy sources.

Drawing interesting parallels with what happened in Renaissance and Baroque Europe, Michalowski opines that the so-called Third Wave visions of mass affluence and broad technological progress hailed by Alvin Toffler and other futurists were just a fantasy.

In his book of just under 360 pages, split into four parts, Michalowski writes that in a world where political programmes last only until the next election; progress is flat or worse still non-existent. That all innovations are driven by returns on the money invested, and the major life-changing ones that propelled us onwards and upwards from the Industrial Revolution are already with us. What has followed in their wake are fads delivered to a consumer-led debt-laden world with rising levels of energy consumption.

According to Michalowski, history proves that we were only rescued from decline and propelled along a new path by the invention of new energy sources and new energy converters – things like agriculture, sailships, windmills, iron ploughs, combustion engines, trains, cars and airplanes, or nuclear reactors – and never by invention of new information processing technologies. IT advances, he argues, usually come late in the historical cycle.

On reading this book, many would remark that the author is over-simplifying the complex issues of innovation, progress and prosperity (or the lack of). Others would say he is bang on. That's the beauty of this work – it makes you think. For this blogger – it was a case of 50:50. There are parts of the book the Oilholic profoundly disagrees with, yet there are passages after passages, especially the ones on proliferation of international finance centres, debt, hydrocarbon usage and pricing, that one cannot but nod in agreement with.

Perhaps we are wiser in wake of the financial crisis and have turned a corner. That may well be so. But here's a tester – drive away from the glitzy Las Vegas Strip to other parts of the city where you’ll still see streets with plenty of foreclosed homes. Or perhaps, you care to visit the suburbs of Spanish cities littered with incomplete apartment blocks where developers have run out of money and demand is near-dead. Or simply check the inflation stats where you are? And so on.

In which case, is Michalowski wrong in assuming that there is a "de-education and de-skilling of the rapidly pauperizing middle class and dramatic polarization of the society between rich and poor. Very high levels of inequality are proven by history to be absolutely destructive. As malaise sets in, they become a major contributor to decline."

Some of the author's thoughts are hard to take; some of the dark quips – especially one describing Dubai as a Disneyland for grown-ups – make one smirk. None of his arguments are plain vanilla, but they make you turn page after page either in agreement or disagreement. You'll keep going because the book itself is very engaging; even more so in a climate of persistent inflation and stagnant real incomes.

Michalowski says that unless current trends change dramatically, the next forty years will bring more of the same. If so, we are looking at an entire century of decline in incomes and living standards or a "true Baroque era." Now, whether one buys that or not, the way the author has used history to make a statement on the macroeconomics of our time is simply splendid and a must read.

The Oilholic is happy to recommend it to peers in the world of energy analysis, economists and social sciences students. Even the enthusiasts of digital media might find it well worth their while to pick this book off the bookshelves or download it on their latest gizmo.

Greening up the USA’s oil capital 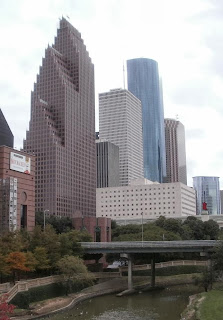 The Oilholic finds himself in Houston, Texas once again, feeling the pulse of the oil & gas market and catching-up with contacts old and new. But on this latest visit, yours truly has also picked up a new whiff of green! It seems the US oil capital's efforts to lower its carbon emissions and flag up its green credentials are bearing fruit in more ways than one.

Some of the ongoing efforts are not immediately apparent to outsiders. For instance, energy efficiency codes for the city's many skyscrapers have been completely redrawn and revised upwards as the Oilholic realised after stepping inside a few and have it confirmed by contacts.

More importantly, despite the new codes being non-mandatory for commerical establishments, most – including some of the largest oil companies in the world with offices here – have adopted them up and down Main Street and beyond with much gusto.

Here is something even more surprising, and one had to double-check with the City's Directorate of Sustainability and a contact at the EIA – the Houston Metropolitan Area is indeed the USA's largest municipal purchaser of renewable energy. Furthermore, over a third of it is sourced locally from Texan wind farms whose state-wide number alone exceeds many European countries taken as a whole.

Moving on to efforts that are clearly apparent, the Oilholic noted a few this afternoon having criss-crossed Downtown Houston on foot going left on Dallas Street from Main Street, turning on to Bagby Street and then right back up on Prairie Street in the other direction. For starters, a bike sharing programme has been underway since May 2012. While still in its infancy, Houston's answer to London's Boris bikes is commendable.

Under so-called the Houston B Cycle initiative, riders can provide their details online, purchase and get on-ground bike shares in Downtown, Midtown and the Museum District. Even some of the docking stations are solar powered (see photo right). Away from the programme, the City of Houston offers over 300 miles interconnected bikeway network spanning across 500 square miles and most public transport vehicles are 'bike storage' friendly.

Moving on from two wheels to four, more than half of the 10 or so official city vehicles spotted by this blogger were – hear this – either electric or hybrid. Courtesy a partnership between the Downtown District, BG Group and Houston First Corporation, you can also see GreenLink buses zipping by (see below left). Around seven of these circle the Downtown area, running on CNG and you can ride on them for free!

Houston Metro's light rail line, started in 2004, is fast expanding and adding three new lines. A farmers' market comes into town every week to sell locally sourced produce. And finally, a chance encounter with a Centerpoint Energy engineer at a downtown bar, led to another discovery that 75% of the traffic lights in Houston use LED bulbs! 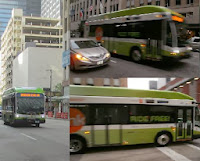 The city's criss-crossing freeways, erratically scattered green spaces and rush hour traffic often disguise the effort it has made to go green over the last 10 years.

The fact that it is the USA's fourth largest city and its fifth largest metropolitan area (atop being Texas' largest) with some 6 million-plus inhabitants, makes the progress made even more noteworthy. In 1999, Houston was the city with the dirtiest air quality in the country; today it is outside the worst ten, according to the American Lung Association.

One mute point though, which makes a lot of this blog's Texan friends chuckle – it seems eight of the worst ten cities in terms air quality are from 'green' California. One apiece from Indiana and Pennsylvania make-up the rest! What the Oilholic has catalogued above has been achieved in a short space of a decade. So here's to the next ten say locals. That's all for the moment from Houston folks! More soon, keep reading, keep it 'crude'!