Recapping the last fortnight, I noted some pretty interesting market chatter in the run-up to the end of the year. Crude talk cannot be complete without a discussion on the economic recovery and market conjecture is that it remains on track.

In the GEO, Fitch has marginally revised up its projections for world growth to 3.4% for 2010 (from 3.2%), 3.0% for 2011 (from 2.9%), and 3.3% for 2012 (from 3.0%) compared to the October edition of the GEO. Emerging markets continue to outperform expectations and Fitch has raised its 2010 forecasts for China, Brazil, and India due to still buoyant economic growth. However, the agency has revised down its Russian forecast as the pace of recovery proved weak, partly as a result of the severe drought and heatwave in the summer.

Fitch forecasts growth of 8.4% for these four countries (the BRICs) in 2010, and 7.4% for each of 2011 and 2012. While there are ancillary factors, there is ample evidence that crude prices are responding to positive chatter. Before uncorking something alcoholic to usher in the New Year, the oilholic noted that either side of the pond, the forward month crude futures contract capped US$90 per barrel for the first time in two years. Even the OPEC basket was US$90-plus.

Most analysts expect Brent to end 2012 at around US$105-110 a barrel and some are predicting higher prices. The city clearly feels a US$15-20 appreciation from end-2010 prices is not unrealistic.

Moving away from prices, in a report published on December 15th, Moody's changed its Oilfield Services Outlook to positive from stable reflecting higher earnings expectations for most oilfield services and land drilling companies in 2011.

However, the report also notes that the oilfield services sector remains exposed to significant declines in oil and natural gas prices, as well as heightened US regulatory scrutiny of hydraulic fracturing and onshore drilling activity, which could push costs higher and limit the pace and scale of E&P capital investment.

Peter Speer, the agency’s Senior Credit Officer, makes a noteworthy comment. He opines that although natural gas drilling is likely to decline moderately in 2011, many E&Ps will probably keep drilling despite the weak economics to retain their leases or avoid steep production declines. Any declines in gas-directed drilling are likely to be offset by oil drilling, leading to a higher US rig count in 2011.

However, Speer notes that offshore drillers and related logistics service providers pose a notable exception to these positive trends. "We expect many of these companies to experience further earnings declines in 2011, as the U.S. develops new regulatory requirements and permitting processes following the Macondo accident in April 2010, and as activity slowly increases in this large offshore market," he concludes.

Couldn’t possibly have ended the last post for the year without mentioning Macondo; BP’s asset sale by total valuation in the aftermath of the incident has risen to US$20 billion plus and rising. Sadly, Macondo will be the defining image of crude year 2010.

No OPEC Production Change & No Surprise

As expected, no major surprises came out of OPEC's 158th Meeting in the Ecuadorian capital Quito where the cartel left its production quotas unchanged this weekend. Some four of the twelve oil ministers from member nations – namely those of Kuwait, Qatar, Nigeria and Iraq – did not even turn up and sent junior officials instead.

It was interesting listening to an APTV recording of a press conference prior to the commencement of the OPEC meeting wherein none other than the Saudi Arabian Oil Minister Ali al-Naimi told a media scrum, “You guys really worry too much about prices. They go up, they go down. What’s new?”

We ask only because there is the little matter of the price of black gold capping US$90 per barrel either side of the pond for the first time in two years. He predicted a few seconds later that there would be no increase in OPEC production and here we are a few days hence. Interestingly, on the same day as Naimi was chiding reporters in Quito, the Paris-based International Energy Agency (IEA) opined that OPEC may come under pressure over 2011 to raise production.

IEA currently expects oil demand in 2011 to rise by 1.3 million bpd; 260,000 bpd more than previously forecast. In an accompanying statement, it said, "Although economic concerns remain skewed to the downside, not least if current high prices begin to act as a drag on growth, more immediately demand could surprise to the upside."

Overall, Global oil supply reached 88.1 million barrels a day last month, hitherto its highest ever level. Furthermore, the IEA forecasts world demand to expand 1.5 per cent in 2011 to 88.8 million barrels a day, which if recorded would also be a record. Its medium term projections for world oil demand for 2009-2015 is an average rise of 1.4 million bpd each year; an increment from its June assessment.

“You can’t be serious,” was often the trademark thunder of American tennis legend John McEnroe when an umpiring decision went against him. In a different context some commodities analysts might be thundering exactly the same or maybe not. In any case, deep down Mr. McEnroe knew the umpire was being serious.

On a not so sunny Tuesday afternoon in London, ICE Futures Europe recorded Brent crude oil spot price per barrel at US$91.32. This morning the forward month Brent futures contract was trading around US$90.80 to US$91.00. While perhaps this does not beggar belief, it certainly is a bit strange shall we say. I mean just days ago there was the Irish overhang and rebalancing in China and all the rest of it – yet here we are. Société Générale’s Global Heal of Oil research Mike Wittner believes the fundamental goalposts may have shifted a bit.

In a recent note to clients, he opines that underpinned by QE2, the expected environment of low interest rates and high liquidity next year should encourage investors to move into risky assets, including oil. “With downward pressure on the US dollar and upward pressure on inflation expectations, the impact should therefore be bullish for crude oil prices,” he adds.

What about the price? Wittner says (note the last bit), “For 2011, we forecast front-month ICE Brent crude oil near US$93/bbl, revised up by $8 from $85 previously. With continued low refinery utilisation rates, margins are still expected to be mediocre next year, broadly similar to this year. The oil complex in 2011 should again be mainly led by crude, not products.”

YooHoo – see that – “mainly led by crude, not products.” Furthermore, SGCIB believes crude price should average US$95 in H2 2011, in a $90-100 range. Well there you have it and it is a solid argument that low interest rates and high liquidity environment is bullish for oil.

Elsewhere, a report published this morning on Asian refining by ratings agency Moody’s backs up the findings of my report on refinery infrastructure for Infrastructure Journal. While refinery assets are rather unloved elsewhere owing to poor margins, both the ratings agency and the Oilholic believe Asia is a different story[1].

Renee Lam, Moody's Vice President and Senior Analyst, notes: “Continued demand growth in China and India in the short to medium term will be positive for players in the region serving the intra-Asia markets. Given the stabilization of refining margins over the next 12 to 18 months, a further significant deterioration of credit metrics for the sector is not expected.”

While Moody's does not foresee a significant restoration of companies' balance-sheet strength in the near term, they are still performing (and investing in infrastructure) better than their western, especially US counterparts.

[1] Oil Refinery Infra Outlook 2011: An Unloved Energy Asset By Gaurav Sharma, Infrastructure Journal, Nov 10, 2010 (Blog regarding some of the basic findings and my discussion on CNBC Europe about it available here.)

Some Crude Chatter from Moody’s & Other Stuff

There’s been some interesting chatter from Moody’s these past seven days on all things crude. Some of these stood out for me. Early last week in a note to clients, the rating agency opined that CNOOC Ltd's Aa3 issuer and senior unsecured ratings would not be immediately affected by the Chinese company's additional equity investment of US$2.47 billion in its 50% joint-venture Bridas Corp.

The investment represents CNOOC's share of funding contributions for Bridas to purchase a remaining 60% interest in Pan American Energy, which is engaged in E&P ops in South America. Bridas plans to fund 70% of its purchase by equity and 30% by debt or additional contributions from shareholders.

CNOOC is funding its equity contribution to Bridas with internal resources on hand. The transaction would give it an additional 429 million BOE of proved reserves and 68,000 bpd daily production in South America, according to Moody’s. Completion of the transaction is expected to take place during H1 2011, that’s of course government and regulatory approvals pending.

However, the crude chatter of the week not just from Moody's, but from the entire market was the agency’s interesting analytical take on oil sands producers’ operating considerations. In a report titled – Analytical Considerations for Oil Sands Producers – the agency notes that while comparing oil sands development and production projects to conventional development and production projects, the former have much larger upfront development costs[1].

One might say that parts of the report are predictable but it must be noted that in analysing companies with relatively large oil sands exposure, Moody's balances the negative aspects of the difficult construction period against the anticipated long-term positive contributions from these assets. So well, on balance, I found the principal tenets to be very convincing.

Let us face it, whether peak oil will be here soon or not, “easy oil” (interchangeable with cheap oil) is most certainly gone. Cost overruns are unlikely to deter big oil. So far Shell has invested just under US$10 billion (River Oil Sands), Chevron US$9 billion (Athabasca), ExxonMobil US$5 billion (Kearl Oil sands investment) and BP is said to be catching up via its Sunrise oil sands investment. 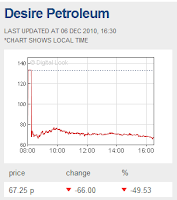 Elsewhere, Desire Petroleum’s saga of will they find oil in the Falklands Is. or won't they or worse still when will they give up continues. Its share price saw wild swings and ended in a damp squib (haven’t we heard that before).

On the left, for the umpteenth time, here is Desire’s undesirable share chart (see the day's price nose-dive). To quote The Daily Mail’s inimitable Geoff Foster, “Many professional punters are gluttons for punishment. They continually get suckered into seat-of-your pants oil stocks and more often than not, live to regret it.”

I do not wish to tempt fate, but Desire Petroleum is no Cairn Energy. I do hope for Desire's sake that they do strike black gold in meaningful if not bountiful quantities. However, the market response to a whiff of positive news is nothing short of barmy.

[1] The report is available on Moody's web site.