It has been an interesting five days over which, most notably, analysts at Goldman Sachs opined on Monday that the Chinese government will in all likelihood employ more tightening measures on the economy but their impact on the burgeoning economy’s oil demand for is likely to be “limited.”

The Goldman guys believe a far greater near term risk will come from the “current exceptional strength in diesel demand, which could push Chinese oil demand to new highs in November and December.” Fair dues I say, but not the best of expressions when talking about Ireland.

As further details about its imminent bailout are awaited not many in the City were keen to commit further funds towards crude futures. However, some city types I know were fairly cool about both the fate of the Irish and the connection of the country's troubles with an equities overhang on either side of the pond.

From Goldman analysts, the Irish and the Chinese to the ITPOES who were at it again last week. ITPOES are of course, the (UK) Industry Taskforce on Peak Oil and Energy Security, who warned the British government again last week that a new "peak oil threat" is likely to be felt in the UK within the next five years.

The ITPOES came into being in 2008 led by none other than the inimitable Sir Richard Branson. Their latest report, which is part rhetoric, part fact, is titled Peak Oil Implications of the Gulf of Mexico Oil Spill and was released on Friday (Available here).

Deepwater drilling, they say, is expected to constitute 29 per cent of new global extraction capacity by 2015, up from only 5 per cent. The result is that any future delays or problems associated with deepwater drilling in wake of the BP Gulf of Mexico accident will have much greater impact on supply than is the case today. Wonder whether that implies the end of "cheap oil" rather than the nearing of "peak oil." 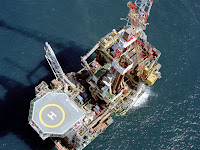 The price of crude has seen a fair bit of fluctuation week over week and I agree with analysts at Société Générale CIB who noted on Tuesday that "the modest short-term crude price correction has been driven by investor profit-taking, as well as an end to a surge in gasoil cracks, which had temporarily supported crude prices."

Prices actually peaked on Wednesday and Thursday of last week. Since then, the front-month crude prices have eased by US$2-3. At 18:05GMT on Tuesday, WTI forward month contract was trading at US$80.65/bbl and ICE Brent at US$83.60/bbl.

Elsewhere in this crude world, it was revealed on Tuesday that BP’s Rhim field off the coast of Scotland has been shutdown as it is understood that the field turned out to be a joint venture between it and financiers related to Iranian oil. The shutdown was triggered because extraction from the field could be in contravention of existing European Union sanctions against Iran, issued in October.
The company it is now seeking clarification from the UK government on how the sanctions would apply. Elsewhere, S&P Ratings Services affirmed its 'BBB-' long-term corporate credit rating and 'ruAA+' Russia national scale rating for Lukoil last week.

Concurrently, S&P also removed the ratings from CreditWatch, where they were placed on July 29, 2010. S&P credit analyst Andrey Nikolaev said, "The affirmation reflects our improved assessment of Lukoil's liquidity position, which we now assess as 'adequate' after the company successfully issued a $1 billion Eurobond."

S&P views Lukoil's business risk profile as "satisfactory", underpinned by large and profitable upstream and downstream operations, which are largely concentrated in Russia. The ratings agency also views Lukoil's financial risk profile as 'intermediate', based on its modest debt leverage and our perception that it has fairly good access to bank funding and capital markets. 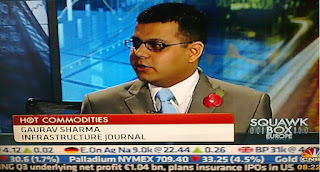 This week marked the culmination of almost a month and a half of my research work for Infrastructure Journal on the subject of oil refinery infrastructure and how it is fairing. Putting things into context, like many others in the media I too share an obsession with the price of crude oil and upstream investment. I wanted to redress the balance and analyse investment in the one crucial piece of infrastructure that makes (or cracks) crude into gasoline, i.e. refineries. After all, the consumer gets his/her gasoline at the gas station – not the oil well. The depth of Infrastructure Journal's industry data (wherein a project’s details from inception to financial close are meticulously recorded) and the resources the publication made available to me made this study possible. It was published on Wednesday, following which I went over to discuss my findings with the team of CNBC’s Squawk Box Europe.

I told CNBC (click to watch) that my findings suggest activity in private or public sector finance for oil refinery projects, hitherto a very cyclical and capital-intensive industry currently facing poor margins, is likely to remain muted, a scenario which is not going to materially alter before 2012.

The evidence is clear, integrated oil companies have and will continue to divest in downstream assets particularly refineries because upstream investment culture of high risk, high rewards trumps it.

Growth in finance activity is likely to come from Asia in general and surprise, surprise India and China in particular. It is not that margins are any better in these two countries but given their respective consumers’ need for gasoline and diesel – margins become a lesser concern.

However, in the west, while refiners’ margins remain tight, new and large refinery infrastructure projects would see postponements, if not cancellations. In order to mitigate overcapacity, a number of mainly North American and European refiners or integrated companies will shutdown existing facilities, albeit quite a few of the shutdowns will be temporary.

Geoff Cutmore and Maithreyi Seetharaman probed me over what had materially changed, after all margins have always been tight? Tight yes, but my conjecture is that over the last five years they have taken a plastering. On a 2010 pricing basis, BP Statistical Review of World Energy notes that the 2009 refining average of US$4.00 per barrel fell below the 2008 figure of $6.50 per barrel; a fall of 38.5%. In fact, moving away from the average, on an annualised basis, margins fell in all regions except the US Midwest last year while margins in Singapore were barely positive.

Negative demand has in effect exasperated overcapacity both in Europe and North America. BP notes that global crude runs fell by 1.5 million bpd in 2009 with the only growth coming from India and China where several new refining capacities, either private or publicly financed, were commissioned. Its research further reveals that most of the 2 million bpd increase in global refining capacity in 2009 was also in China and India. Furthermore, global refinery utilisation fell to 81.1% last year; the lowest level since 1994.

In fact does it surprise anyone that non-OECD refinery capacity exceeded that of the OECD for the first time in 2009? It doesn’t surprise me one jot. I see this trend continuing in 2010 and what happens thereafter would depend on how many OECD existing refineries facing temporary shutdown are brought back onstream and/or if an uptick in demand is duly noted by the OECD nations. A hope for positive vibes on both fronts in the short to medium term is well...wishful thinking.

Refineries were once trophy assets for integrated oil companies but in the energy business people tend to have short memories. Alas, as I wrote for Infrastructure Journal (my current employers) and told CNBC Europe (my former employers), now they are the unloved assets of the energy business.