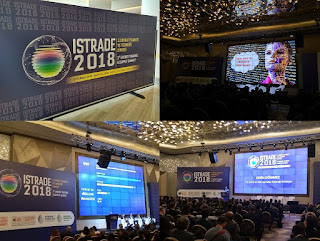 Barely had the Oilholic returned from Panama, that it was time to head 1550 miles east to Istanbul, Turkey for ISTrade 2018: The 3rd Energy Trading and Supply Conference on the banks of the Bosphorus.

Yours truly was invited to speak and moderate a panel on the digitisation of energy trading here with a heavy emphasis on - you guessed it blockchain; an emerging and perennially hot topic at energy trading events which are rapidly beginning to feel like technology events!

More on that later, but first on to 'crude' thoughts, and it seems feedback from the great and good of energy trading in Turkey, on this splash and dash work visit to the country, reconfirms one's thoughts that oil is likely to stay in relatively predictable price bracket of $60-70 per barrel, even if geopolitical risk briefly props it up to $70 per barrel.

Away from the crude price, ISTrade 2018 delegates also noted how trading arms of 'Big Oil' companies, and established commodities trading houses like Vitol, Gunvor and Glencore and the likes, are investing in blockchain and are being exceptionally candid about it.

It set the scene nicely to discuss energy trading in relation to emerging technology, and the Oilholic's take was that it's a one way street to process efficiencies and optimisation. The market can expect more of the same. To discuss the subject, this blogger was joined on the panel by Ashutosh Shashtri, Director of EnerStrat Consulting and Serkan Sahin, Manager, Europe and Africa Oil and Gas Research at Thomson Reuters.

Elsewhere, at IStrade 2018, a plethora of crucial topics were discussed. Here is the Oilholic's detailed report for Forbes from the event. One final point, before taking your leave, is to flag up a Rystad Energy research note that arrived over the weekend. The independent energy research and consulting firm reckons US oilfield services have more to lose compared to Chinese peers from current trade tensions between both countries initially fanned by President Donald Trump. 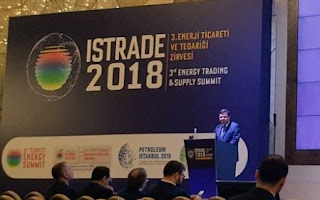 On April 3, the US published a list of approximately 1,300 Chinese exports that could see tariffs in the near future. Not to be outdone, the Chinese government promised and delivered additional retaliation.

American companies Clariant, Ecolab, Hexion and NOV each have had significant revenues from China in the past few years. NOV brought in revenues upwards of $561 million during 2017 from their fibreglass and composite tubular businesses in China.

"The giant service company NOV was anticipated to have over $650 million in annual revenues from China for the remainder of the Trump presidency. A trade war between the two nations could certainly impact their ability to grow in this market," Fitzsimmons adds.

Hexion, a chemistry company offering oilfield drilling chemicals, had $309 million in revenue from China during 2017. Rystad Energy estimates Hexion's Chinese business could grow to $350 million in 2019, if it were not impacted by trade tariffs. Continued Chinese and American trade tensions could have an adverse effect on these companies.

While less volume is at stake, the trade tensions also give reason for concern to Chinese service companies. Hilong and Drill Pipe Master are two pipe fabricators that were impacted by initial US tariffs. However, these companies have strong domestic customers and diverse international clients that will soften adverse effects from trade tensions.

Well there you have it, although many here in Istanbul are hoping things would calm down between the Trump White House and China, with cooler heads prevailing eventually. That's all from Istanbul folks! Keep reading, keep it 'crude'!

The Oilholic finds himself on this glorious sunny day roughly 5,300 miles away from his abode of London town, admiring a marvel of modern engineering – the Panama Canal. In fact, yours truly got to do so both from the shore and on the water aboard the Pacific Queen.

Being a creature of habit, a Forbes piece will follow later down this month. However, this outing is no 'crude' assignment, rather a bid by this blogger to fulfill a long held desire to see the Canal. This maritime shortcut – in operation since 15 August, 1914 built after a decade of construction – serves to connect the Atlantic and Pacific Oceans at the narrowest point of the Isthmus of Panama and the American continent.

The journey, north to south or vice versa, takes around 8 to 10 hours over a distance of around 80km (50 miles) depending on traffic, saving shippers of bulk cargo and commodities, including oil and gas, almost 15 days of circling around Cape Horn.

And for those privileged enough to have travelled on the Canal, as the Oilholic did today, would notice its locks – including the iconic Miraflores and Pedro Miguel locks – serve as water lifts to raise or lower ships from the Pacific or Atlantic Oceans, depending on their North or Southbound routes, either side of the Isthmus of Panama, to the artificial Gatun Lake 27 meters above sea level; the Canal's connecting water body for transit.

The Panama government pumped in $5.3bn towards the Canal's expansion in 2007 following public consultation, and the expanded Canal – inaugurated on 26 June 2016 – saw its capacity double. So atop Panamax vessels, it can now handle Neo-Panamax vessels (or Aframax class).

These days toll fees charged for the largest vessels per crossing could be in the range of $500,000 to $800,000. The Panama Canal Authority, a public body entrusted with running the Canal since Panama took over the administration of the waterway from the US in 1999, argues that a trip around Cape Horn would cost way more both in monetary terms and time of passage.

Not content with visiting the Miraflores center, The Oilholic also lapped up views of the waterway from Cerro Ancon - Panama City's highest point.

But of course, the main show came on board the Pacific Queen, when one got a feel of the Panama Canal going southbound from the Atlantic to the Pacific crossing Gatun, Pedro Miguel and Miraflores locks, being first raised to Gatun lake, and then lowered on the journey to the Pacific, heading under the Centennal Bridge and the Bridge of the Americas before ending a memorable voyage.

All in all, an amazing outing and to have been here and seen it. And with that done, it's time to head back. Photos from the outing - with captions - are spread across this post (and below), along with a video of a tanker crossing the Miraflores locks (above). But alas, that's all from Panama City folks! Keep reading, keep it 'crude'!

ADDENDUM: April 16, 2018: As promised here is The Oilholic’s report on ‘crude’ traffic on the Panama Canal for Forbes.

The Oilholic's glimpses of the Panama Canal: