This week, that crude year!

With the oil price barely moving from its current $50 per barrel circa, it’s worth looking back at how the market panned out in 2016.

In fact this week, that year we grappling with sub $30 prices and threatening to go lower. That's when OPEC initiated chatter of a production cut around February, before eventually executing it much later in the year on November 30, and bringing 11 other non-OPEC producers, especially the Russians, along for the ride. (Click to enlarge chart)

The uptick in the wake of the ‘historic’ agreement saw crude prices bounce to where they currently are and no further. So taking the 12 months of 2016 as whole, Brent began the year at around $37.28, flirted briefly with sub-$30 prices and ended the year at $56.82; a gain of 52.4% between the first and last full trading Fridays of 2016.

Concurrently, the West Texas Intermediate rose from $37.04 to $53.72; a gain of 45% between the first and last full trading Fridays of 2016. The Oilholic acknowledges that percentages are relative, but would be astonished if 2017 ends in similar gains. That’s all for the moment folks! Keep reading, keep it ‘crude’! 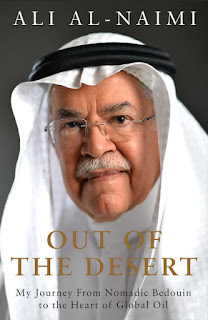 For over two decades, every word Ali Al-Naimi uttered was lapped up by the oil market. It wouldn’t be otherwise, if you were the oil minister, as he once was, of OPEC heavyweight Saudi Arabia between August 1995 and May 2016.

So when Al-Naimi’s memoir – Out of the Desert: My Journey from Nomadic Bedouin to the Heart of Global Oil – appeared on the horizon barely a few months into his retirement, global headlines were all but guaranteed, especially at a time of extreme volatility and a once in a generation market dynamic shift in the global crude world.

Yet, before the world got to know Al-Naimi as the oil market heavyweight, there was the nomadic shepherd boy born of humble beginnings in Eastern Arabia who dreamt of making it big.

In a memoir of over 300 pages, split by 19 chapters, Al-Naimi recounts his extraordinary journey, from an office boy in 1947 at oil company Aramco, to the CEO’s chair in 1988 of the then state-owned Saudi Aramco.

Al-Naimi’s recollections send the reader alternating from human interest sentiment to hard core global geopolitics, inner workings of the oil industry to the deals in the corridors of power, corporate decisions to political manipulation. There’s a bit of everything, and more of what you would come to expect of a global political figure. Afterall, power, politics and that precious natural resource called oil go hand in glove.

Having interacted in a journalistic capacity with Al-Naimi at several OPEC meets prior to his retirement, I often heard the industry veteran quip that in his career he had seen the oil price drop to as low as $2 and climb as high as $140 a per barrel. This book will help you get some perspective.

Even before it hit the shelves, media outlets as diverse Forbes, Bloomberg and the International Business Times, were writing news stories based on excerpts from it in a bid to take Al-Naimi’s thoughts and help them decode, how for instance talks between OPEC and non-OPEC oil producers would pan out.

From OPEC’s traditional mistrust of Russia, to everyone in the oil business looking at the Saudis to cut, Arab oil embargo to the collapse of Lehman Brothers, Al-Naimi has catalogued implications of such events for the oil market. For instance, Al-Naimi claims that in a situation akin to the crisis of demand seen in 2008-09, when the 2014 supply glut crisis hit, everyone expected the Saudis to act but offered no help with sharing the burden.

An already brilliant narrative is enhanced by a peppering of market anecdotes previous unheard of which the Oilholic enjoyed reading. The book’s appeal is universal. That said students of history, oil industry observers, industry analysts and geopolitics enthusiasts ought to regard it as a must read.