Cairn Energy’s oilfields in the Indian state of Rajasthan continue to excite. In a trading statement last week, the company raised its estimate of reserves from 175,000 barrels of oil per day to a potential 240,000 barrels of oil. Cairn’s stock rose nearly 11.5% intraday as the markets greeted the news with much gusto as did the Indian media given the oily needs of the country’s burgeoning economy.

Cairn also hopes the opening of a new 590 km pipeline over the second quarter of 2010, which will connect the Mangala oilfield to Salaya port (in Gujarat state), would further fire-up production. Currently, oil from Mangala is transported by road haulage tankers.

In other trading data, Cairn posted an operating profit of $53 million in 2009, up from $11 million in 2008. Its Chief Executive Sir Bill Gammell also sounded optimistic about the company's prospects in Greenland. Cairn is to prospect for oil at four drilling sites in Baffin Bay and estimates these areas could contain over 4.0 billion barrels of oil.

Sir Bill says, "It’ll take stamina, skill and indeed luck to find hydrocarbons in the area." That was probably his philosophy when he bought his company’s Indian assets from Royal Dutch Shell; and it sure has yielded dividends.

In contrasting fortunes, it seems drilling for the crude stuff off the Falkland Islands coast may not be economically feasible after all the argy-bargy between UK and Argentina. The prospect of oil in the region renewed diplomatic spats with the Argentine Government complaining to the UN and launching fresh claims of sovereignty on the Falkland Islands, over which in went to war with the British and lost.

UK promptly rejected the recent claims on basis of the right of self-government of the people of the Islands "underpinned by the principle of self-determination as set out in the UN charter". The people are happy to be British subjects and have been for over a century. All the caterwauling now sounds foolish and premature.

In a corporate announcement in London on Monday, Desire Petroleum – one of the British companies prospecting for oil in the area – said initial results from its Liz 14/19-1 well, in the North Falkland basin prospection zone, showed quantities of oil may be small and of poor quality.

Shares in Desire, recently named among Deloitte’s upstream upstarts, ended Monday trading in London down nearly 50%. Rockhopper Exploration, another company drilling in the region with a 7.5% interest in the Liz well, saw its shares tumble 25.5%. Other regional players also took a hit across the board. Desire Petroleum will need to drill further and deeper than anticipated if it has the will to find better quantities of oil and gas. "It will not be possible to determine the significance of the hydrocarbons encountered and whether the well will need to be drilled deeper, suspended for testing or plugged and abandoned," the company said.
© Gaurav Sharma 2010. Photo Courtesy © Cairn Energy Plc
Posted by Gaurav Sharma at 3/29/2010 09:18:00 pm No comments:

In line with market expectations, oil cartel OPEC held its current daily production output quota at 24.845 million barrels following the conclusion of its meeting in Vienna.

In a statement the cartel noted that production increases among oil exporting countries that were not part of OPEC would offset rising global demand for oil. Clarifying its stand, OPEC said that although world oil demand is projected to increase marginally during the year, this rise will be more than offset by the expected increase in non-OPEC supply, meaning that 2010 is likely to witness a decline in the demand for OPEC crude oil for the third consecutive year.

The cartel added that the persistently high OECD stock levels (estimated to currently stand at 59-61 days of forward cover i.e. well above their five-year average) indicate that there has been a contra-seasonal stock build in the first quarter 2010 and the overhang in terms of forward cover is expected to continue throughout the year.

Furthermore, market commentators also believe that OPEC member nations already flout their set quota cap. Overall compliance of quotas is thought to be in the circa of 52% to 58% depending on whom you speak to in the City.

OPEC president, Germanico Pinto, said that while an improvement was seen in the oil market outlook in recent months, there was some way to go before the cartel could feel at ease with the situation. In case the markets get unstable, the cartel stands ready, “to swiftly respond to any developments which might place oil market stability in jeopardy.”

Despite the predictability of the announcement, markets responded with a customary spike largely fuelled by a weaker U.S. Dollar. NYMEX light sweet crude was up 77 cents at $82.47 a barrel, nearing the $82.50 barrier. Concurrently, in London Brent crude was up by 72 cents to $81.25 a barrel on ICE Europe. Next meeting of the cartel is set for Oct 14, 2010 in Vienna.

Oil major BP has swooped for assets in Brazil, Azerbaijan and U.S. deepwater Gulf of Mexico from Devon Energy for a price tag of $7 billion as well as giving the latter a 50% stake in its Kirby oil sands holdings in Alberta, Canada, for $500 million.

The 50/50 Canadian joint venture, slated to be operated by Devon, will pursue development of the interest. Devon Energy has also committed to fund an additional $150 million in capital costs on BP’s behalf.

Going into further details, BP said the acquired assets include ten exploration blocks in Brazil, seven of which are in the Campos basin, prospects in the U.S. Gulf of Mexico and an interest in the BP-operated Azeri-Chirag-Gunashli (ACG) development in the Caspian Sea, Azerbaijan.

Apart from diversifying in general, the move was as much about strengthening the British oil major’s foothold in the Gulf of Mexico where it has been a key player for decades. BP will now gain a high quality portfolio in the Gulf with interests in some 240 leases, with a particular focus on the emerging Paleogene play in the ultra-deepwater.

The addition of Devon Energy’s 30% interest in the major Paleogene discovery Kaskida will give BP a 100% interest in the project. The assets also include interests in four producing oil fields: Zia, Magnolia, Merganser, and Nansen. Market commentators have already given the deal a thumbs-up.

Furthermore, Andy Inglis, BP's chief executive of Exploration and Production, told the media that BP’s entry into Brazil will add a major position in another attractive deepwater basin. "Together with the additional new access in the Gulf of Mexico, it further underlines our global position as the leading deepwater international oil company," he added.

BP also hopes to count on Devon Energy's first-hand experience in Canada. "Devon is an experienced operator in the Canadian oil sands with a proven track record of in situ development and production. We expect this transaction will accelerate the development of the Kirby assets and, through the associated crude off-take agreement, provide a secure source of Canadian heavy oil for our advantaged Whiting refinery," Inglis noted.
© Gaurav Sharma 2010. Logo Courtesy © BP Plc
Posted by Gaurav Sharma at 3/17/2010 04:56:00 pm No comments: 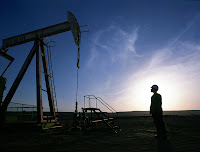 As the crude oil price lurks around its 52-week high of $83.25 a barrel, one cannot but help thinking about what CEO of Royal Dutch Shell Peter Voser said earlier this month. Speaking at the Wall Street Journal’s ECO:nomics conference in California on March 4, Voser told delegates, "I think what is dead is cheap oil. There is sufficient oil around but producers will have to spend more to get it. And I think you'll see that in the end price for consumers."

Debunking the “Peak Oil” hypothesis, Voser said that by 2050 around 40% of cars worldwide will be electric leaving some two-thirds still running on oil. “We will need conventional oil for the foreseeable future,” he added.

Oil futures gained over 2% last week, on the back of positive U.S. jobs data and healthy market feedback on Chinese and Indian economic growth. According to an investors note sent out to clients, analysts at Commerzbank AG believe the price of oil could exceed the current trading circa of $70 to $82 a barrel.

Classic problem for forecasters is that direction of the economy and currency fluctuation aside, ETFs have more or less converted investing in commodities into a pseudo asset class. Hence, retail investors could de facto bet on commodities consumption patterns of emerging economies by investing (or divesting) in commodities, especially oil, via ETFs.

It is a no-brainer that anyone who holds a paper barrel hopes to profit from it and few have any intention whatsoever of ever taking an actual delivery of oil. I feel it is prudent to mention that I am not joining the “Hate Speculators Club”. While supply and demand scenarios should (and in most cases do) dictate market movements, there’s more than one reason why cheap oil’s dead.

Talking of Moses & Geology in the Same Sentence?

Could a study of religion and geology come together and yield one of the most precious natural resources? Yes, say the founders of two rather unique firms prospecting for the crude stuff in Israel. They are Zion Oil – a Dallas, Texas-based, NASDAQ (Global market) listed company and Givot Olam Oil Ltd which is listed on the Tel Aviv Stock Exchange (TASE).
The founders of both firms believe visions in science and religious epiphanies can come together. In case of Givot Olam, (meaning “everlasting hills” in Hebrew), its founder Tovia Luskin has been prospecting for oil in Israel since 1994 with a degree of success. Corporate records suggest he found inspiration in Chapter 33 of the Book of Deuteronomy, in which Moses, after having guided the tribes of Israel to the Promised Land, leaves each tribe with a blessing.
Of these, Ephraim and Manasseh, two tribes thought to have descended from Joseph, were blessed by Moses with the “precious fruits of the deep lying beneath the ancient mountains and of the everlasting hills.” Givot Olam was founded on the premise that the words pointed to an oil trap in Palmyra rift region in Israel.
The area is thought to be in the biblical territories of Ephraim and Manasseh, or rather sandwiched in the patch between Tel Aviv and Haifa. In a land far, far away, known by some as the USA, a born again Catholic from Texas - John Brown had a similar vision to Luskin's, pointing to nearly the same crude prospection zone.
Both men and the companies they subsequently founded spent years raising capital and literally digging up geological evidence to back their respective religious epiphanies. Seismic studies confirm some of their conjecture and crude stuff has indeed been found; albeit not (yet) in meaningful quantities. It is not that Israel has no oil and gas wells – they do exist but are very few and far between.
Further prospection has been hampered by geopolitics as major oil corporations with exposure elsewhere in the Middle East, have not touched Israel perhaps for fear of antagonising their Arab partners. Zion Oil and Givot Olam have no such concerns. If both companies strike oil in meaningful quantities, the discoveries could make Israel partly self-reliant.
According to the country’s Ministry of National Infrastructures, Israel currently imports 90% of its oil from Russia and FSU nations. The country consumes about 80 million barrels of oil annually or 270,100 barrels per day according to latest industry estimates. Only time will tell if Moses’ blessing came in the form of black gold. Regardless of the ultimate results, the endeavours of team(s) Brown and Luskin cannot be faulted.
© Gaurav Sharma 2010. Photo Courtesy © Zion Oil, Dallas, USA
Posted by Gaurav Sharma at 3/05/2010 12:16:00 pm No comments: