Why Iran is miffed at (some in) OPEC?

The talking is over, the ministers have left the building and the OPEC quota ‘stays’ where it is. However, one OPEC member – Iran – left Vienna more miffed and more ponderous than ever. Why?

Well, if you subscribe to the school of thought that OPEC is a cartel, then it ought to come to the aid of a fellow member being clobbered from all directions by international sanctions over its nuclear ambitions. Sadly for Iran, OPEC no longer does, as the country has become a taboo subject in Vienna.

Even the Islamic Republic’s sympathisers such as Venezuela don’t offer overt vocal support in front of the world’s press. Compounding the Iranians’ sense of frustration about their crude exports being embargoed is a belief, not entirely without basis, that the Saudis have enthusiastically (or rather "gleefully" according to one delegate) stepped in to fill the void or perceived void in the global crude oil market.

Problems have been mounting for Iran and are quite obvious in some cases. For instance, India – a key importer – is currently demanding that Iran ship its crude oil itself. This is owing to the Indian government’s inability to secure insurance cover on tankers carrying Iranian crude. Since July, EU directives ban insurers in its 27 jurisdictions from providing cover for shipment of Iranian crude.

Under normal circumstances, Iranians could cede to the Indian demand. But these aren’t normal circumstances as the Iranian tanker fleet is being used as an oversized floating storage unit for the crude oil which has nowhere to go with the speed that it used to prior to the imposition of sanctions.

The Obama administration is due to decide this month on whether the USA will renew its 180-day sanction waiver for importers of Iranian oil. Most notable among these importers are China, India, Japan, South Korea, Taiwan and Turkey. US Senators Robert Menendez (Democrat) and Mark Kirk, have urged President Obama to insist that importers of Iranian crude reduce their purchase contracts by 18% or more to get the exemption.

So far, Japan has already secured an exemption while decisions on India, South Korea and China will be made before the end of the month. If the US wanted to see buyers cut their purchases progressively then there is clear evidence of this happening. Two sources of the Oilholic’s, in the shipping industry in Singapore and India, suggested last week that Iranian crude oil exports are down 20% on an annualised basis using November 23 as a cut off date. However, a December 6 Reuters' report by their Tokyo correspondent Osamu Tsukimori suggested that the annualised drop rate in Iranian crude exports was actually much higher at 25%.

Of the countries named above, Japan, South Korea and Taiwan have been the most aggressive in cutting Iranian imports. But the pleasant surprise (for some) is that India and China have responded too. Anecdotal evidence suggests that Chinese and Indian imports of Iranian crude were indeed dipping in line with US expectations.

When the Oilholic visited India earlier this year, the conjecture was that divorcing its oil industry from Iran’s would be tricky. Some of those yours truly met there then, now agree that Iranian imports are indeed down and what was stunting Iranian exports to India was not the American squeeze but rather the EU’s move on the marine insurance front.

If Iran was counting on wider support within OPEC, then the Islamic republic was kidding itself. That is because the Organisation is itself split. Apart from the Iraqis having their own agenda, the Saudis and Iranians never get along. This splits the 12 member block with most of Iran’s neighbours almost always siding with the Saudis. Iran’s most vocal supporter Venezuela, is currently grappling with what might (or might not) happen to President Hugo Chavez since he’s been diagnosed with cancer. 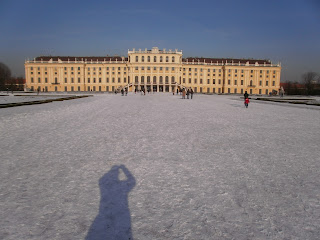 Others who support Iran keep a low profile for the fear of getting embroiled in diplomatic wrangling which does not concern them. So all Iran can do is moan about OPEC not taking ‘collective decisions’, hope that Chinese patronage continues even if in a diminished way and stir up disputes about things such as the appointment of the OPEC Secretary General.

The dependency of Asian importers on Iranian crude is not going to go overnight. However, they are learning to adapt in fits and starts as the last 6 months have demonstrated. This should worry Iran.

That’s all from Vienna folks! Since it’s time to say Auf Wiedersehen and check-in for the last British Airways flight out to London, the Oilholic leaves you with a view of his shadow on a sun soaked, snow-capped garden at Schönbrunn Palace. Christmas is fast approaching but even in the season of goodwill, OPEC won’t or for that matter can’t come to Iran’s aid while the US and EU embargo its exports. Even cartels, if you can currently call OPEC one, have limits. Keep reading, keep it ‘crude’!

OPEC is a conservative organization.It has a tradition and values its tradition ...very much.For most of its 53 years of existance the organization has ecountered internal conflicts and wars,outside inflictions and wars as well as oil exports embargo.All these years the organization has remained united and respectful towards each and every member.When it comes to the founding members the red lines become even more vivid.Iraq,Libya,Venezuela,Angola,Nigeria and Iran have undergone foreign oil sanction from time to time and one way or the other.Back in 1960's Venezuela was the largest oil producer,then Iran and then Saudi Arabia.Oil is a dynamic business and countries including OPEC members face with different situations but members realise and respect each other's situations.In fact I am writing this as an endorsement of the report of 12 December Conference in Vienna.