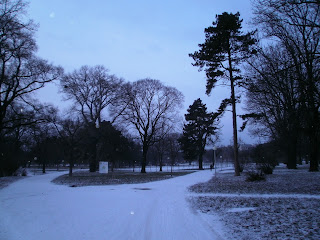 The Oilholic finds himself back in Vienna for the 162nd meeting of OPEC ministers and his first snowfall of the festive season; the latter has eluded him back home in London. Here is a view of Vienna's snow-laced Auer Welsbach Park and it’s not the only place where things are a bit chilly. The OPEC HQ here could be one place for instance!

For this time around, accompanying the usual tussles between the Saudis and Iranians, the doves and the hawks, is the additional stress of appointing a successor to OPEC Secretary General Abdalla Salem el-Badri, a genial Libyan, who is nearing the end of his second term.

Finding a compromise candidate is usually the order of the day but not if 'compromise' is not a by-word for many of its members. Trouble has been brewing since OPEC members last met in June. As a long term observer of the goings-on at OPEC, the Oilholic can say for certain that all the anecdotal evidence he has gathered seems to suggest a clash is imminent. That’s hardly a surprise and it could not have come at a worse time.

OPEC has forecast a 5% drop in demand for its crude oil in wake of shale supply and other unconventional oil from non-OPEC jurisdictions hitting the market in a troubling global macroeconomic climate. It also acknowledged for the first time that shale oil was of concern and then got into a debate with the IEA whether (or not) US production could overtake Saudi Arabia’s by 2020. In light of all this, OPEC could seriously do with some strong leadership at this juncture.

Sources suggest three 'potential' candidates are in the running to succeed el-Badri. Two of these are Thamir Ghadhban of Iraq and Gholam-Hossein Nozari of Iran. Both have served as their country’s respective oil ministers. The third man is Majid Munif; an industry veteran and a former Saudi OPEC adviser. Now, the Oilholic uses the world ‘potential’ above for the three men only guardedly.

Historical and recent acrimony between the Iranians and Saudis needs no documentation. It has only been a year and half since an OPEC meeting broke-up in acrimony and er...highly colourful language! This puts the chances of either one of them settling for the other’s candidate as highly unlikely. Iran is also miffed about the lack of support it has received in wake of international sanctions on its oil industry by several importing jurisdictions.

Some here suggest that Ghadhban of Iraq would be the compromise candidate for the post. However, sources within four MENA OPEC member delegations have told the Oilholic that they are backing the Saudi candidate Munif. Yours truly cannot predict whether they’ll have a change of heart but as things stand, a compromise banking on the appointment of an Iraqi is just not working out.

Never say ‘never’ but the possibility of el-Badri continuing is remote as well. He is not allowed more than two terms under OPEC rules. In order to assuage both the Iranian and the Saudis, perhaps an Ecuadorian or an Angolan candidate might come forward. While such a candidate may well calm tempers in the room, he (or she, there is after all one lady at the table) is highly unlikely to wield the leverage, clout or respect that el-Badri has commanded over his tenure.

As Kuwait prepares to hold the rotating presidency of the cartel, a stalemate over the Secretary General’s appointment, according to most here, is detrimental to “market stability”. How about it being detrimental to OPEC itself at a time when a medium term, possibly long term, rewriting of the global oil trade is perhaps underway?

That's all for the moment folks. Keep reading, keep it ‘crude’!