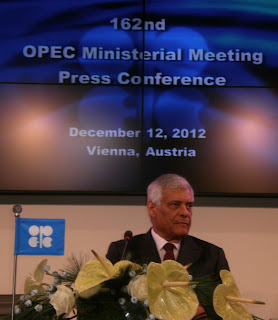 OPEC has maintained its production quota at 30 million barrels per day (bpd) following the conclusion of its 162nd meeting in Vienna, Austria. Member Iraq is yet to be included in the current daily production figure, while Libya would be shortly, it said.

The oil producers group also announced that current Secretary General Abdalla Salem el-Badri's term will be extended for one more year with effect from January 1, 2013 but did not assign any reason for the extension. Under existing norms, an OPEC Secretary General usually steps down after two terms in office.

Sources say, the unexpected move was down to the inability of OPEC members to unite behind a common candidate for the office of Secretary General. The issue has been in the background for some time now.

OPEC said it had reviewed the oil market outlook and the existing supply/demand projections for 2013 in particular. It added that ministers had noted the price volatility witnessed throughout 2012, which in its opinion "remained mostly a reflection of increased levels of speculation in the commodities markets, exacerbated by geopolitical tensions and, latterly, exceptional weather conditions."

It also observed mounting pessimism over the global economic outlook, with downside risks continuing to be presented by the sovereign debt crisis in the Eurozone, high unemployment in the advanced economies and inflation risk in the emerging economies.

Hence, OPEC delegates noted that although world oil demand is forecast to increase marginally during the year 2013, this is likely to be more than "offset by the projected increase in non-OPEC supply" and that projected demand for OPEC crude in 2013 is expected to contract to 29.7 million bpd. This, it said, was "largely behind" its decision to maintain the current production level.

OPEC added that "member countries would, if necessary, take steps to ensure market balance and reasonable price levels for producers and consumers." In taking this decision, member countries confirmed that they will swiftly respond to developments that might have a detrimental impact on an orderly oil market.

Apart from an extension of el-Badri’s tenure, OPEC has appointed Yasser M. Mufti, Saudi Arabian Governor for OPEC, as Chairman of the Board of Governors for 2013, and Ali Obaid Al Yabhouni, UAE Governor for OPEC, as Alternate Chairman for the same period, also with effect from January 1, 2013. OPEC said its next meeting will convene in Vienna, Austria, on May 31, 2013.

Despite persistent questioning by the assembled scribes about details on individual members' quotas, OPEC did not divulge them or how they will be enforced. That's all from the OPEC HQ! Keep reading, keep it 'crude'!