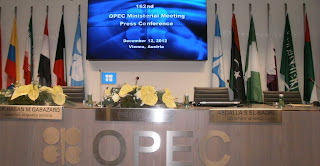 The delegates and ministers have walked in, the press scrum (or should you choose the term g*ng b*ng) is over and the closed door meeting has begun – all ahead of a decision on production quotas and the possible appointment of a new secretary general.

Smart money is on OPEC maintaining output at its current level of 30 million barrels per day (bpd), with the Saudis curbing their breaches of set quotas and the cartel reporting a real terms cut in November. No one smart would put money on who the new OPEC Secretary General might be.

But before that, there are as usual some leaks here and some soundbites there to contend with. These generally nudge analysts and journalists alike in the general direction of what the decision might be. Arriving in Vienna ahead of the meeting, Saudi Arabia’s oil minister Ali al-Naimi, the key man at the table, shunned the international media to begin with and chose to issue a statement via his country’s national press agency.

In his statement, Naimi said the main aim of the December 12 meeting is to keep the balance of the global crude markets in order to serve the interests of producers and consumers. He added that balancing the market will help the growth of the global economy. Since then, he has maintained the same line in exchanges with journalists.

As expected, the Iranians feel a cut in production was needed, saying their fellow members are producing 1 million bpd more than they ought to be. Iran said OPEC’s statement last month, that economic weakness in some major consuming countries could shave off 20% from its global demand growth outlook for 2013, lends credence to their claim. However, a delegate admitted there was "little need to change anything" and that the current US$100-plus OPEC basket price was "ok."

Walking in to OPEC HQ, UAE Energy Minister Mohammad bin Dhaen al-Hamli told the Oilholic that he "hopes to solve" the issue of who will be the next Secretary General. Libya's new oil minister Abdelbari al-Arusi, said he was "happy with OPEC production levels.”

Meanwhile, two key men are not in Vienna – namely Kuwait’s oil minister Hani Abdulaziz Hussein and Venezuela’s Rafael Ramirez. According to a Venezuelan scribe, the latter has sent Bernard Mommer, the OPEC representative for Venezuela’s oil ministry, in his place so he could support President Hugo Chavez, who is undergoing cancer surgery in Cuba. Ramirez added that Venezuela did not believe it was necessary for OPEC to increase production quotas and that the market was “sufficiently” supplied.

Finally, in his opening address, Iraqi oil minister and president of the conference Abdul-Kareem Luaibi Bahedh said OPEC faces a period of continuing uncertainty about the oil market outlook. "To a great extent, this reflects the lack of a clear vision on the economic front. The global economy has experienced a persistent deceleration since the beginning of the year...In the light of this, world oil demand growth forecasts for this year have been revised down frequently," he added.

Turning to the oil price, he said it had strengthened in the six months since June. "For its part, OPEC continues to do what it can to achieve and maintain a stable oil market...However, this is not the responsibility of OPEC alone. If we all wish to benefit from a more orderly oil market, then we should all be prepared to contribute to it. This includes consumers, non-OPEC producers, oil companies and investors, in the true spirit of dialogue and cooperation," said the Iraqi oil minister.

It also added that OPEC supply rose by "a marginal" 75,000 bpd to "31.22 million bpd". IEA said the OPEC crude supply increases were led by Saudi Arabia, Angola, Algeria and Libya but offset by recent production problems in Nigeria. Keep reading, keep it 'crude'!