There's something about Mr El-Badri

The predictable materialised yet again as OPEC held its quota at 30 million barrels per day following the conclusion of its 165th meeting of ministers. To be honest that's not what the Oilholic hit town for; quota situation was a done deal in most eyes!

In fact this blogger was wondering if we'll have some movement on the appointment of a new secretary general. Arriving in the Austrian capital last night, one heard whispers that Nigeria's petroleum minister Diezani Kogbeni Alison-Madueke was lobbying really hard for the post. Politics and merits aside, such an appointment – should it have happened – would have seen a welcome female Secretary General at the 12 member oil exporters' club. 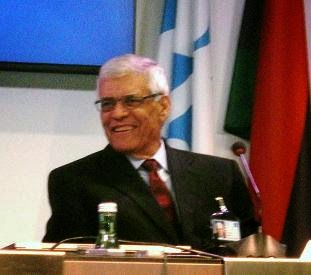 As such, it turned out to be hot air, at least for this meeting. Instead, the 74 year-old Libyan industry veteran and current Secretary General Abdalla Salem El-Badri saw his term extended yet again. The latest extension takes him through to June 30, 2015 having been first elevated to the post on January 1, 2007. That's coming up to some record for holding the post.

In fact, by this blogger's calculation, the latest extension makes him the longest serving OPEC Secretary General of all time. The reason for the appointment extension is the same as it was at the last meeting, and the one before and so it goes. There is simply no compromise candidate that the two major camps, led by the Saudis and the Iranians can agree on. She might be lobbying hard for the post, but Alison-Madueke's quip to a newswire journalist about the Secretary General being "appointed by consensus" rings true.

And when there is no consensus, you ring for Mr El-Badri. That's what OPEC has done time and again for this powerful post of late. In more, ways than one, El-Badri is a real trooper and the ultimate compromise candidate. He exudes confidence, has a sense of humour, can tackle or swat down often awkward questions hurled at him by scribes, makes the best of an often bad situation and gets along with most.

The Oilholic remembers from his last outing to OPEC HQ when El-Badri was given an ironic round of applause by journalists to bid him farewell, full well in the knowledge that yet again OPEC had failed to name a successor. However, he maintained his sense of humour and went through the entire press conference without as much as a twitch.

Perhaps in appointing him back in 2007, OPEC raised the bar very high. Prior to his arrival at OPEC, the University of Florida educated El-Badri served as Libya's minister for oil and electricity. This was followed by several ministerial stints including one as deputy prime minister from 2002 to 2004.

After assuming the Secretary General's position, El-Badri handled some real challenges and a term that began with oil price first spiking above US$140 per barrel and then dipping below $40, followed by the worst financial crisis in modern history. That the current Secretary General has acquitted himself with distinction is beyond doubt, but time has come for him to move on.

In its repeated failure to name a successor, OPEC isn't doing itself any good. Meanwhile, the decision to reappoint El-Badri was unanimous. To give the last word to the man himself: "My reappointment as OPEC Secretary General was down to the wisdom of ministers and I have no further comment to make."

And there you have it. That's all for the moment folks! Keep reading, keep it 'crude'!