Libya & OPEC’s “Will they, Won’t they” Routine 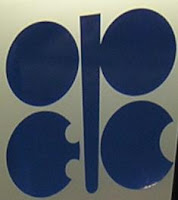 As the situation in Libya worsens, depending on differing points of view of Gaddafi goons and rebel fighters, OPEC’s routine of sending conflicting messages does not harm the price of crude – something which I don’t think the cartel minds all that much over the short term. In fact the OPEC basket price of crude seems to be following Brent’s price more closely than ever.

In a nutshell according to various newswires, Gaddafi militia and rebel fighters are toughing it out near oil terminals over 500km east of the capital Tripoli. Heaviest of the skirmishes have been outside (& within) the oil town Ras Lanuf, with both sides claiming a position of strength. A rebel spokesperson even gave out a statesman like statement, telling the BBC they would “honour” oil contracts.

However, anyone looking towards OPEC to calm the markets got a ‘crude’ response and mixed signals in keeping with the cartel's well practised drill of letting the wider world indulge in a guessing game of whether a production increase was on cards or not. The Saudis sought to calm, the Venezuelans and Iranians tried to confuse and the rest were quite simply confused themselves.

Moving away to a corporate story, pre-tax profits announced last week by UK independent upstart Tullow Oil have jumped 361% to US$152 million with a 19% rise in revenues to US$1 billion in the year to 31 December. In a statement to investors, its chief executive Aidan Heavey said the outlook was "very positive". I’d say its much more than that sir!

Finally, one of UK’s signature refineries – Pembroke – would now be a proud member of San Antonio, Texas-based refining major Valero Energy Corp. That’s after its current owner Chevron announced on March 11 that Valero had agreed to pay US$730 million for the refinery and US$1 billion for the assets. Ratings agency Moody's views Valero's acquisition of Pembroke and associated marketing and logistics assets as credit neutral. It may well be noted that it took Chevron nearly a year to...ahem....get rid of it (??)