There’s Something about the Chronicle 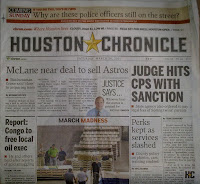 The largest daily newspaper in Texas – is still the Houston Chronicle, but while its reach extends well beyond the city, its character is uniquely Houstonian. It is that and that alone, makes the paper Oilholics approved.

The content or better still – the coverage is much attuned to crude developments local, global or should we say glocal. You might say that in a town with deep historic ties with the oil & gas business that should not come as a surprise. However, it is how the coverage is slanted and present which I love reading both online and well nothing beats a paper copy when you can get a hold of it.

So on this visit to Houston, I see The Chronicle split as front section, city & state, sports, business (my favourite), the ‘Lone Star’ and classifieds and on Mar 26th there were four ‘crude’ stories. One mute point - the Hearst Corporation has owned it since 1987 and according to local sources it employs over 2000 people including 300 fellow scribes. 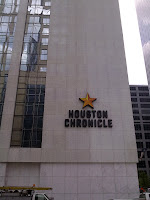 The publication will celebrate its 110th anniversary in October this year, and seeped in its rich history is the fact that Jesse Holman Jones, a local politician, US Secretary of Commerce during World War II and President Hoover’s stalwart for reconstruction and development owned/published the publication from 1926-56.

The late Jesse H. Jones' life is celebrated and commemorated in several monuments (and parks) in the city, but The Chronicle’s connection with the great man is a unique component of his legacy to his city & his country. While retaining the title of publisher until his death in 1956, Jones passed on the ownership to a trust in 1937.

Sources suggest it has over 70 million page views in the internet age and amen to that! I had the pleasure of walking past its modern downtown headquarters earlier and couldn’t but help clicking the imposing building.