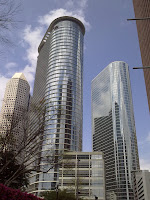 If you happen to be in downtown Houston, can you afford to miss 1500 Louisiana Street? It is not as if the building is the tallest in town. In fact, I am reliably informed that it is the 17th tallest.
Quite simply the infamy that Enron came to signify for corporate America in general and the energy business in particular has given the building a place in history that it neither craves at present nor ever sought in the past.
In fact prior to its collapse, Enron wanted 1500 Louisiana Street to be its headquarters but never actually occupied it in wake of its corporate scandal in October 2001. Following Enron’s collapse, the building’s leasing company touted it to quite a few including ExxonMobil next door but to no avail. Finally, in 2005 ChevronTexaco bought the building and moved its Houston offices there.
The Oilholic couldn’t but help note with a wry chuckle this morning when an “out of towner” like him enquired of a rather irritated Chevron security guard whether the building was where Enron used to be.
Enron never formally entered the building, but it seems the ghost of Enron never left. That’s judging by number of people outside clicking photos away in the three mornings that I have walked past it since arriving in Houston! So here's mine in keeping with that spirit.
© Gaurav Sharma 2011. Photo: 1500 Louisiana Street, Houston, Texas, USA © Gaurav Sharma, March 2011
Posted by Gaurav Sharma at 3/26/2011 04:10:00 am