It is difficult to say whether Texans in general and Houstonians in particular are more irritated or more disappointed with BP. Perhaps the answer is a combination of both, but anti-British the Texans are not. Many here feel let down by the company, a sentiment which had already been on the rise following the Texas City refinery blast in March 2005. News that the company is now trying to sell the asset does not assuage that feeling here.

Many opine that when things were going horribly wrong in the Gulf of Mexico, BP could have done better, sought more cooperation from the government and not insisted it can handle things on its own. Some also blame their government of complacency for not intervening sooner and forcing BP’s hand.

Nearly a year on, while a sense of disappointment has not subsided, no one here seriously believes BP has turned its back on a lucrative American market – a withdrawal from refining and marketing ends of the business is more likely. I think it is a dead certainty from a strategic standpoint.

Now this ties in nicely to the company’s "Beyond Petroleum" campaign from a few years back. There was a fair bit of scepticism about it in England and elsewhere. However, it seems the company continues to go beyond petroleum in Houston. In 2006, BP said it would set up its alternative energy business in Houston on top of an existing solar business in Frederick, Maryland. 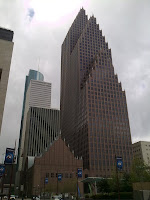 Five years hence and despite all what has happened, it is still going or rather has been kept going based on the 33rd floor of this city’s iconic Bank of America Center building on 700 Louisiana Street (see left). Asked about its prospects, the company did not return the Oilholics’ call. However, I visited the iconic building anyway courtesy of other occupants, especially Mayer Brown LLP, for which I am grateful.

The next 12 months are crucial for BP. Americans are a largely forgiving bunch, but as Texans say forgiving is one thing, forgetting is another matter! And many have pointed out their disgust at Transocean and Halliburton too. Unfortunately for BP – the 'crude' muck stops with them.