In the Realm of Crude “What Ifs”

Last time I checked the ICE Brent forward month futures contract was trading at US$110.46 per barrel up US$4.68 or 4.43% in intraday trading (click on chart to enlarge). It is my considered belief, since fundamentals do not support such a high price at this moment in time that there is at least US$10 worth of instability premium factored in to the price.

Given the number of “what if” analysts doing the rounds of the TV stations today, it is worth noting with the Libyan situation that not only are supply concerns propping up the price but the type of crude that the country supplies is also having an impact. I feel it is the latter point which is reflected more in the crude price than supply disruption. Light sweet crude is the most cost effective variety to refine and while Libyan crude is not as good as American light sweet crude, it is still of a very good quality relative to its OPEC peers.

Now, if exporters such as Saudi Arabia talk of making up the short supply, not all of the Libyan export shortfall can be compensated for with a type of crude the country exports. This is what the speculators are factoring in, though it is worth stating the obvious that Libya is the world 12th largest exporter of crude.

Furthermore, the age-old “what if” question is also hounding trading sentiment, i.e. “What if the house of Saud collapses and there is a supply disruption to the Saudi output?” The question is not new and has been around for decades. Problem is that a lot of the “what ifs” in Middle East and North Africa have turned to reality in recent weeks. If the House of Saud were to fall, it will be a geopolitical impact on crude markets of a magnitude that we have not seen since the Arab oil embargo.

Elsewhere at the International Petroleum Week, advisory firm Deloitte revealed its second full year ranking of UK upstream independent oil companies by market capitalisation. The top three are Tullow, Cairn and Premier Oil in that order, a result similar to end-2009. Tullow’s strength in Ghana helped it to maintain top spot in the sector. Its £11 billion market capitalisation is more than twice the valuation of its closest rival Cairn Energy, which in turn is more than twice the size of third placed Premier Oil. (Click on table below to enlarge) 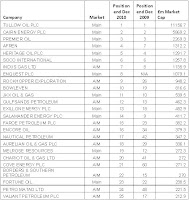 Cairn continues to excite after agreeing to sell its Indian interests to Vedanta last year and concentrating on Arctic exploration. However, its drilling off the coast of Greenland has yet to yield anything ‘crudely’ meaningful. Another noteworthy point is the entry of Rockhopper Exploration, which is prospecting for crude off the coast of the Falkland Islands, into the top ten at 9th (up from 26th at end-2009).

“We have seen a great deal of volatility in the ranking showing the transformational growth achievable through exploration success. Overall, 2010 was a year of recovery for the UK upstream independent oil and gas sector, with rising oil prices and greater access to capital improving investor sentiment in the sector,” says Ian Sperling-Tyler, associate partner of energy transaction services at Deloitte.

“The improved environment was reflected in a 28% increase in the market capitalisation of the 25 biggest companies in the sector from £25.3 billion to £32.2 billion. In contrast, the FTSE 100 posted a 9% gain,” he adds.
Moving away from UK independent upstarts to a British major’s deal with an Indian behemoth. Following the BP/Reliance Industries Limited (RIL) announcement about a joint venture, ratings agency Moody's has changed the outlook of the Baa2 local currency issuer rating of RIL from stable to positive. RIL's foreign currency issuer and debt ratings remain unchanged at Baa2 with a stable outlook, as these are constrained by India's sovereign foreign currency ceiling of Baa2.

The rating action follows the company's recent announcement of a transformational partnership agreement with BP that will see the British major take a 30% stake in RIL's 23 Indian oil and gas blocks, including the substantial KG D6 gas field, for an initial consideration of US$ 7.2 billion plus further performance related payments of up to US$ 1.8 billion.

Philipp Lotter, a Senior Vice President at Moody's in Singapore believes the partnership agreement has generally positive credit implications for RIL, both operationally and financially. "The decision to bring on board BP in support of India's domestic gas market development will benefit RIL from BP's deep-water drilling expertise, as well as allow it to share risks and costs of future exploration and infrastructure projects, thus significantly de-risking its upstream exposure," he adds.

However, according to Moody's it is worth noting that the outlook could revert back to stable, if RIL undertakes transformational debt-funded acquisitions, or allocates material liquidity to finance growth that entails higher business risk. A deterioration of retained cash flow to debt below 30% is also likely to reverse any upward rating pressure.