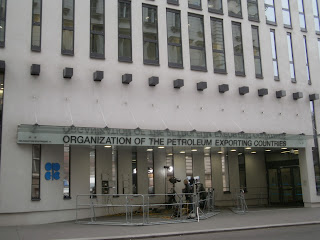 It’s not official yet, but highly likely that an OPEC quota cut is not on cards as the Saudis won’t budge and the Iranians, hoping to return to the international fold, aren’t keen on a cut either.

That’s unless other non-OPEC producers, most notably the Russians come on board too. It is the latter part that’s the tricky bit. It ain’t happening at the moment, but could it happen at some point 2016?

Not likely, says our old friend Jason Schenker, President of Prestige Economics. "They might meet and greet, talk on the sidelines. But chatter of a possible joint policy announcement [with Russia] seems pretty far fetched to me."

To The Oilholic, it seems the Saudis want to see how demand goes in the early part of 2016, before possibly backing a cut. Were that to be the case, the good folks in Riyadh reckon they would quite literally get more bang for their bucks.

For the moment, don’t expect much, as yours truly reported for Sharecast. In the interim, here’s the current mantra of OPEC’s Middle Eastern producers, as one wrote for Forbes – i.e. discount the competition to death.

Either way, there appears to quite a bit of intraday short covering going on at moment, which to me suggests the market is bracing for a no change scenario here in Vienna, before an almighty cry of “Short, baby short” once OPEC actually confirms that it will not be cutting.

That’s all for the moment from Vienna folks, plenty more from here shortly! In the interim, keep reading, keep it ‘crude’!

Update: 1600 CET OPEC Press Conference delayed; ministers have broken up for second session according to sources