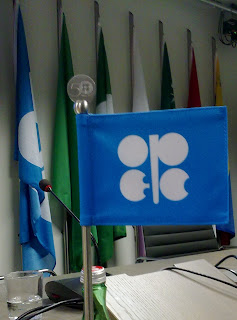 The Oilholic reckons it will take at least another six months in the New Year to ease the current oil oversupply glut. More so, as OPEC is highly likely to maintain its current production level, according to initial conjecture here in Vienna, Austria with the latest oil ministers’ summit currently underway.

That would probably take us to somewhere around June 2016, when we’ll see excess supply falling to somewhere in the region of 1 million barrels per day (bpd). Be that as it may, even such a decline might not be enough to bring the so-called risk or geopolitical premium into play.

Last week, offered a clear case in point when the Turkish Air Force brought down a Russian fighter jet. Both countries are significant players in the oil and gas world – Turkey, is a custodian of the key shipping artery of the Bosphorus, and Russia, is the world’s leading oil and gas producer.

Yet, an oil futures "rally" in wake of the incident barely lasted two sessions and a few dollars, before oversupply sentiment returned to dictate market direction as per the current norm. Furthermore, both Brent and WTI futures are going sideways in the $40-45 per barrel range, as has been the case of late.

Flashpoints in the oil and gas world haven’t disappeared. Nigeria, Libya, West’s relations with Russia and Iraq are broadly where they were, if not worse. In fact, situation in the wider Middle East is pretty dire. Yet, the risk premium - so prevalent in the oil trade - is more or less nonexistent in a market struggling to park its barrels.

That will remain the case until excess supply falls to around 700,000 to 800,000 bpd. Even beyond the first half of 2016, few expect a dramatic uptick in oil prices, using Brent as a global proxy benchmark. At Fitch Ratings’ recent London Energy Seminar, this blogger found himself in the company of several experts who agreed that $60-level is unlikely to be capped before the end of 2016.

Alex Griffiths, Head of Natural Resources and Commodities at Fitch Ratings, Tim Barker, Head of Credit Research at Old Mutual Global Investors, Julian Mylchreest, Global Head of Energy at Bank of America Merrill Lynch, and Mutlu Guner, Executive Director at Morgan Stanley, all agreed there is little around to instil confidence in favour of a fast uptick above $60 being on cards within 12 months time.

Moving away from the oil price, Genscape Oil Editor David Arno’s thoughts on the impact of Keystone XL’s rejections by the Obama administration, chimed with yours truly. Rail freight companies would undoubtedly be the biggest beneficiaries. In his blog post following the decision last month, Arno also felt denial of the pipeline provides rail shippers with “at least a year and a half more of comfort that Canadian rail opportunities will be needed.”

Finally, a couple of notes from Moody’s are worth flagging. The agency recently changed Kinder Morgan's outlook to negative from stable. Senior Vice-President Terry Marshall said the negative outlook reflects Kinder Morgan's increased business risk profile and additional pressure on its already high leverage that will result from its agreement to increase ownership in Natural Gas Pipeline Company, a distressed company.

On November 30, Kinder Morgan announced an agreement to increase its ownership in NGPL of America to 50% from 20% for approximately $136 million. Brookfield Infrastructure Partners will own the remaining 50%. Proportionate consolidation of NGPL's debt will add about $1.5 billion to KMI's consolidated debt. NGPL's trailing twelve month September 30, 2015 EBITDA was $273 million (gross).

Moving on to state-owned crude giants, Moody's also said China National Petroleum Corporation's (CNPC) proposal to sell some of its pipeline assets is credit positive, as profits and proceeds from the sale will partially offset negative impact from low crude oil and gas prices and help preserve its financial profile during the current industry downturn.

However, Moody’s said the sale has no immediate impact on its ratings and outlook as the benefits “are marginal, given CNPC's extremely large revenue and asset size.” Nonetheless, the ratings agency expects sale proceeds to help CNPC fund the gap between its capital expenditure and operating cash flow and therefore lower its reliance on additional debt to fund its growth.

The actions were prompted by Moody's view that the company's current weak credit metrics will "deteriorate further in the near to medium term. The outlook on all ratings was changed to negative." That’s all for the moment folks from Vienna folks, as the Oilholic finds his bearings at yet another OPEC summit. Plenty more from here shortly! In the interim, keep reading, keep it ‘crude’!