OPEC quota where it was, no figures needed 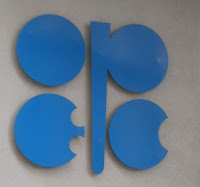 OPEC decided to roll over its 'previous quota' published at 30 million barrels per day, but declined to put a figure in its official communique issued at the conclusion of its 168th ministers' meeting in Vienna, Austria.

"OPEC will wait and see how the market develops" over the next six months and saw no need to alter the current production level during a period of market adjustment, he added, having been asked to stay on as "acting" Secretary General until July 2016.