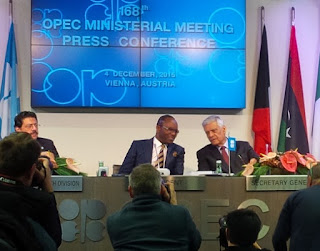 Having been to every single OPEC ministers’ summit since 2008, the Oilholic thought he’d seen it all. Not quite it seems; when the 168th meeting of ministers ended – for the very time since yours truly had been here, the oil producers collective failed to mention its production quota. Here’s a link to the communiqué on December 4, that's historic for all the wrong reasons!

In farcical fashion the market was left guessing what OPEC’s actual production is based on previously published data and anecdotal evidence. OPEC itself puts the quota at 30 million barrels per day (bpd). Until recently, while Saudi Arabian production was in overdrive, 31.88 million bpd was the industry consensus, and barely days before the OPEC meeting convened a Bloomberg survey put the figure at 32.1 million bpd.

Bulk of the incremental OPEC barrels are coming from Saudi Arabia and Iraq, with discounting by all 12 members in full swing, as the Oilholic wrote on Forbes. Now Iran, eyeing a meaningful return to the international fold, is also not in favour of production cuts, unlike on previous occasions. It is not just the analyst community that is in uncharted waters, the producers’ group itself appears to be pretty dazed.

OPEC has not published a target oil price since 2004. Then in December 2008, it ceased publication of individual members’ quotas leaving the market to second guess the figure. All we know is that Iraq and Libya are currently not included in the headline quota. Now it seems OPEC will not even reveal what its daily production target is. It is all pretty strange and quite unlike any cartel in the world, if you feel OPEC should be described as such.

No slide rule or calculator was required in working out the stalemate in Vienna would be short-term bearish! There’s just too much oil in the market. In fact, latest surveys suggest we are seeing nearly 2.6 – 2.9 million bpd of surplus oil, double of 1.3 million bpd estimates earlier in the year.

At this rate it would be well into 2016 before supply adjustment occurs, which means that oil price will remain in lacklustre mode. Only saving grace is that a steep decline for Brent below $40 per barrel was not a high probability unless there is a global financial tsunami; even though the global proxy benchmark did briefly fall below the 40-level in intraday trading today.

Expect an uptick next year, but the undeserved oil price heights of Q1 2014 won’t be touched anytime soon. That’s all from Vienna folks. Keep reading, keep it ‘crude’!