Oil price dip & those tankers on the horizon 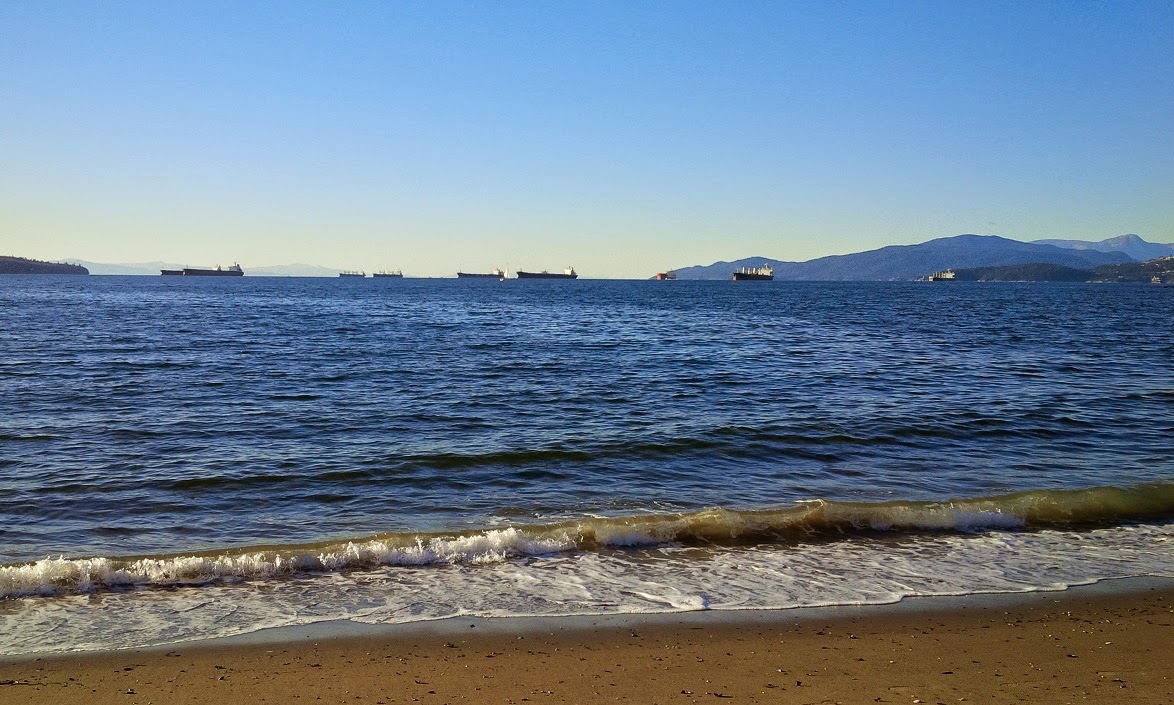 Crude year 2015 has well and truly begun with the oil price slipping several notches further, as tankers begin carrying their January cargo that is worth considerably less than it was 12 months ago.

With the full trading week to Jan 9 seeing an uptick in trading volumes back to normal levels after the festive period, the Oilholic spent a day looking at tankers in English Bay on a beautiful sunny afternoon in Vancouver, British Columbia, Canada. Most of these behemoths (see left, click to enlarge photo) ferry Canadian crude to Asian markets finding their way to the vastness of the ocean from Vancouver's Burrard Inlet.

As tankers disappeared away from eyesight and yet more dotted the landscape, one's first 5-day assessment of this year saw Brent down 11.44% on the week before, WTI -8.2% and the OPEC Basket a whopping -16%. For now, the Canadian oil and gas industry is holding up pretty well and strategically bracing itself for a further drop in price to as low as US$35 per barrel.

Beyond that, of course all bets are off. Whatever the price, local environmental lobby groups don’t quite like these tankers “blotting the coastline of beautiful British Columbia” to quote one. Data suggests traffic has risen seven-fold since 2001. Of course, the oil being shipped isn’t local as British Columbia doesn’t have too much of its own.

Rather, as many of you would know, all of it is piped in from Alberta by Kinder Morgan to its Westport Terminal on the South East shoreline of Burrard Inlet in Burnaby. The company is the middle of a full on bid to increase pipeline capacity. However, standing on the beach, more than one environmentalist would tell you that a spill was inevitable, especially if you happen to declare you are an energy analyst.

Yet, both major incidents over the last ten years have been on land and weren’t down to the crude behemoths of the sea. In 2007, a construction mishap saw a Kinder Morgan pipeline break in Burnaby spilling oil into the Burrard Inlet while dousing some 50 homes in the neighbourhood with the crude stuff.

Nearly two years later, a storage tank spilt 200,000 litres of oil on Burnaby Mountain. Thankfully, a containment bay prevented spillage into the wider environment. All this might not help Kinder Morgan's medium term public relations drive, but the volume of traffic and cargoes, even with the existing pipeline capacity, isn’t going to ebb over 2015 unless the global economy sees a severe downtown.

If the Russians, Americans and Saudis are in no mood to lower production, the Canadians aren’t going to either, according to anecdotal evidence. The Oilholic’s thoughts on how an oil price below $60 might well hit exploration and production in Canada (and elsewhere) are here in a Forbes piece one wrote earlier.

This blogger does see an uptick in price from around the halfway point of 2015, as a supply correction is likely to kick-in. For the moment, barring a financial tsunami knocking non-OECD economic activity, the Oilholic's prediction is for a Brent price in the range of $75 to $85 and WTI price range of $65 to $75 for 2015. Weight on Brent should be to the upside, while weight on WTI should be to the downside of the aforementioned range.

Come Christmas, we should be looking at around $80 per Brent barrel. One thing is for sure, the days of a three-figure price aren’t likely to be seen over the next 12 months. That’s all for the moment folks! Keep reading, keep it ‘crude’!