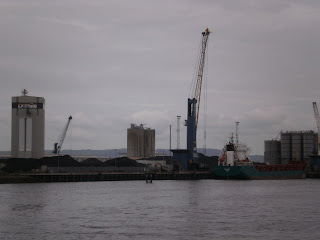 Walk past Belfast’s Titanic Quarter and look left towards the loading docks of the harbour bordering the River Lagan and you’ll see a number of ships unloading coal. Nothing unusual, except that the usage of this age-old, but now unfashionable, fossil fuel is fast becoming uneconomical in the US courtesy of the country’s shale bonanza. So some of it is landing up on European shores and on harbours such as Belfast’s.
The coal [pictured above left] is heading to AES's Kilroot Power Station, according to a local harbour official. Recent investments in deep-water facilities by Belfast Harbour have enabled it to handle coal imports in increasing numbers. But for how long one wonders, as the province’s own oil & gas boom and a mini shale gas bonanza might be on the cards.
Being in Northern Ireland for the G8 2013 Summit, gave the Oilholic a pretext to examine local 'crude' moves on an up close and personal basis. Perhaps unsurprisingly, this blogger found that hydrocarbon prospection in this part of the world has its own set of promoters and worriers, akin to any other jurisdiction.
So what’s the story so far? Dublin-based Providence Resources is here, a firm that has already demonstrated the true of luck of the Irish by making a convincing case for oil & gas prospection in the Republic of Ireland. The company reckons, and with good reason, that there may be 500 million to 530 million barrels of oil under Rathlin Sound, off the north Antrim coast.
A spokesperson for the company told the Oilholic that it intends to drill an exploration well in 2014 to examine the site which it calls the Polaris Prospect. It has been eyeing the area - of roughly around 31 square kilometres - since last year. Surveys carried by Providence Resources under an exploration licence found "encouraging results."

The Rathlin Basin has always been considered prospective due to the presence of a rich oil prone source rock. However, the company adds that poor seismic imaging has historically rendered it difficult to determine the basin's "true hydrocarbon entrapment potential." Nonetheless, subject to regulatory approval, Providence Resources will embark on a drilling programme in 2014.
Additionally, Northern Ireland could have its own shale bonanza too. The village of Belcoo, near the border with the South, has plans for fracking. One has to be careful when speaking in a plural sense, as not everyone is in favour, with many having serious misgivings about shale exploration and its potential impact on the regional environment and the water table.
However, armed with the words – “Shale gas is part of the future and we will make it happen” – from UK Chancellor George Osborne’s 2013 budget speech, independent upstart Tamboran is banking on shale in Belcoo. Furthermore, the Treasury will give it a tax allowance for developing gas fields, and, for the next 10 years, leeway to offset its exploration spending against tax.
Tamboran and Providence Resources are not alone in making crude forays in Northern Ireland. Brigantes Energy, Cairn Energy, Infrastrata, Rathlin Energy and Terrain Energy are here too, armed with prospection licences granted by the regional Department of Enterprise, Trade and Investment (DETI) under the Petroleum Production Act of Northern Ireland of 1964. For the moment there is room for cautious optimism and nothing more.
You can bet on thing for sure, if the current shale and oil & gas exploration yields results then Belfast Harbour would see much less imported coal. That’s all from a memorable and wonderful visit to Northern Ireland folks! Keep reading, keep it ‘crude’!
To follow The Oilholic on Twitter click here.
To email: gaurav.sharma@oilholicssynonymous.com
© Gaurav Sharma 2013. Photo: Coal being unloaded on Belfast Harbour, Northern Ireland, UK © Gaurav Sharma, June 2013.
Posted by Gaurav Sharma at 6/24/2013 01:24:00 am