Sights & sounds from the G8 in Enniskillen 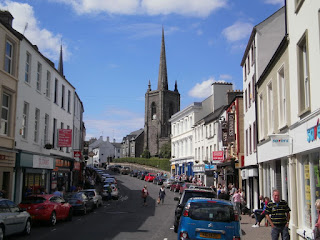 As the G8 circus prepares to leave town, with the Lough Erne Declaration firmly signed, it is time to reflect on the town and the folks who played host to the leaders of the eight leading industrialised nations. Wherever this blogger went, asked for directions, picked-up something in a shop, had a meal or a beer, you name it – he was greeted by helpful people with welcoming smiles.

The leaders’ motorcades were met with much gusto, especially by local school children “Welcoming the G8” even when there wasn’t a leader inside the cars zipping by! Bless them! On Monday, the townsfolk got a pleasant surprise to see President Barack Obama and Prime Minister David Cameron waving to them from a vehicle in the same motorcade.

Later, the two leaders also visited Enniskillen Integrated Primary School, attended by both Catholic and Protestant children, on the outskirts of Enniskillen. It was established, as a place of reconciliation and peace, in wake of the 1987 IRA Poppy Day bombing which resulted in 12 local fatalities. The bomb may have killed and maimed but didn’t break the community here, says one resident. The town itself got a complete makeover with every building spruced-up, primed and painted, according to locals and as is apparent.

However, like any other High Street in the British Isles, Enniskillen is no exception from the economic downturn, with retailers either going under or vacating premises. Yet, instead of boarding these shops up, their glass panes had a façade of wallpaper showing people and products inside, perhaps to convey a positive illusion for cars zipping past.

The protestors were here in numbers too, and in spirit as far away as Belfast and London. Everyone from anti-poverty campaigners to food scarcity examiners, from rights and environmental groups to fair trade advocates were here in numbers. Amnesty International’s protest ‘display’ on the arms-supplying shenanigans by G8 nations was the most eye-catching one for the Oilholic.

There is one mute point though. It seems the militant element largely stayed away and most of the protesters, barring few nutcases, engaged and sent their message out peacefully. That the Lough Erne Resort is surrounded by water supplemented by miles of metal fences, multiple security checkpoints and around 8,000 security personnel, certainly ensured the G8 2013 Summit saw far fewer protestors relative to the norm in recent years.

Swimming, sailing, paddling and canoeing in the waters around Lough Erne Resort were banned for the duration of the summit, but not fishing! That’s all from Enniskillen folks which is getting back to normalcy. Before his departure back to London via Belfast, the Oilholic leaves you with some views from the G8 summit through the lens of his non-professional but supremely effective automatic camera. Click on images(s) to enlarge. Keep reading, keep it ‘crude’!
﻿