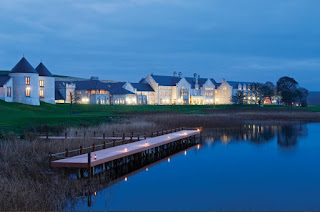 As predicted, Russia and the West's differing positions for and against supporting the Assad regime in Syria threatened to overshadow everything else at the G8 Summit here in Lough Erne Resort, Enniskillen, Northern Ireland but mercifully didn’t.

The leaders of the group of eight leading industrialised nations, meant to promote trade and dialogue at this forum, did make some progress and provided lots of hot air…er sorry…soundbites. The outcome of talks was grandiosely dubbed the 'The Lough Erne Declaration'. But before that, the European Union and the US finally agreed to 'start talks' on a new trade pact while not losing sight (or to the detriment) of ongoing negotiations with Canada.

The trade talks had been under threat from a potential French veto, but EU ministers agreed to their demand "or exclusion of the film and television industry from the talks". On to crude notes, the leaders thankfully did not indulge in silly talk of doing something to 'bring down the price of oil' (and leave it to market forces) just because the Brent contract is at US$100-plus levels.
There were also no wide-ranging discussions about price levels of crude benchmarks, apart from individual non-Russian grumbling that they should be lower. More importantly, the G8 thinks the state of their respective economies would hopefully act as a correcting mechanism on prices in any case. The leaders agreed that global economic prospects "remain weak".
Ironically, just as US Federal Reserve Chairman Ben Bernanke was issuing soundings stateside about easing-up on quantitative easing, they noted that downside risks have reduced thanks in part to "significant policy actions taken in the US, euro area and Japan, and to the resilience of major developing and emerging market economies".
The leaders said most financial markets had seen marked gains as a result. "However, this optimism is yet to be translated fully into broader improvements in economic activity and employment in most advanced economies. In fact, prospects for growth in some regions have weakened since the Camp David summit." You bet they have!
The Lough Erne declaration had one very significant facet with implications for the oil and gas industry along with mining. The G8 leaders said developing countries should have corporate identification data and the capacity to collect the taxes owed to them and other countries had "a duty to help them".
The move specifically targets extractive industries. It follows revelations that many mining companies use complex ownership structures in the Netherlands and Switzerland to avoid paying taxes on the natural resources they extract in developing countries. Hence, the G8 agreed that mining companies should disclose all the payments they make, and that "minerals should not be plundered from conflict zones".
Speaking after the declaration was signed, UK Prime Minister David Cameron said, "We agreed that oil, gas and mining companies should report what they pay to governments, and that governments should publish what they receive, so that natural resources are a blessing and not a curse." Good luck with that Sir!
And that dear reader is that! Here are the links to this blogger's reports for CFO World on tax, trade, economy and US President Barack Obama’s soundbites (to students in Belfast), should they interest you. Also on a lighter note, here is a report from The Sun about Obama's idiotic gaffe of calling UK Chancellor of the Exchequer George Osborne – "Jeffery" Osborne on more than one occasion and his bizarre explanation for it. 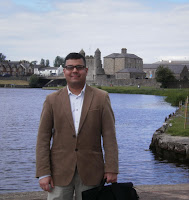 So the leaders' motorcades have left, the ministerial delegations are out and the police – who did a great job – are packing it in. Out of the eight leaders and EU officials in Lough Erne, the Oilholic felt Canadian PM Stephen Harper looked the most relaxed while German Chancellor Angela Merkel looked least cranky among her European peers. Guess they would be, as both economies are the only ones in the G8 still rated as AAA by all three ratings agencies.
That's all from Enniskillen folks! Should you wish to read the so called Lough Erne Declaration in full, it can be downloaded here. Despite the pressures of reporting, the buzz of a G8 Summit and the hectic schedule, yours truly could not have left without visiting Enniskillen Castle (above right) in this lovely town full of welcoming, helpful people with big smiles.

The location's serenity is a marked contrast from the Russians versus West goings-on at Lough Erne. It's a contrasting memory worth holding on to. And on Syria, both sides agreed to disagree, but expressed the urgency to hold a 'peace summit.' Sigh! Not another summit? Keep reading, keep it 'crude'!
To follow The Oilholic on Twitter click here.
To email: gaurav.sharma@oilholicssynonymous.com
© Gaurav Sharma 2013. Photo 1: Lough Erne Resort, Enniskillen, Northern Ireland © Invest NI. Photo 2: Enniskillen Castle, Northern Ireland © Gaurav Sharma, June 18, 2013.
Posted by Gaurav Sharma at 6/18/2013 11:56:00 pm