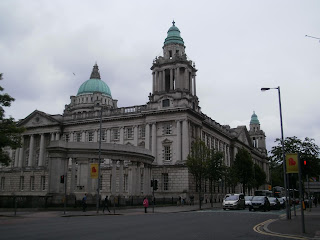 There is a certain measure of positive symbolism in being here in Northern Ireland for the 2013 G8 summit. Who would have imagined when the Good Friday agreement was signed in 1998, that 15 years later the then sectarian strife-torn province would host the leaders of the eight leading industrialised nations for their annual shindig?

That point was not lost on US President Barack Obama, among the few who didn’t express apprehensions, when UK PM David Cameron announced the venue for the summit last year. Cameron wanted to send a message out to the world that Northern Ireland was open for business and based on what yours truly has seen and heard so far, that's certainly a view many share.
Addressing an audience of students in Belfast, Obama said, "Few years ago holding a summit of world leaders in Northern Ireland would have been unthinkable. That we are here today shows the progress made in the path to peace and prosperity [since 1998]."

Here we all are in Belfast heading to a quaint old town called Enniskillen. Of course, the Oilholic won’t be making his way there in a style befitting a president, a prime minister or a gazillion TV anchors who have descended on Northern Ireland, but get there - he most certainly will - to examine the 'cruder' side of things.

It has barely been a year since the G8 minus Russia (of course) griped about rising oil prices and called on oil producing nations to up their production. "We encourage oil producing countries to increase their output to meet demand. We stand ready to call upon the International Energy Agency (IEA) to take appropriate action to ensure that the market is fully and timely supplied," the G7 said in a statement last August.

Of course since then, we’ve had the US 'Shale Gale', dissensions at OPEC and rising consumption of India and China according to the latest data. The smart money would be on the G7 component of the G8 not talking about anything crude, unless you include the geopolitical complications being caused by Syria, which to a certain extent is overshadowing a largely economic summit.

That wont be a shame because its not for politicians to fiddle with market mechanisms. Nonetheless, the Brent forward month futures touched a 10-week high close to US$107 a barrel on Monday before retreating. Despite a lull, if not a downturn, in OECD economic activity, the benchmark remains in three figures.

Syria's impact on oil markets is negligible, but a prolonged civil war there could affect other countries in the Middle East, worse still drag a few oil producers in. Yet a stalemate between Russian President Vladimir Putin and the West has already become apparent here at the G8. There will, as expected, be no agreement on Syria with the Russians supporting the Assad regime and the West warily fretting over whether or not to supply the Syrian rebels with arms.

Away from geopolitics and the G8, in an investment note to clients, analysts at investment bank Morgan Stanley said the spread between WTI and Brent crude will likely widen in the second half of 2013, with a Gulf Coast "oversupply driving the differential".

The banks notes, and the Oilholic quotes, "WTI-Brent may struggle to narrow below US$6-7 per barrel and likely needs to widen in 2H13 (second half 2013)." That’s all for the moment from Belfast folks, as the Oilholic heads to Enniskillen! In the interim, yours truly leaves you with a view of Belfast's City Hall. Keep reading, keep it 'crude'