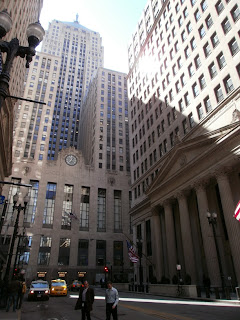 A visit to Chicago would not be complete without setting foot inside 141 West Jackson Boulevard – the Chicago Board of Trade’s (CBOT) iconic abode – and gathering the pulse of the market straight from the world's oldest futures and options exchange. Over 50 different options and futures contracts are traded here, including ‘cruder’ ones, via close to 4000 member traders both electronically and through open outcrys; so plenty to observe and discuss.

There was only one man though whom the Oilholic had in mind – the inimitable Phil Flynn of Price Futures Group, veteran market analyst and the doyen of the business news broadcasters. The man from the “South Side” of Chicago has never been one to sit on the fence in all the years that yours truly has been mapping his market commentary. And he wasted no time in declaring that the WTI could reassert itself in the Battle of the Benchmarks pretty soon.

“First, let’s take the Brent-WTI differential into perspective. It narrowed to US$13 at one point today [March 28] and it will continue to narrow, albeit in fits and starts. We’ll come back to this point. WTI’s claw-back in terms of market stature could be down to simple nuts and bolts stuff! The US could – and I think will – become a treble impact jurisdiction – i.e. one of the world’s largest consumer, producer and exporters of crude oil somewhere between 2015-2018; if you believe the current market projections. So what could be a better way to get a sense of the global energy market than to have all of that rolled into one contract?”

Flynn reckons people were behind the curve in awarding Brent a victory in the Battle of the Benchmarks. “Everyone says these days that Brent is more reflective of global conditions. My take is that they should have reached this conclusion five years ago and it’d have been fine! Yet now when the clamour for Brent being the leading benchmark is growing, market supply and demand dynamics are changing for the better here in the US and for the worse in the North Sea.”

The veteran market commentator says the period of Brent being a global benchmark will be akin to the "rise and fall of the Roman Empire" through no fault of its champions but rather that of "late adopters" who missed the pulse of the market which was ticking differently back in 2007-08 with the rise of Asian crude oil consumption.

“There is a lot of politics in anointing the ‘favoured’ benchmark. As a trader I don’t care about the politics, I go with my gut instinct which tells me the problems associated with the WTI – for instance the Oklahoma glut – are being tackled while Brent’s are just beginning. WTI is liquid, has broad participation and also has the backdrop giving an indication of what supply and demand is. Therein, for me, lies the answer.”

Flynn also feels the technicals tell their own story. In December, he called a WTI low of US$85 and the top at US$97 and was vindicated. “It is flattering to look like some kind of a genius but it was pure technical analysis. I think there was a realisation that oil was undervalued at the end of 2012 (fiscal cliff, dollar-cross). When that went away, WTI had a nice seasonal bounce (add cold weather, improving US economy). It’s all about playing the technicals to a tee!”

Flynn sees the current WTI price as being close to a short-term top. “Now that’s a scary thing to say because we’re going into the refining season. It is so easy to say pop the WTI above US$100. But the more likely scenario is that there would a much greater resistance at about the price level where we are now.”

Were this to happen, both the Oilholic and Flynn were in agreement that there could be a further narrowing between Brent and WTI - a sort of “a meeting in the middle” with WTI price going up and Brent falling.

“The WTI charts look bullish but I still maintain that we are closer to the top. What drives the price up at this time of the year is the summer driving season. Usually, WTI climbs in March/April because the refiners are seen switching to summer time blends and are willing to pay-up for the higher quality crudes so that they can get the switchover done and make money on the margins,” he says. 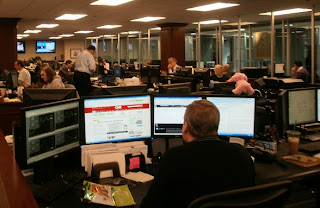 His team at Price Futures (see right) feels the US seasonal factors are currently all out of whack. “We’ve recently had hurricanes, refinery fires, the Midwest glut, a temporary gas price spike – which means the run-up of gasoline prices that we see before Memorial Day has already happened! Additionally, upward pressure on the WTI contracts that we see in March/April may have already been alleviated because we had part of the refinery maintenance done early. So barring any major disasters we ‘may not’ get above US$100,” he adds.

As for the risk premium both here and across the pond, the CBOT man reckons we can consider it to be broadly neutral on the premise that a US$10 premium has already been priced in and has been for some time now.

“The Iran issue has been around for so long that it’s become a near permanent feature. The price of oil, as far as the risk premium goes, reflects the type of world that we live in; so we have an in-built risk premium every day.”

“Market wizards could, in theory, conjure up a new futures gimmick solely on the “risk premium in oil” – which could range between US$3 to US$20 were we to have a one! Right now we have a US$7 to US$10 premium “near” permanently locked in. So unless we see a major disruption to supply, that risk premium is now closer to 7 rather than 10. That’s not because the risks aren’t there, but because there is more supply back-up in case of an emergency,” he adds.

“Remember, Libya came into the risk picture only because of the perceived short supply of the (light sweet) quality of its crude. That was the last big risk driven volatility that we had. The other was when we were getting ready for the European embargo on Iranian crude exports,” he adds.

With the discussion done, Flynn, with his customary aplomb, remarked, “Let’s show you how trading is done the Chicago way.” That meant a visit down to the trading pit, something which alas has largely disappeared from London, excluding the London Metals Exchange.

While the CBOT was established in 1848, it has been at its 141 West Jackson Boulevard building since 1930 and so has the trading pit. “Just before the Easter break, volumes today [March 28] are predictably lower. I think the exchange record is 454 million contracts set 10 years ago,” says Flynn.

As we stepped into the pit, the din and energy on the floor was infectious. Then there was pin drop silence 10 seconds before the pit traders awaited a report due at 11:00 am sharp...followed by a loud groan. 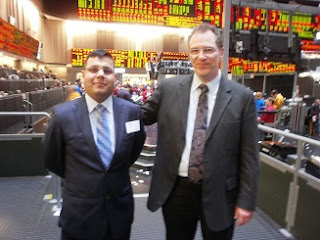 “No need to look at the monitors – that was bearish all right; a groan would tell you that. With every futures contract, crude including, there would be someone who’s happy and someone who’s not. The next day the roles would be reversed and so it goes. You can take all your computers and all your tablets and all your Blackberries – this is trading as it should be,” says Flynn (standing here on the right with the Oilholic).

In July 2007, the CBOT merged with the Chicago Mercantile Exchange (CME) to form the CME Group, a CME/Chicago Board of Trade Company, making it a bigger market beast than it was. Having last visited a rather docile trading pit in Asia, the Oilholic was truly privileged to have visited this iconic trading pit – the one where many feel it all began in earnest.

They say the Czar’s Russia first realised the value of refining Petroleum from crude oil, the British went about finding oil and making a business of it; but it is the United States of America that created a whole new industry model as we know it today! The inhabitants of this building in Chicago for better parts of 80 years can rightly claim “We’re the money” for that industry.

That’s all from the 141 West Jackson Boulevard folks! It was great being here and this blogger cannot thank Phil Flynn and Price Futures Group enough, not only for their time and hospitality, but for also granting access to observe both their trading room and the CBOT pit. More from Chicago coming up! Keep reading, keep it ‘crude’!