US LNG exports to the UK: The ‘Stateside’ Story

The Oilholic finds himself in Chicago IL, meeting old friends and making new ones! A story much discussed this week in the Windy City is US firm Cheniere Energy’s deal to export LNG to UK’s Centrica. More on why it is such a headline grabber later, but first the headline figures related to the deal.

The agreement, inked by Centrica and Cheniere on March 25, sees the latter provide 20-years' worth of LNG shipments starting from September 2018, which according to the former is enough to fuel 1.8 million British homes. 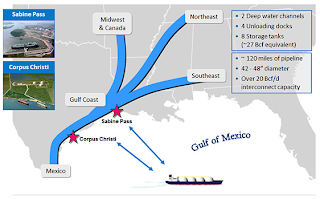 Centrica said it would purchase about 1.75 million metric tonnes per annum of annual LNG volumes for export from the Sabine Pass Project in Louisiana. (see Cheniere Energy’s graphic on the left, click image to enlarge). The contract covers an initial 20-year period, with an option for a 10-year extension.

Centrica, which owns utility British Gas, has fished overseas in recent years as the North Sea’s output plummets. For instance, around the 20th World Petroleum Congress in 2011, it inked deals with Norway’s Statoil and Qatar Petroleum. US companies have also flirted with the export market. So the nature of the deal is not new for either party; the timing and significance of it is.

According to City analysts and their peers here in Chicago, the announcement is a ground breaking move owing to two factors – (1) it’s the first ever long-term LNG supply deal for the Brits and (2) a market breakthrough for a US gas exporter in Europe.

Additionally, it blows away the insistence by the Russians and Qataris to link longer term supply contracts to the crude oil price (hello?? keep dreaming) instead of contracts priced relative to gas market movements. As for gas market prices, here is the math – excluding the recent (temporary) spike, gas prices in the UK are on average 3 to 3.5 times higher than the current price in the US. So we’re talking in the range of US$9.75 to $10.25 per million British thermal units (mmBtu). The Americans want to sell the stuff, the Brits want to buy – it’s a no brainer.

Except – as a contact in Chicago correctly points out – things are never straightforward in this crude world. Sounding eerily similar to what Chatham House fellow Prof. Paul Stevens told the Oilholic earlier this month, he says, “Have you forgotten the politics of ‘cheap’ US gas exports landing up on foreign shores? Even if it’s to our old friends the Brits?”

The US shale revolution has been price positive for American consumers – the exchequer is happy, the political classes are happy and so is the public which sees their country edging towards “energy independence.” (A big achievement in the current geopolitical climate and despite the quakes in Oklahoma).

The only people who are not all that happy, apart from the environmentalists, are the pioneers who persevered and kick-started this US shale gas revolution which was three decades in the making. To quote one who is now happily retired in Skokie, IL, “We no longer get more bang for our bucks anymore when it comes to domestic contracts.”

Another valid argument, from some in the trading community here in Chicago, is that as soon as US gas exports gain traction, bulk of which would head to Asia and not mother England, domestic prices will start climbing. So the Centrica-Cheniere deal, while widely cheered in the UK, has got little more than a perfunctory, albeit positive, acknowledgement from the political classes stateside.

In contrast, across the pond, none other than the UK Prime Minister David Cameron himself took to the airwaves declaring, “Future gas supplies from the US will help diversify our energy mix and provide British consumers with a new long term, secure and affordable source of fuel.”

The Prime Minister is quite right – the UK would rather buy from a ‘friendly’ country. Problem is, the friendly country might cool off on the idea of gas exports, were US domestic prices to pick-up in tandem with a rise in export volumes.

That’s all for the moment from Chicago folks! More from here over the next few days; keep reading, keep it ‘crude’!