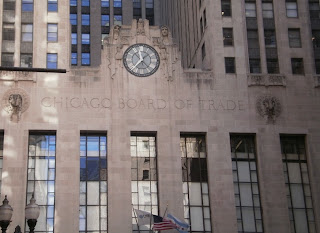 As trading came to a close for Q1 2013 at the Chicago Board of Trade (CBOT) on Thursday afternoon, the Oilholic saw crude oil futures rise during the last session of the first quarter aided undoubtedly by a weaker dollar supporting the prices. However, yours truly also saw something particularly telling – fidgeting with the nearest available data terminal would tell you that Brent crude futures slipped nearly 1 percent over Q1 2013. This extended a near-1 percent dip seen in Q4 2012. Overall, Brent averaged just around the US$112 per barrel level for much of 2012 and the Brent-WTI premium narrowed to its lowest level in eight months on March 28. That said, it must be acknowledged that US$112 is still the highest ever average annual price for the benchmark as far as the Oilholic can remember.

In its quarter ending oil market report, the CME/CBOT said improved sentiment towards Cyprus was seen as a supportive force helping to lift risk taking sentiment in the final few days before Easter. On the other hand, concerns over ample near term supply weighed on nearby calendar spreads, in particular the Brent May contract.

In fact, the May versus June Brent crude oil spread narrowed to its slimmest margin since July 2012. Some traders here indicated that an unwinding of the spread was in part due to an active North Sea loading schedule for April and prospects for further declines in Cushing, Oaklahoma supply.

Away from price issues, news arrived here that ratings agency Moody’s reckons an escalation in the cost of complying with US federal renewable fuel requirements poses a headwind for the American refining and marketing industry over the next two years (and potentially beyond if yours truly read the small print right).

Moody’s said prices were spiking for renewable identification numbers (RIN) which the US Environmental Protection Agency (EPA) uses to track whether fuel refiners, blenders and importers are meeting their renewable-fuel volume obligations.

Senior analyst Saulat Sultan said, "US refining companies either amass RINs through their blending efforts or buy them on the secondary market in order to meet their annual renewable-fuel obligations. It isn't yet clear whether recent price increases reflect a potential shortfall in RIN availability in 2014, or more structural and permanent changes for the refining industry."

The impact of higher RIN prices will depend on a company's ability to meet its RIN requirements internally, as well as the amount of RINs it can carry over to 2014 and gasoline export opportunities, Sultan says. Refiners carried over about 2.6 billion excess RINs to 2013 from 2012, but the EPA expects a lower quantity to be carried over to 2014.

"RIN purchasing costs can be sizable, even while refiners are generally enjoying a period of strong profitability, such as they are now. Integrated refining and marketing companies including Phillips 66, Marathon Petroleum and Northern Tier Energy LLC are likely to be better positioned than sellers that do not blend most of their gasoline, such as Valero Energy, CVR Refining LLC and PBF Energy, or refiners with limited export capabilities, such as HollyFrontier," Sultan added.

Concurrently, increasing ethanol blending, which is used to generate enough RINs to comply with federal regulations, raises potential legal issues for refiners. This is because gasoline demand is flat or declining and exceeding the 10% threshold (the "blend wall") could attract lawsuits from consumers whose vehicle warranties prohibit using fuel with a higher percentage. However, Moody's does not believe that companies will raise the ethanol content without some protection from the federal government.

Meanwhile, all the hot air about the ‘domestic dangers’ and ‘negative implications’ of the US exporting gas is getting hotter. A group – America’s Energy Advantage – has hit the airwaves, newspapers and wires here claiming that "exporting LNG carries with it the potential threat of damaging jobs and investment in the US manufacturing sector as rising exports will drive up the price of gas to the detriment of domestic industries."

So who are these guys? Well the group is backed by several prominent US industrial brands including Alcoa, Huntsman chemicals and Dow Chemical. Continuing with the subject, even though only one US terminal – Sabine Pass – has been permitted to export the fruits of the shale revolution, chatter in forex circles is already turning to shale oil and gas improving the fortunes of the US Dollar!

"For the past decade we have seen the US Dollar in decline, on a trade weighted basis. I believe the emergence of shale oil as a viable energy source looks set to have a considerable impact on the US dollar, and on the global economy as a whole," Shah said.

"Furthermore, a lower oil price will drive lower global headline inflation benefiting the US in particular - and a lower relative inflation rate will be a positive USD driver, improving the long-term purchasing power of the currency," he added.

The Russians are stirring up too. Last week, Gazprom and CNPC signed a 30-year memorandum to supply 38 billion cubic meters (bcm) to 60 bcm of natural gas from Eastern Siberian fields to China from 2018. The negotiations haven’t concluded yet. A legally binding agreement must be signed by June and final documents by the end of the year, covering pricing and prepayment terms. Let us see the small print before making a call on this one. On a related note, ratings agency Fitch says Gazprom is unlikely to offer any meaningful gas price concessions to another one of its customers – Naftogaz of Ukraine – in the short term owing to high spot prices for natural gas in Europe, currently being driven by the continued cold weather. 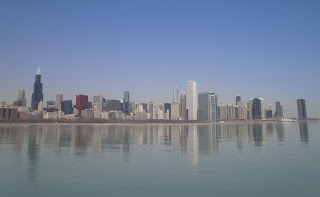 Sticking with the Russian front, Rosneft, which recently completed the acquisition of TNK-BP, has negotiated an increase in its oil shipments to China from the current 15mtpa to as much as 31mtpa in exchange for a pre-payment, and has agreed on a number of joint projects in exploration, refining and chemicals production with CNPC and Sinopec.

This is it for this post; it is time to bid goodbye to Chicago and Lake Michigan’s shoreline and hop 436 miles across the Great Lakes to say hello to Lake Ontario’s shoreline and Toronto. The Oilholic leaves you with a view of the waterfront and the city’s iconic buildings; the Willis Tower (once Sears Tower is on the left of the frame above).

It’s been a memorable adventure to Illinois, not least getting to visit  CBOT – the world’s oldest options and futures exchange. Leaving is always hard, but to quote Robert Frost – “I have promises to keep, and miles before I go to sleep.” That’s all from the Windy City folks! Keep reading, keep it ‘crude’!