On the final day of the 20th WPC, the Oilholic skipped the morning’s proceedings and headed to Dukhan oil & gas field nearly 60 km west of Doha at the invitation of Qatar Petroleum. This field is where it all began for Qatar’s oil & gas industry when oil was first discovered in 1938 and one is privileged to have been granted access to such a historic site.

Not only was access allowed, but Qatar Petroleum’s site supervisor Abdulla Mohamed Afifa spared his valuable time to both answer the Oilholic’s questions as well as accompany him around parts of the field and its gas recycling facility.

Oil was first discovered in Dukhan in 1938 at the very site this blogger stands sporting a Qatar Petroleum uniform and overalls (see left). While prospection fields were dug over 1939 and 1940, the first meaningful export of petroleum from Dukhan had to wait until after World War II in 1949.

A massive turnaround came in 1959 when natural gas was discovered in the Khuff Reservoir. The discovery at Khuff and what followed has since made the state of Qatar one of the biggest exporters of natural gas.

The Fahahil plant was commissioned to recover raw natural gas liquids (NGL) in 1974. Two years later, the first development well at Khuff reservoir was dug, and between 1978 and 1982 eight wellhead treatment plants were commissioned at Khuff alone. 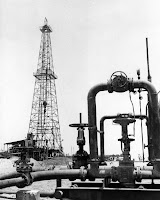 Several production stabilisation techniques have been employed in the last decade making Qatar Petroleum the world’s six largest oil company by barrels of oil equivalent at the time of writing this post. These days the field produces up to 336,000 barrels of crude/crude oil equivalent per day with future plans such as Dukhan Gas Lift project aimed at maintaining crude oil production.

The adjoining Dukhan city, which began life as a mere camp for Qatar Petroleum employees, is today a vibrant city boasting its own amenities, facilities, a service sector economy and not to mention a pristine beach. It is connected to Doha by Qatar's only four-lane motorway along which the Oilholic zipped down to see this site. Visiting Dukhan was a memorable experience much enriched by site supervisor Afifa’s insight about the field.