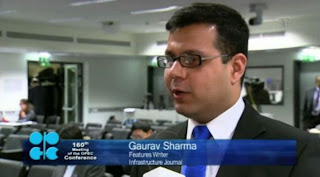 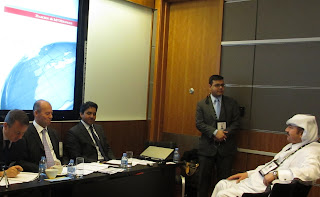 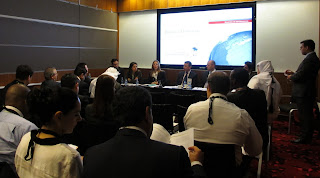 Now from crude sound-bites to crude market chatter post-OPEC, as the end of last week saw a major sell off. Despite the price of crude oil staging a minor recovery in Monday’s intraday trading; both benchmarks were down by over 4 per cent on a week over week, five-day cycle basis on Tuesday. Since the festive period is upon us, trading volumes for the forward month futures contracts will be at the usual seasonal low over the Christmas holidays. Furthermore, the OPEC meeting in Vienna failed to provide any meaningful upward impetus to the crude price level, which like all traded commodities is witnessing a bearish trend courtesy the Eurozone crisis.
Sucden Financial Research analyst Myrto Sokou notes that investors remained very cautious towards the end of last week and were prompted towards some profit taking to lock in recent gains as WTI crude was sliding down toward US$92 per barrel level.
“After market close on Friday, Moody’s downgraded Belgium by two notches to Aa3, as liabilities associated with the Dexia bailout and increased Eurozone risks were cited as key factors. In addition, market rumours on Friday of a France downgrade by S&P were not followed up, though the agency did have server problems during the day. Suspicion is now that they will wait until the New Year to conclude review on Eurozone’s second largest economy,” Sokou said in a note to clients.
Additionally, crude prices are likely to trade sideways with potential for some correction higher, supported by a rebound in the global equity markets. “However, should the US dollar strengthen further we expect some pressure in the oil market that looks fairly vulnerable at the moment,” Sokou concludes.
Away from pricing projections, the Reuters news agency reports that Libya has awarded crude oil supply contracts in 2012 to Glencore, Gunvor, Trafigura and Vitol. Of these Vitol helped in selling rebel-held crude during the civil war as the Oilholic noted in June.
On to corporate matters and Fitch Ratings has upgraded three Indonesian oil & gas utilities PT Pertamina (Persero) (Pertamina), PT Perusahaan Listrik Negara (Persero) (PLN) and PT Perusahaan Gas Negara Tbk (PGN) to 'BBB-' following the upgrade to Indonesia's Long-Term Foreign- and-Local-Currency Issuer Default Ratings (IDRs) to 'BBB-' from 'BB+'. The outlooks on all three entities are Stable, agency said in a note on December 15th.
Meanwhile, a Petrobras communiqué suggests that this December, the combined daily output of the Brazilian major and its partners exceeded 200,000 barrels of oil equivalent per day (boe/day) in the promising Santos Basin. The company said that on December 6, two days after operations began at well RJS-686, which is connected to platform FPSO Cidade de Angra dos Reis (the Lula Pilot Project), the total output operated by Petrobras at the Santos Basin reached 205,700 boe/day.
This includes 144,100 barrels of oil and condensate, in addition to 9.8 million cubic meters of natural gas (equivalent to an output of 61,600 boe), of which 8.5 million cubic meters were delivered to the Monteiro Lobato Gas Treatment Unit (UTGCA), in Caraguatatuba, and 1.3 million cubic meters to the Presidente Bernardes Refinery (RPBC) Natural Gas Unit, in Cubatão, both in the state of São Paulo.
Finally, ratings agency Moody's notes a potential sizable lawsuit against Chevron Corporation in Brazil could have a negative impact on the company, but it is too early to judge the full extent of any future liability arising from the lawsuit.
Recent news reports indicate that a federal prosecutor in the state of Rio de Janeiro is seeking BRL20 billion (US$10.78 billion) in damages from Chevron and Transocean Ltd. for the offshore oil leak last month. The Oilholic thinks Transocean’s position is more troublesome given it’s a party to the legal fallout from the Macondo incident.
That’s all for the moment folks – a crude year-ender to follow in early January! In the interim, have a Happy Christmas! Keep reading, keep it ‘crude’!
© Gaurav Sharma 2011. Photo 1: Gaurav Sharma on OPEC's 160th meeting live webcast from Vienna, Austria on Dec 14, 2011 © OPEC Secretariat. Photo 2 & 3: The Oilholic at Baker & McKenzie seminar on investment opportunities for NOCs at the 20th World Petroleum Congress in Doha, Qatar on Dec 7, 2011 © Lizzy Lozano, Baker & McKenzie.
Posted by Gaurav Sharma at 12/21/2011 12:12:00 am