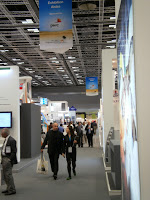 As Day three ends, the Oilholic had the pleasure of great chats with friends at Deloitte, Kentz Engineers & Constructors and Baker & McKenzie here at the 20th WPC. Starting with the latter first – B&M – who have taken the initiative to discuss NOCs and IOCs from a different angle.
While the age old debate about NOCs versus IOCs is history, new opportunities for synergies and investment are emerging between the two and the Chicago-headquartered law firm wants to discuss these over a seminar here at the Congress. Let’s face it, NOCs overtook IOCs ages ago and most IOCs now seek partnerships with NOCs. Furthermore, since now would be a good time for asset acquisition; it is worth talking about the opportunities that exist for NOCs.
The Oilholic has been kindly invited by B&M to moderate the seminar wearing his Infrastructure Journal’s writer as well as this humble blog author’s hat. In sunny Qatar – its two hats better than one. Details on how it all went to follow when the seminar is over.
Since, the hot weather makes one thirsty, a parched Oilholic also had the pleasure of a few dwinkys with friends at Kentz. A chance and pleasant meeting with CEO Dr. Hugh O'Donnell courtesy Reuters’ very own resident oilholic Tom Bergin, author of the splendid book Spills & Spin, was deeply appreciated.
Dr. O'Donnell sees huge regional opportunities here in the Middle East and feels Asia Pacific and Australia would be good bet for investment in the oil & gas sector in this macroclimate for his firm. Sorry the conversation was off record at a social setting so it would not be appropriate to reveal more. 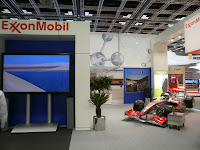 Last but certainly not the least, met several friends (new and old) from Deloitte, including Carl D. Hughes, the advisory firm’s global head of energy and resources. Like Dr. O’Donnell, Hughes sees potential in looking East. The Oilholic and Deloitte colleagues were in agreement about the challenges faced by the refining sector in Western jurisdictions and why new build in India is necessitated by demand.

Shale invariably had to creep in to the discussion – who would have thought that at the 20th Congress the US delegation would be heading here as the world’s leading producer of gas? By the way, got up close to an F1 McLaren car at ExxonMobil's stand! Pretty cool methinks! (See photo above left & click to enlarge). More later; keep reading, keep it ‘crude’!
© Gaurav Sharma 2011. Photo: 20th World Petroleum Congress exhibition floor & entrance © Gaurav Sharma 2011.
Posted by Gaurav Sharma at 12/06/2011 08:53:00 am