Canada, India pitch to world & each other! 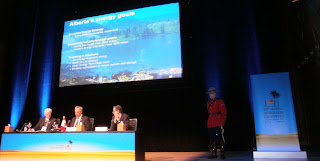 One country aims to be a leading producer (Canada) and one is projected to be a leading consumer or at least among them (India), so the Oilholic has clubbed them together for purposes of blogging about what officials from each country said and did here today at the 20th WPC.

Starting with Canada, its ministerial session complete with a RCMP officer on either side of the stage saw Serge DuPont, Deputy Minister, Natural Resources Canada and Cal Dallas, Alberta’s Minister of Intergovernmental, International and Aboriginal Affairs outline their country’s goals for its energy business with the session being moderated by Neil McCrank, Counsel at Borden Ladner Gervais LLP.
The Canadians maintained that in context of developing and investing in the oil sands – of which there is considerable interest here – the country’s energy strategy would be transparent, accountable and responsible both internally and internationally. They also outlined plans to support their industry, akin to many rival oil & gas exporting jurisdictions, via grants – chiefly the provincial government’s energy innovation fund.
This would, according to Deputy Minister DuPont, accompany developing renewable energy sources and a C$2 billion investment in carbon capture and storage. Canada indeed is open for business with foreign direct investment (FDI) welcomed albeit under strict investment guidelines. Proof is in the pudding – not even one top 10 international oil major worth its balance sheet has chosen to ignore projects in the Alberta oil sands.
The Oilholic is reasonably convinced after hearing the ministerial session, that when it comes to environmental concerns versus developing oil & gas projects who would you rather reason with – an open democracy like Canada or Chavez about Venezuela’s heavy oil? In light of recent events, one simply had to raise the Keystone XL question as the Oilholic did with Canadian Association of Petroleum Producers (CAPP) President Dave Collyer on a visit to Calgary earlier this year. After all, one wonders, what is the Canadian patience threshold when it comes to US exports given that new buyers are in town chiefly China, Korea and India.
“Well Canadians are a patient lot. The US remains a major export market for us. The delays associated with the Keystone XL project are frustrating but our medium term belief is that the construction of the pipeline would be approved,” said session moderator and member of the Canadian delegation Neil McCrank of BLG.
He also believes the new buyers in town can be happily accommodated with the oil sands seeing investments from China, South Korea and India (among others). “We acknowledge that there are difficulties in pulling a pipeline from Alberta via British Columbia to the Pacific coast as well – but we are working to resolve these issues as patiently, pragmatically and ethically as only Canadians can!” McCrank concludes.

There is certain truth in that. Despite being an oil producer, Canada does not have a national oil company (NOCs) to trumpet and shows no inclination to shun FDI in Alberta. One of the aforementioned investors, whether ethical or not, is India which has a ‘mere’ 14 NOCs all aching to explore and secure fresh oil reserves to help meet its burgeoning demand for oil.
Of the 14, some four are in the Fortune 500 and operate in 20 international jurisdictions; the loudest of these is ONGC Videsh Limited (or OVL) which among other countries is also looking at Canada as confirmed by both sides. India’s Minister for Petroleum & Natural Gas S. Jaipal Reddy sounded decidedly upbeat at the WPC, telling the world his country’s NOCs would make for robust project partners.
Over a period of the last 12 months, the Oilholic notes that Indian NOCs have invested in admirably strategic terms but overseas forays have also seen them in Syria and Sudan which is politically unpalatable for some but perhaps ‘fair game’ for India in its quest for security of supply. Canada – should Indian NOCs increase their exposure in Alberta – would be interesting from a geopolitical standpoint given China’s overt stance on being a Canadian partner too.
However, the only open quotes in terms of overseas forays from Indian officials came regarding investment in Russia and FSU republics. A high powered Russo-Indian delegation met on the sidelines of the 20th WPC to discuss possible investment by Indian NOCs in the Sakhalin project. Separately, officials from ONGC and GAIL told the Oilholic they were keen in buying a stake in Kazakhstan’s Kashagan oilfield, which is thought to contain between 9 to 16 billion barrels of oil, and join the consortium under the North Caspian Sea Production Sharing Agreement which sees stakes by seven companies – Eni (16.81%), Shell (16.81%), Total (16.81%), ExxonMobil (16.81%), KazMunayGas (16.81%), ConocoPhillips (8.4%) and Inpex (7.56%).
However the rumoured seller – ConocoPhillips – quashed all rumours and instead said it was actually checking out material prospects in Kazakhstan itself. It also detailed its plans for Canada and shale plays. That’s all for the moment folks. Keep reading, keep it ‘crude’!
© Gaurav Sharma 2011. Photo 1: Canadian Ministerial session at the 20th Petroleum Congress (Seated L to R: Neil McCrank, BLG, Cal Dallas, Alberta Goverment, Serge DuPont, Canada's Deputy Minister, Natural Resources. Photo 2: Indian Ministerial session (Seated third from right: India’s Minister for Petroleum & Natural Gas S. Jaipal Reddy) © Gaurav Sharma 2011.
Posted by Gaurav Sharma at 12/07/2011 03:52:00 pm