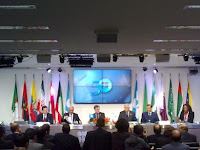 As widely expected, OPEC announced on Thursday that its members have agreed to keep its official oil production target at 24.84 million barrels a day. OPEC president Wilson Pastor-Morris said that the policy in place since December 2008, when it announced a record supply cut of 4.2 million barrels per day, is here to stay.

The cartel will next meet on December 11 in Quito, Ecuador to discuss the issue again. Despite being by pressed by journalists, OPEC Secretary General Abdalla Salem El-Badri insisted that individual members' quotas need not be published. “We know how each country behaves, the market should be happy with total quotas,” he said.

He added, the ever present issue of compliance with quotas, was an important one. By OPEC's own assement compliance was at 61% but a Reuters report puts the figure at 57%. In an interesting development - perhaps the only surprise of the day - OPEC announced that Iran will take over the rotating presidency of OPEC in 2011 for the first time in 36 years. Iranian petroleum minister Masoud Mir-Kazemi assumes the presidency from January 2011; watch this space!