Alongside Thursday’s decision by OPEC to hold its official oil production target at 24.84 million barrels a day, i.e. the level set following a production cut in December 2008; the cartel also noted that global oil demand had dipped in two concurrent years; a situation unseen since the 1980s.

It bemoaned the “rollercoaster” ride in crude prices, particularly between Q4 2007 and Q1 2009. As usual speculators were blamed, with OPEC noting that oil had increasingly emerged as an asset class, with “excessive speculation adding appreciably to market volatility.” 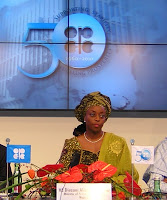 It also appears that the cartel is irked by renewable energy initiatives or at least the talk of renewable energy. OPEC believes that the ambiguity of a number of energy and environmental policies, often with “evidently over-ambitious targets”, particularly in developed regions, has led to uncertainty in regards to future oil demand requirements.

The 158th OPEC conference would be held in Quito, Ecuador on December 11th, where the cartel hopes to publish its Long Term Strategy, as discussed by its 12 member nations here in Vienna on Thursday. Following that, OPEC would meet again in June 2011 in Vienna.

In a surprise move, it was confirmed Iran would assume OPEC presidency in January 2011; it last held the post in 1975. And last but not the least, there is finally a lady at the OPEC table – Nigeria's petroleum minister - Diezani Kogbeni Alison-Madueke, who having been a Shell executive took a certain amount of delight in telling the assembled press scrum that she had been in male dominated industries before and pretty much held her own!

To summarise, OPEC – in line with prevailing sentiment – noted that the market remains well supplied and given the downside risk to the global economy, did not feel the need to raise production.

That’s it from Vienna – time to say Auf Wiedersehen!