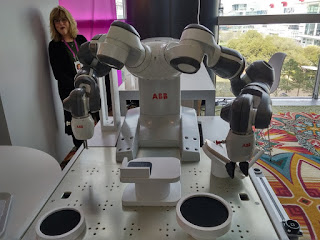 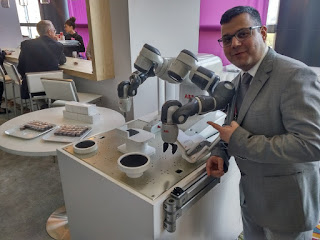 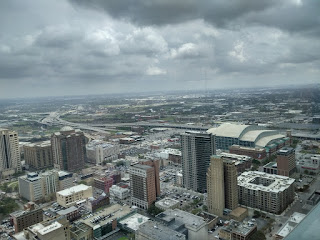 As IHS CERA Week came to a close on Friday, the Oilholic published two Forbes interviews with a 'tech twist', given technology enabled process efficiencies and cost optimisation seem to be in overdrive in the oil and gas industry.

First off, it was a pleasure, yet again, to exchange views with engineering and robotics giant ABB’s boss Ulrich Spiesshofer.

In a wide-ranging interview, Spiesshofer noted: "We are taking the oil and gas industry from an automated into an autonomous operations sphere, where you have self-learning processes, where you use AI to augment human potential, to optimize the control loop for operations and maintenance." (Read the whole interview here.)

"We are working on a proposal where we become a turnkey supplier directly looking at client equipment and alerting them when something goes wrong."

While Emerson is offering full-scale outsourcing, Zornio admitted the industry might not be ready for this level of optimisation. The whole discussion is available here.

With bags packed from CERA Week 2018, this blogger's two standout quotes from the event were uttered by BP CEO Bob Dudley and International Energy Agency's Executive Director Fatih Birol. Dudley reminded the audience of the importance of the integrated model in current climate, when he noted: "Our downstream business contributes billions of dollars to the dividend we give to our shareholders." 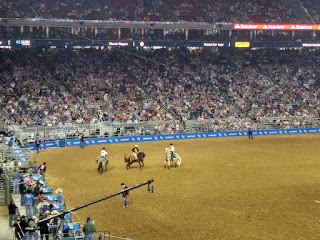 And Dr Birol, when asked what should US producers make of their new found clout in the oil and gas world with forecasts of American production exceeding that of market leaders Saudi Arabia and Russia, quipped: "They should enjoy!"

Finally, on a week-on-week basis, the oil benchmarks ended Friday (9 March) over 1% higher; read what you will into it – but one reckons, price oscillation in the $55-70 per barrel range is about par.

That's all from Houston folks, as it's time for the flight home to London. But before the Oilholic takes your leave, here is a view (above) from Houston Rodeo 2018, which this blogger had the pleasure of visiting yet again.

It's a fantastic affair that draws in thousands every year – with a carnival atmosphere, barbecues, fun rides, livestock on display topping up the rodeo – all with a very unique Texas flavour! Keep reading, keep it ‘crude’! 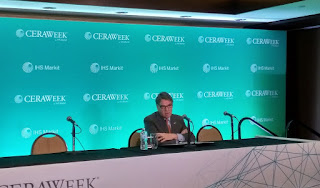 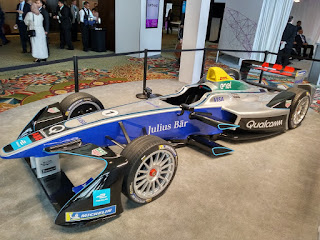 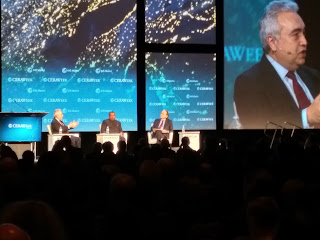 The Oilholic is back in Houston town, for IHS CERA Week, one of the oil and gas industry’s premier event, and so far its all about the tussle between US shale producers and OPEC/non-OPEC ‘supergroup’.

Before the things gained traction on the first day of the week-long event, the International Energy Agency (IEA) emphatically declared the US would dominate oil production over the next five years, and is well on its way to becoming the world’s number one oil producer ahead of Russia and Saudi Arabia. (Here’s the Oilholic’s Forbes report).

The IEA’s inimitable Executive Director Dr Fatih Birol also pointed out that describing the think-tank as an ‘oil consumers’ club’ is becoming clichéd these days as four of its members – the US, Canada, Brazil and Norway, were accounting for much of the world’s oil production growth.

Meanwhile, OPEC Secretary Mohammed Sanusi Barkindo, who is also in town, made it known that the OPEC/non-OPEC production cut underpinned by Saudi Arabia and Russia has been a success, and making a tangible impact in rebalancing the market.

So post-luncheon, both men took to the stage with Daniel Yergin, Vice Chairman of IHS Markit, for  a delightful, somewhat testy but good natured, exchange.

Barkindo declared the OPEC and non-OPEC production cut has been “efficient”, “surpassed expectations” and “brought optimism to the market.”

Birol said that optimism was most apparent in the US, with shale producers, well...producing at a canter, and positioning themselves to cater to robust oil demand from India and China. Providing an undercurrent to his stance, was the news that India was taking it first US natural gas consignment, a mere nine months after inking an agreement to import American crude.

Of course, Birol warned that oil and gas investment was lagging, with 2018 investment valuation projected to rise by only 6% on an annualised basis.

Barkindo declared that was “not in the interest of the global economy.”

Via production cuts, the 24 OPEC and non-OPEC producers were providing “insurance and stability” to the global market; a move that was open to “all producers,” he added.

Of course, US producers driven by the spirit of private enterprise, are not really queuing up to join anytime soon. So what should they do? “Enjoy”, quipped Birol, to peals of laughter in the room.

And so it went, but the Oilholic suspects you get the gist. Elsewhere on day one, Total CEO Patrick Pouyanné said in the crude industry size does matter, and that a lower price environment gives bigger players opportunities to make strategic acquisitions.

“It’s good to be a large integrated oil and gas company. Key to success is stable investment, regardless of oil price,” he added.

Plenty more to come from CERA Week, but that’s all from Houston for the moment folk. Keep reading, keep it ‘crude’!