Late one to early crude commotion at OPEC 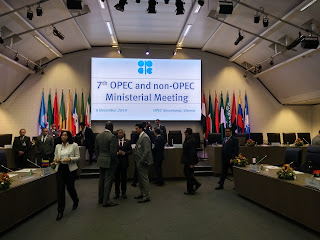 So after having kept analysts and media in the OPEC Secretariat almost till midnight, and then not issuing a final brief, the producers' group has started day two with its planned OPEC and Non-OPEC meeting of ministers.

The figure of a 500,000 barrels per day (bpd) deepening of the cuts remains on the cards, but whether it is a paper adjustment or a real-term cut remains to be seen.

Even before proceedings began, Iranian Oil Minister Bijan Zanganeh left the meeting, with there being little sense in his sticking around given Tehran is exempt from the cuts.

However, he did quip to journalists on his way out that the deal being brokered is indeed a "fresh cut". Inside the meeting hall, Russian Oil Minister Alexander Novak said the OPEC and non-OPEC agreement was working despite doubts expressed by sceptics, and his Saudi counterpart Abdulaziz Bin Salman asked for the "faith and mercy" of analysts and market commentators so that they don't "twist" numbers put out by OPEC+. (Yup, he really did!)

The oil market will have to believe OPEC+, and objective as well as cynical analysts will have to trust them, he added. Felt more like a sermon, and less like a statement, but hey - whatever works. More drama from here later in the day. But that's all for the moment folks! Keep reading, keep it 'crude'!

Beyond a crude April Fool’s joke 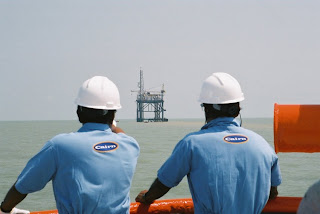 There’s still just too much oil around, with physical traders reporting anything between 1.75 to 2.5 million barrels per day (bpd) of excess supply on the market.

Only thing that’s changed is that anecdotes of a 3 million bpd surplus have declined, particularly so in Asia. That is a positive of sorts, but unless excess supply falls to around the 1 million bpd level – geopolitical risk premium won’t kick in like it used to before the glut took hold.

In the backdrop of course, is a Saudi-Iranian spat on the level of each others oil exports that’s extending well beyond a crude April Fool’s day joke. On Thursday, Saudi Deputy Crown Prince Mohammed bin Salman told Bloomberg: “If all countries agree to freeze production, we will be among them.”

He added that Iran needed to be among those countries “without a doubt.” The comments come as Iran has decided not to attend oil producers' talks in Doha on April 17. Tehran has called the idea of such a meeting daft.

In response to the Saudi comments, Iranian oil minister Bijan Zanganeh told the Mehr News agency that the Islamic republic would “continue increasing its oil production” and exports. Meanwhile, a Reuters survey published last week indicated that OPEC’s oil production rose in March, after a period of stability in February, following higher production from Iran and near-record exports from southern Iraq.

Its 4 million bpd-plus output was second only to Saudi Arabia among all of OPEC's 13 member nations. Lest we forget, Russian output remains at Soviet era highs of 10.91 million bpd.

Simple truth of the matter is, the Iranians cannot flood the market and are highly unlikely to match their rhetoric of 1 million bpd, not least because they lack the infrastructure and means to do so in a short period of time, and were they to do so, the resulting price dip would come straight back to haunt them.

The Russians have already said they'll look for “alternative means” to curb a production rise, but not by cancelling new exploration. In any case, they lack the means to ramp up output further. As for the Saudis, who still have spare capacity and are willing to freeze were others to do so, it is purely a case of meeting client demands.

As the Oilholic has noted before, they are producing to a level that meets existing export demand for their longstanding clients. As such, they have no need to ramp up the output levels. So phoney chatter of “will they, won’t they” is purely for market consumption and has little connection with reality when it comes to net volume additions or declines, something which would be dictated by market economics!

As for what this blogger expects would come out of Doha – probably an agreement big on public relations spin than a real-terms cut. For argument sake, even if there is a cut of 1 million bpd, the reprieve would be temporary. Futures would rise over the short-term before the reality of tepid demand and considerable oil held in storage triggers another round of correction. Get used to the $40-50 per barrel range. That’s all for the moment folks, keep reading, keep it crude!

OPEC's politics is the main show, not the quota 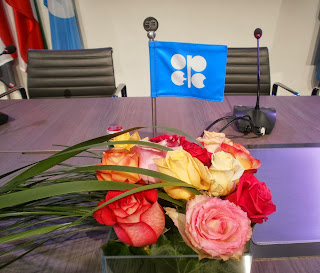 The Oilholic finds himself in a decidedly chilly Vienna ahead of the 164th meeting of OPEC ministers. This blogger's correspondence on all crude matters from the lovely capital of Austria goes back a good few years and to the old OPEC HQ.

However, in all these years of journeying here from London, there has been one constant - nearly every leading financial newspaper one could pick up at Heathrow Airport carried a report about expectations from the ministers' meeting ahead of the actual event taking place. Yet this morning, most either didn't flag up the meeting or had a perfunctory brief on it. The FT not only omitted a report, but with eerie symmetry had a special report on the future of NAFTA containing an article on shale transforming North American fortunes!

There is clear sense of anti-climax here as far as the decision on the production quota goes. Analysts think OPEC will hold its quota at 30 million barrels per day (bpd), traders think so too, as do "informed sources", "sources close to sources", "sources of sources", etc, etc. Making it even more official, Algerian oil minister Youcef Yousfi has quite candidly told more than one scribe here today that quota fiddling was unlikely.

So why are we all here? Why for the sideshow of course! Silly you, for thinking it was anything but! Only thing is, cometh the meeting tomorrow - it's going to be one hell of a sideshow. Weaved into it is the Oilholic's own agenda of probing the hypothesis of the incremental barrel a bit further.

For not only are additional barrels available globally owing to a decline in US imports courtesy shale, Iraq - which hasn't had an OPEC quota since 1998 - is seeing a massive uptick in production. Additionally Iran, apart from being miffed with Iraq for pumping so much of the crude stuff, could itself be welcomed back to market meaningfully over the coming months, adding its barrels to that 'crude' global pool.

While that is likely to take another six months at the very least - the Iraqis are pumping on regardless. You wouldn't expect anything else, but it has made Iran's new oil minister Bijan Zanganeh come up with the crude quote of the month (ok, last month) when he noted: “Iraq has replaced Iran's oil with its own. This is not friendly at all." Yup, tsk, tsk not nice and so it goes with the Saudis, who pumped in overdrive mode when the Iranians were first hit by sanctions in 2012.

To put things into context, without even going on a tangent about Shia-Sunni Muslim politics in the Middle East, Iraqi production has risen to 3 million bpd on the back of increasing inward investment. On the other hand, Iran has seen stunted investment following US and EU sanctions with production falling from 3.7 million bpd to 2.7 million bpd as the move hit it hard in 2012. Even if the Iranians go into overdrive, reliable sources suggest they'd be hard pressed to cap 3.5 million bpd over the next 12 months.

As for the Saudis, they have always been in a different league vying with Russia (and now the US) for the merit badge of being the world's largest producer of the crude stuff. Meanwhile, the price of Brent stays at three figures around US$111-plus - not a problem for the doves such as Saudi Arabia, but not high enough for the hawks such as Venezuela.

The Oilholic seriously doubts if political problems will be ironed out at this meeting. But what's crucial here is that it could mark a start. Can OPEC unite to effectively manage the issue of both its and the global pool's incremental barrels in wake of shale and all that? Appointing a new secretary general to replace Libya's Abdalla Salem el-Badri would be a start.

El-Badri is long due to step down but has carried on as the Iranians and Saudis have tussled over whose preferred candidate should be his successor. The quota decision is not the main talking point here, this OPEC sideshow most certainly is, especially for supply-side analysts and students of geopolitics. That's all from OPEC HQ for the moment folks, more from Vienna later! Keep reading, keep it ‘crude’!