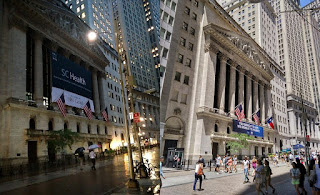 The Oilholic has just about rounded up a near week-long power markets trip to New York, including a visit to understand the energy supply dynamic of the City’s landmark Rockefeller Center courtesy of industry colleagues at ABB, and a weekend of Formula E racing.

But when in New York City old habits die hard, and this blogger rarely misses opportunities to discuss the oil market direction with fellow analysts and crude traders. The latest visit was no exception. Even New York's weather of the past week chimed with what we've seen in the crude market. On Thursday (July 11) the Oilholic arrived to a rain drenched Wall Street (above left) full of soggy bears with both oil benchmarks on the rise and WTI futures even touching $60 per barrel at one point (Brent - $66.52/bbl & WTI $60.20/bbl).

Yet by the time yours truly packed it in a week later, New York and its Wall Street oil market bears were again basking in the sunshine (Brent at $61.93/bbl & WTI $55.30/bbl) even if Iran's grab of a UK-flagged Swedish-owned oil tanker Stena Impero in the Strait of Hormuz added another dollar or two per barrel. And for all the kerfuffle, the inescapable truth is that both benchmarks have stayed range-bound.

The Oilholic has assigned the reasons as - the abundance of US light crude (especially copious amounts being exported to Asia), deep concerns over global demand (and a possible negative quarter if not a full blown recession for the US economy on the horizon), and supply dynamic largely outweighing OPEC cuts over the near-term.

One has also said it on record that if the oil market bears are to be tamed, the key bullish factor on the horizon is not the Iranian shenanigans in the Persian Gulf (short of an unlikely all out war), but the easing of US-China trade tensions.

Putting these thoughts to a select group of Wall Street analysts this blogger has known for over 10 years, came up with unsurprisingly similar conclusions. Ok, discussing market direction with a beer in the Fraunces Tavern in the company of seven industry acquaintances is hardly a scientific poll, and more of an indicative opinion – but whichever way you look at it, few put forward an obvious bullish breakout factor that would pull the oil price from its current range. 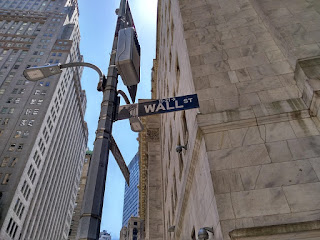 Many see a $70 level as a near-term possibility for Brent, as does the Oilholic, but few reckon the level would be meaningfully capped given clouds on the 2020 horizon.

More so, many agree that OPEC’s market credibility is now tied to how much and how far the Russians go along with its – or should we their own – agenda, as the Oilholic recently wrote for Rigzone.

Away from the near-term, most expect the US production to provide a meaningful buffer for a minimum of five years. In that time, the supply-demand dynamic is bound to face profound changes and resulting scenarios could be materially different from where we currently are. To sum it up, the Oilholic has a $65-70 per barrel 2019 average price for Brent, and $55-60 per barrel for WTI; with both leaning towards the lower end of the range, bar a full-blown conflict in the Persian Gulf.

As one wrote for Forbes, right after OPEC’s twice-delayed oil ministers’ summit; 2020 could get even more bearish. Many known contacts on Wall Street share that opinion, and the time they spared at such short notice this week is truly appreciated. And on that note, its time to say goodbye to NY Keep reading, keep it ‘crude’!