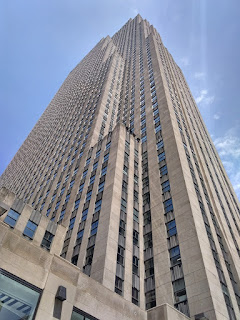 The Oilholic finds himself back in New York, US for the finale of the ABB Formula E 2019 season. But before watching the FIA-backed electric-mobility powered thrill ride, this blogger paid a visit to the Big Apple's iconic 30 Rockefeller Plaza building known to most locals as 30 Rock, rather than its relatively new christening as the Comcast Building.

Most visitors head to the "Top of the Rock", i.e. the building's observation deck to soak in views of the City's amazing urban sprawl and spectacular skyline. But unlike most, yours truly headed to the bottom to get a glimpse of a fascinating endeavour in energy efficiency.

You won't need to be an engineer to work out that the 30 Rock, and by extension the wider Rockefeller Center – a large complex of 19 buildings covering 22 acres between 48th and 51st Streets – consume copious amounts of power, more so in the summer months with air conditioning on full blast. For a city that consumes close to 11,000MW to 15,000 MW of power per day, keeping things in check is a matter of priority starting right with its Skyscrapers.

It is with this objective that the good folks at 30 Rock set about it using ice! The concept is simple yet brilliant in equal measure – a solution to the summer's searing heat by freezing water at night (when power is cheaper, produced efficiently and loads are lighter) and then using it to cool the building as it melts the next day during peak load periods. 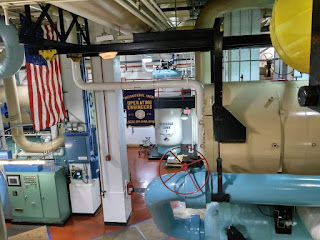 Much of that infrastructure is housed below 30 Rock glanced at by the Oilholic, courtesy of ABB, with the electrification and robotics giant inheriting a legacy service and maintenance contract for 30 Rock from General Electric, following the Swiss company's takeover of its American counterpart's industrial solutions unit GEIS in 2018.

Dubbed "IceBank(s)" by their manufacturer Calmac, the ice freezing and melting units now form the centrepiece of innovation at the heart of 30 Rock's legacy power systems dating back to the 1930s. According to ABB's Senior Manager in-charge of the contract James Payne, the system's thermal energy storage premise lessens stress on the power infrastructure since consumption during the critical peak hours (which for 30 Rock would be between 11-1pm and 4pm-5pm), and shifts the demand dynamic to the night-time.

Away from prying eyes, legacy systems intertwined with state-of-the-art digital systems and a maze of pipes, pumps, tanks, wires and fuses get to work day in / day out for a building that has some pretty demanding tenants – not least broadcaster NBC. 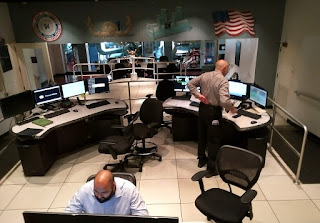 The ICE system has seen constant improvements since 2012 has proved itself to be pretty reliable. As for the sheer numbers, according to a spokesperson, the Rockefeller Center as a whole is served from its 30 Rock hub by a central chilled water plant containing 14,500 tonnes of steam and electric driven chillers.

The water is distributed around the entire building campus through a "main water loop" which travels around the perimeter of the site. Six primary pumps are located in the main plant, four having 6,000 GPM capacity at 125hp and two having 2,000 GPM capacity at 50hp.  Each individual building has pumps which then draw off of the primary loop and send the main plant's chilled water to heat exchangers located within each building. 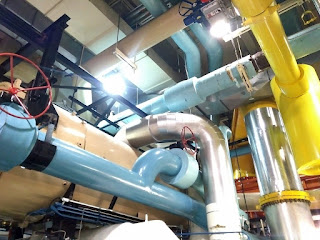 If all that sounds a bit heavy, then simply consider this – power costs have come down by as much as 30% on annualised basis using such thermal storage techniques. The concept is not new and has been around for nearly 15 years, but New York is getting seriously serious about it these days.

Beyond the Rockefeller Center, Goldman Sachs, Morgan Stanley and Bank of America towers have all gone down the thermal storage route, with rising take-up in the last five years. ABB, which has been growing its footprint in New York state, says advanced digitisation can work alongside legacy power systems to create an efficient, serviceable power ecosystem incorporating thermal storage, as more and more buildings opt for sustainable solutions and work towards lowering their carbon footprint.

ABB's viewpoint is shared by real estate firm Tishman Speyer, ventilating and cooling systems maker Trane and of course IceBank manufacturer Calmac – all of whom are drivers of thermal storage adoption at 30 Rock. Let's see where the market goes, but the next five years should be interesting. That's all from 30 Rock folks, its time for the Formula E racetrack now!