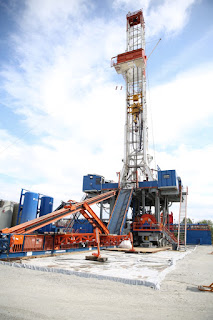 The Oilholic has bid farewell to the Big Apple, and finds himself visiting a shale gas drilling site in Switzerland Township, Eastern Ohio, via Pittsburgh, where there is something rather unique going on from a European perspective.

It seems Ineos, the very Alpine and European Switzerland-headquartered petrochemicals firm, and Consol Energy (which owns several Marcellus hale drilling sites), have come together to dispatch shale gas from the US of A to the old continent.

Given serial British industrialist and founder of Ineos Jim Ratcliffe is involved in the enterprise – there are no half measures.

The company has commissioned eight-dragon class ships, with an investment of $2bn (£1.54bn) towards shipping more than 800,000 tonnes a year of ethane from Pennsylvania to Grangemouth (UK) and Rafnes (Norway).

Each of the ships is capable of carrying over 27,500 cubic meters of gas sourced from the Marcellus shale. Norway has already received its first consignment with the UK tipped to receive its first one on September 27th.

Ratcliffe’s petrochemicals business needs steady, reliable feedstock and exporters such as Consol, need buyers offering better proceeds than currently on offer stateside. So natural gas from Ohio and Pennsylvania is finding its way via a physical pipeline to Marcus Hook Terminal in Philadelphia, from where it gets dispatched via a virtual pipeline of these eight ships constantly moving the gas to Europe, providing Ineos with gas for the foreseeable future. 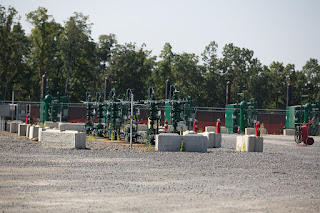 While implications for Europe are huge, what it means for US exporters is no less significant. Take Consol itself, a company moving away from its coal mining heritage dating back over 150 years, to natural gas exploration and production.

It has one of the largest acreage in the Appalachian, and is slowly divesting coal assets, delving deeper into gas exploration. In more ways than one, Pennsylvania itself appears to be going through an economic renaissance along with much of the Rustbelt courtesy of shale gas exploration.

Moving on from Eastern Ohio, and before hopping on the flight back home, the good folks at Consol took also yours truly to an onstream shale gas extraction facility actually on Pittsburgh airport land (see above right). Process refinements, extraction techniques and automation needed to drill such wells is also moving up in leaps and bounds. Compared to the Oilholic’s last visit to a shale gas extraction facility in 2013, drilling times have halved.

As for the controversy that almost inevitably accompanies fracking, Tim Dugan, chief operating officer of Consol, says a well planned and thought out fracking process “does not cause earthquakes” with bulk of what's in the fracking fluid being water and rest of the materials fully revealed. 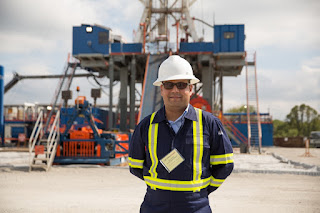 Dugan also says seismic studies have improved in step with the shale gas industry, helping drillers avoid faultlines that could potentially cause tremors.

Ineos is hoping to relay Dugan’s message, and the economic transformation shale has brought to the rustbelt, back to the UK.

Not only is Ineos instrumental in exporting US shale gas, it also holds 30 shale exploration licences in UK that it hopes will one day revive the British oil and gas industry. There's much promise, but its early days yet. That’s all from the USA for the moment folks, its been a memorable visit to another shale extraction site; one's first outside of Texas.

However, just before one takes your leave, a special shout out to Mike Fritz of Consol Energy, who accompanied this blogger over two days with various stopovers from Eastern Ohio to Pennsylvania, enduring traffic jams, pesky questions, site visits and information requests – all of which were met with a friendly smile. Keep reading, keep it crude! Next stop London Heathrow.