Trouble at the South Korean mill 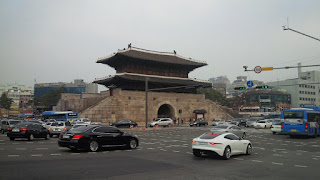 The Oilholic finds himself 5,506 miles east of London in Seoul, South Korea, on the first leg of a round the world trek, alongside a fact finding mission for an upcoming Forbes article.

In tandem with this blogger’s arrival in South Korea, was that of the USS John C. Stennis, the US Navy’s nuclear-powered aircraft carrier as tensions in the Korean Peninsula run high. With neighbouring North Korea’s leader Kim Jong-Un (once again!) promising nuclear armageddon, Seoul and Washington are in the midst of their annual ongoing joint Key Resolve and Foal Eagle exercises to instil regional confidence.

To be perfectly honest, South Koreans have seen it all before – their Northern neighbour’s shenanigans are hardly the stuff that is keeping the intelligentsia occupied or the subject of much chatter in cafés and bars dotted across the capital. The primary concern remains whether recent economic stimulus measures are cutting through or not.

The economic health of South Korea also matters to oil and gas analysts like yours truly, as the country is among the biggest global importers of the crude stuff, relying on the importation of 97% its fuel needs having negligible domestic hydrocarbon resources. Crude oil consumption is currently around 2.5 million barrels per day, almost all of which is imported, making South Korea the fifth largest oil importer in the world.

In wake of the MERS virus outbreak in South Korea last year and increasingly lacklustre consumer confidence, the government unveiled a $20 billion economic stimulus package in July 2015. Among the most eye-catching measures was the introduction of tax cuts on automobiles – the very domestically engineered sort yours truly saw whizzing across Seoul, and ones that happen to be household brands across the world.

However, while the MERS virus might be a thing of the past, the country's economic malaise persists worrying the Bank of Korea and the government alike. Exports contracted 18.5% in January, while the economy grew 2.6% in 2015. It prompted the central bank to revise South Korea’s growth forecast for the current year down to 3.0% from 3.2%.

Nonetheless, petrochemical and refining exports are proceeding at pace, given that three of the 10 largest refining facilities in world happen to be in South Korea. And crude oil imports are – so far – holding firm at current averages of 2.3 to 2.5 million bpd. However, one questions whether the said levels can indeed be maintained.

That’s despite a further $5 billion in stimulus measures announced by the government in February, including the extension of automobile tax cuts. There’s definitely trouble at the South Korean mill! That’s all from Seoul folks as the Oilholic leaves you with a view of traffic zipping past the city’s Dongdaemun Gate. This blogger’s next stop is Taipei; more from there shortly. Keep reading, keep it ‘crude’!