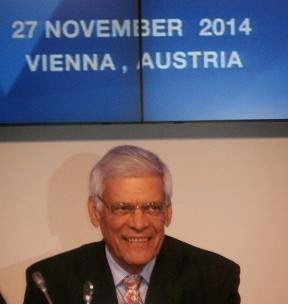 Some wanted a production quota cut; others didn’t and in the end it all bottled down to what the Saudis wanted – a rollover of the level set at 30 million barrels per day (bpd) since December 2011. So as the 166th meeting of OPEC ministers ended, Al-Naimi departed Helferstorferstrasse 17 - OPEC's HQ in Vienna, Austria having got his wish.

Had a cut been enforced and the Saudis not respected the agreement, it would have been meaningless. So the announcement did not come as much of surprise to many analysts, yours truly including.

For a spot report, you are welcome to read the Oilholic’s take on Forbes and the ‘longstanding’ Secretary General Abdalla Salem El-Badri’s jovial press conference explaining why the cartel acted as it did in the interests of “market equilibrium and global wellbeing”.

Rather calmly, OPEC has also suggested it would hold its next meeting in June as normal and extended El-Badri’s term until December 2015. But the Oilholic suspects a US$60 per barrel floor would be tested sooner than most expect. Will an extraordinary meeting be called then? Will OPEC let things be until it meets again June? What about Venezuela, Iran and Nigeria who will leave Vienna thoroughly dissatisfied?

It is indeed credible to assume that OPEC will grin and bear the oil price decline in the interest of holding on to its 30% share of the global crude markets for the moment. But for how long as not all are in agreement of the decision taken today?

Barely minutes after El-Badri stopped speaking, Brent shed a dollar. Within the hour it was trading below $73 a barrel while the WTI slid below $70. We’re now formally in the territory where it becomes a game of nerves. For the moment, none of the major oil producing nations, both within and outside OPEC, are willing to cut production even when demand for oil isn’t that great.

Should bearish trends continue, will someone blink first? Will finances dictate a production decline for someone? Will some or more of the producers come together and take coordinated action with OPEC?
These are the million barrel questions!

The latter option was attempted in Vienna bringing the Russians and Mexicans to the table, but the Saudis ensured it didn't succeed. The next four months ought to be interesting. On that note, it's good night from OPEC HQ. Analysis and a post mortem to follow over the coming days, but that’s all for the moment folks! Keep reading, keep it ‘crude’!