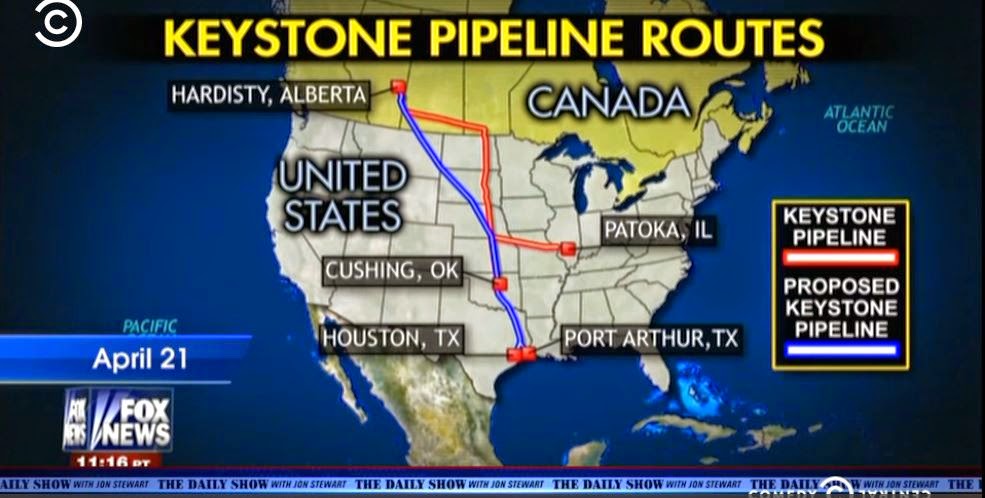 Despite much being afoot in the crude oil world, there’s only one place to start and that’s the ongoing farce over the Keystone XL pipeline extension project. A continuation of US President Barack Obama’s dithering over approval of the transnational pipeline extension (from Alberta, Canada to Texas) is not a major surprise. However, an unassailable truth flagged up by none other than comedian and political satirist Jon Stewart certainly is!

It seems many controversial decisions, including Keystone XL’s approval, were delayed by the Obama administration until after the US mid-term elections undoubtedly to calm worried Democrats (who were in for, and eventually did get, an electoral pasting) so that they didn’t have to take a political stand on these issues one way or another. So when Obama delayed approval of Keystone XL (again!) in April this year, that helped the President’s mates both for and against the project. 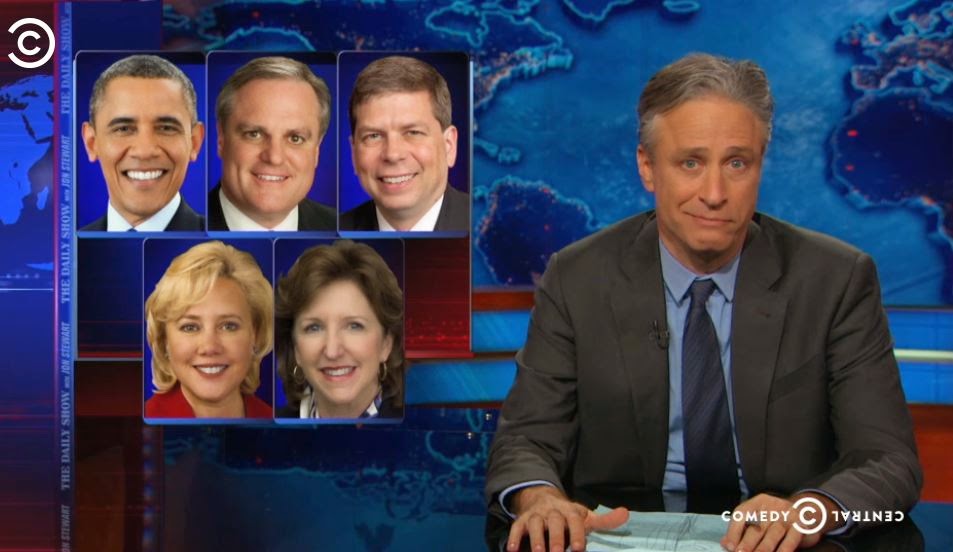 Especially, senators Mary Landreiu (D-Louisiana), Mark Begich (D-Alaska), Mark Pryor (D-Arkansas) and Kay Hagan (D-North Carolina) all in red states favouring the project, who then used the delay as a pretext to criticise and "distance themselves" from the president.

Conversely, blue states Democrats thought they got points for criticising the pipeline extension project to pander to opposing sentiments of their respective electorates. It was supposed to be a win-win situation; except for one thing - they all LOST and Landreiu, who is facing a tough run-off is going to, chuckled Stewart on The Daily Show broadcast for November 6 evening.

This week, the "old" senate rejected approval of Keystone XL, one of its last acts before the new Republican controlled senate convenes. At which point, the "new" senate will approve it and then one assumes the President would veto it. Then Democrat presidential candidate(s), including one Hillary Clinton who is said to be in favour of the pipeline, will take their respective positions either denouncing or praising the decision and so it goes. 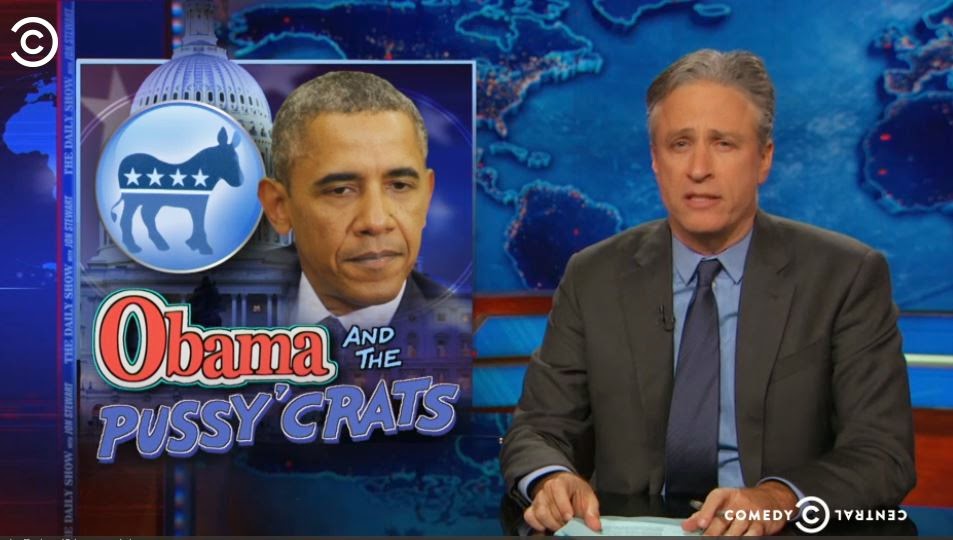 According to the splendid Stewart, it’s a popular tactic known as the “Chickensh*t gambit”. (To view the clip in the US click here, for the UK, click here, for elsewhere not quite sure where!)

Both those for and against the project should despair over the state of affairs. However, on the bright side they’ll be plenty of material for Stewart to bring a bit of laughter into our lives. As for the Canadian side, they are a patient bunch and among their ranks are some who quietly (and somewhat correctly) believe their country's need for the pipeline is diminishing as China's footprint on the global crude oil market grows ever bigger than that of the US.

Meanwhile, by sheer coincidence barely days after the Oilholic went on Tip TV to discuss the challenging climate for oilfield services (OFS) companies (including why the Kentz takeover in August by SNC-Lavalin would not have happened now at the price it did back then), came the mother of all moves – Halliburton’s for Baker Hughes.

In case you’ve been on another planet and haven’t heard, Halliburton has agreed to buy rival Baker Hughes in a cash and shares deal worth US$34.6 billion. The transaction has been approved by both companies' boards of directors and is expected to close in late 2015, pending regulatory approval. As the oil price has fallen by a third since the summer, demand for OFS has cooled and a coming together of the second and third placed services providers makes sense in a cyclical industry.

Nonetheless, the announcement and speed of agreement took many by surprise. Dave Lesar, CEO of Halliburton, told CNBC's Squawk on the Street program on Tuesday that Baker Hughes brings complimentary product lines to the merger which his company does not have.

“Production chemicals is one, artificial lift is another, so from that standpoint they [Baker Hughes] do have some technology that we do not have. Plus they have some fantastic people in their talented organisation. Combine that with out talent and I think we’re putting together the industry bellwether.”

“Both companies are growing. We’re going to hire 21,000 people just at Halliburton this year, not only blue collar but white collar and professionals. You add that to capability and the growth we’re seeing out at Baker…I think it expands career opportunities.”

Lesar also said he had a top notch team in place to address anti-trust concerns which might involve divestments of up to $7.5 billion. The Halliburton CEO added that the response from big ticket clients, including several National Oil Companies (NOCs), had been great. “Feedback from almost of our customers, including NOCs has been pretty positive, where a stronger, more developed organisation can help them in ways neither Baker nor Halliburton could have done standing on our own.”

“Furthermore, we would not have done this deal if I did not believe that we could get this through the regulatory bodies,” Lesar said. There you have it, and it’d cost $3.5 billion in payments to Baker if he is wrong and regulators block the deal. 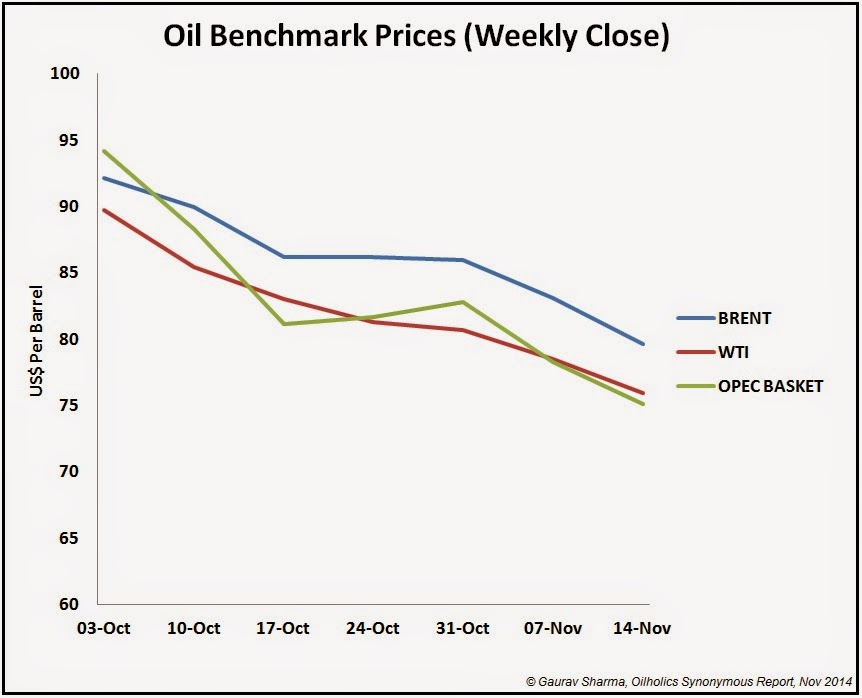 The Halliburton CEO largely sidestepped commenting on the Keystone XL farce and the oil price tumble, except adding on the latter point that: “We’re not in the bunker yet!” As OPEC meets on November 27, the market is in a sort of “pause still” mode. Brent is lurking just below $80 level, while the WTI is around the $75 level (see right, click to enlarge).

The Oilholic’s gut instinct, as one told Tip TV, is that OPEC has left it too late to act and should have made a call one way or another via an extraordinary meeting when the Brent fell below $85. So if they cut now, will it have the desired impact?

Meanwhile, Producers for American Crude Oil Exports (PACE), says repealing the ban on US crude oil exports will not only create hundreds of thousands of jobs and grow the economy, it will benefit consumers by “lowering gasoline prices” contrary to opinion expressed in certain quarters. That conclusion, it says, is supported by no less than seven independent economic studies. These include the Brookings Institution, IHS Energy, Dallas Federal Reserve Bank, and the US Government Accountability Office, among others.

Finally, Fitch Ratings says the 25% drop in the oil price since July is likely to lift economic growth prospects, improve terms of trade, and have a potentially positive credit impact for a number of Asian economies if the lower prices are sustained below $90 level through 2015.

Most major Asian economies - including China, Japan, Korea and Thailand - would see an effective overall income boost from sustained lower oil prices, the agency said. In addition, countries with large oil import needs facing external adjustment pressures such as Indonesia and India are among the best positioned to see a positive impact on sovereign credit profiles, although the broader policy response will matter too, it added. That’s all for the moment folks! Keep reading, keep it ‘crude’!