The Oilholic spent last Friday evening downing a few drinks with a 'civil servant' of the diplomatic variety who'd returned back from the recently concluded Nuclear Security Summit in The Hague, where the Ukrainian standoff dominated most conversations. But before you get excited, yours truly has no 'Jack Bauer'-level clearance gossip!

However, with 53 nations represented – there were quite a few suits around, and contrary to popular belief, the stiff suits do gossip! Credible intel does appear to suggest that some Europeans did a very fine 'Clinton post-Lewinsky scandal' impression in a geopolitically fresh context which kinda ran like: "We do not have relations with that man Putin." Of course, they were, as Clinton was back in the day, being a little less frugal with the truth. 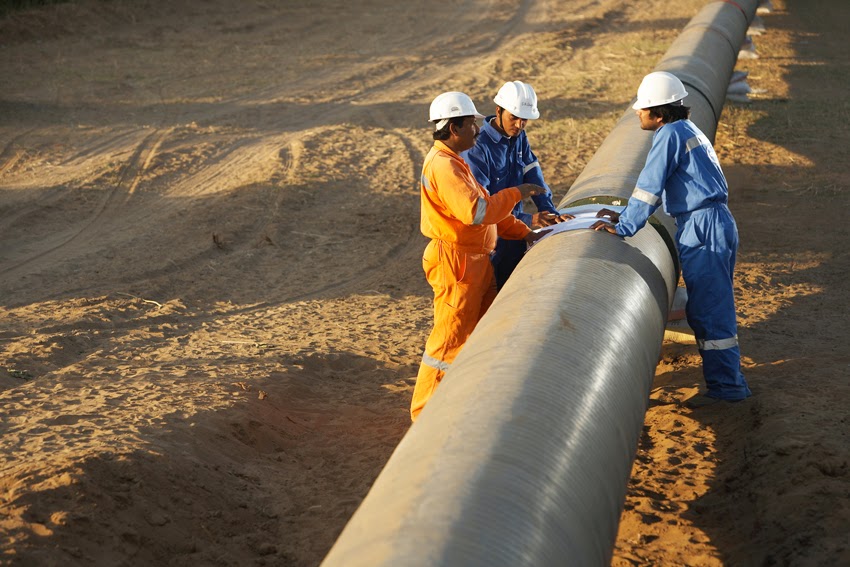 The Americans already knew that but didn't say so out of diplomatic courtesy, at least not in public. The Oilholic wouldn't have been so courteous, but then yours truly isn't in the diplomatic service. From the Baltics to the Balkans, Russian exports of natural gas dominate the energy spectrum built on hitherto seemingly inextricable relations, whether amicable or not.

Despite promising to diversify their supplies when the Georgian skirmish happened in 2008, not much has changed, as The Oilholic noted earlier this month. As a direct consequence, US sanctions against Russia appear to better structured compared to European ones which look like a rag-bag of measures to accommodate everyone and annoy no one – especially President Putin, who doesn't really care about them in the first place! Most pressing question is – what now for the EU energy equation?

Just as the suits were winding up, Jaroslav Neverovič, Lithuania's energy minister made an impassioned plea to the US to export more gas to Europe as a possible answer. Just as a sub-context, the Baltic States are busy building LNG import terminals. Headline grabbing it may well have been, what Neverovič said, even if realised, would do little to curb European addiction to Russian gas over the medium term.

Supply-side diversity cannot be achieved in an instant, nor can the US solve the problem. If the capacity of all seven US FERC and DOE approved LNG export terminals (so far) is totalled and it is hypothetically (or rather absurdly) assumed that the entire cargo would be dispatched to Europe – the volume would still only replace around 35% of the current level of Russian gas imports to Europe.

But what has changed is that the Baltic nations, as demonstrated by Neverovič, are clearly alarmed; perhaps, more than they were in 2008. The Poles are mighty miffed too and even the Germans are waking up and smelling the coffee. So what's next? American LNG imports will come, while Norway, UK and the Netherlands’ pooled resources could help the trio.

However, going beyond that, and to quote a brilliant editorial in The Economist, would mean Europeans relying on Algeria, Qatar, Azerbaijan and Kazakhstan which does not seem very savoury. "But the more rogues who sell them gas, the harder it is for any one to hold Europe hostage," it adds! So here's your 'least worst' medium term scenario, preparation for which had to start in 2008 and not in 2014!

Related to the situation, Fitch Ratings revised the corporate outlooks of nine Russian companies, including those of Gazprom and Lukoil to Negative. As with a situation of this nature there would be losers somewhere and winners elsewhere.

According to the ratings agency, BG, BP, Shell and Total would be among its EMEA rated oil & gas companies that stand to gain from a "potential shift" in EU countries' energy links with Russia over time. On the other hand, Gazprom and Ukraine's Naftogaz – no prizes for guessing – are most likely to find themselves at a competitive disadvantage.

Analysing a scenario where EU countries could be forced to "recast their approach to energy and economic links with Russia over time", as UK Foreign Secretary William Hague has suggested, Fitch said BG, BP,  Shell and Total are well placed.

For instance, BG is participating in three US projects already approved by FERC and DOE to export LNG. BP completed the final investment decision for the Stage 2 development of the Shah Deniz gas field with its local partner State Oil Company of Azerbaijan in December last year. The expansion of the southern corridor gas link to Europe puts these companies in a unique position to diversify EU gas supplies.

Meanwhile, Shell is the first company in the world to develop floating LNG (FLNG) facilities. The technology is an important development for the industry as it reduces both project costs and environmental impact. If Shell is able to replicate the FLNG model it is deploying in Australia to diversify European supplies, it could give the company a competitive advantage over peers.

Finally, Total became the first Western oil major to invest in UK shale prospection after agreeing to take a 40% stake in two licenses that are part of the prospective Bowland Shale in Northern England. The investment could give the company a head start if European shale gas production begins to ramp up in a meaningful way, even though its early days. In fact, its early days in all four cases, and Fitch agreed that supply-side benefits would accrue over time, not overnight.

Going the other way, Gazprom, which supplied around a third of European gas volumes in 2013, faces the prospect of diminishing market share if the EU seeks alternative gas supplies, instead of simply alternative gas routes from Russia around Ukraine. "Europe may finally find the political will to reduce this percentage," Fitch adds.

As for Naftogaz – it's in big trouble alright. Not only could the Ukrainian company face higher prices for gas supplies from Russia accompanied by reduced volumes for internal consumption, the road ahead is anything but certain!

Away from the EU and Ukraine, UK Chancellor of the Exchequer George Osborne dropped a few crude morsels in his annual budget on March 19 to help British consumers and the industry. Fuel duty was frozen again, while passengers on some long-haul flights originating in the UK are set to pay less tax following a revamp of Air Passenger Duty (APD).

Passengers travelling more than 2,000 miles will pay the band B rate, which varies from £67 to £268, Osborne told parliament. The two highest of the four APD tax bands are to be scrapped from 2015, he added. At present, it is cheaper to fly from the UK to the US than the Caribbean, despite often similar distances, a situation Osborne described as "crazy and unjust". So passengers on long-haul flights to destinations such as India and the Caribbean can expect to pay a lower tax rate soon.

Coming on to industry measures, Osborne also put forward a new incentive for onshore prospection, wherein a portion of profit equal to 75% of a company's qualifying onshore capital expenditure will be exempt from supplementary tax charge.

This portion of the profit will then be subject to tax at 30%, while the remaining profit will be subject to a marginal tax rate of 62%, as is usually the case with oil & gas companies operating in the UK. The bold and much needed move went down well in the currently charged geopolitical atmosphere, unless you happen to be opposed to fracking on principle.

Robert Hodges, director of energy tax services at Ernst & Young, said it was welcome news for the shale gas industry which needs to commit significant investment to prove commercial reserves in the UK.

"The Government also announced it will work with industry to ensure that the UK has the right skills and supply chain in place. This is an important commitment, which will be welcomed by industry, to ensure that the UK maximises the benefit from the development of its indigenous oil and gas resources," he added.

As for the North Sea, we saw some moves on ultra high pressure, high temperature (HPHT) fields with Osborne providing an allowance to exempt a portion of a drilling company's profits from the supplementary charge. The amount of profit exempt will equal at least 62.5% of qualifying capex a company incurs on these projects. The Chancellor also said he would launch a review of the tax regime for the entire sector.

Some were pleased, others not so. Maersk Oil and BG, lead operators of the Culzean and Jackdaw fields, are the first to benefit. Both were cock-a-hoop saying it would lead to the direct creation over 700 jobs, with a potential for up to 8,000 more further down the supply chain. However, the International Association of Drilling Contractors (IADC) claims changes over drilling rigs and accommodation vessels would cost firms an estimated £145 million in the coming year. Lobby group Oil & Gas UK also expressed concerns on cost escalation, but welcomed other bits thrown up by Osborne.

Away from it all, there's one tiny non-UK morsel to toss up. According to a recent GlobalData report, it appears that Kenya's first oil & gas licensing round is not expected Q4 2014 at the earliest. The first licensing round was originally scheduled for June last year with an offer of eight blocks up for bidding. Then all went a bit quiet. Now GlobalData says it will happen, but plans have temporarily stalled pending the passage of a new energy bill.

Moving on to the price of the crude stuff, last fortnight was pretty much a case of steady as she goes for Brent, while supply-side issues caused a mini spike with the WTI. And, that can only mean one thing - another narrowing of the Brent-WTI spread to single figures.

Factors in the WTI rear-view mirror included supply shrinkage at Cushing, Oklahoma; down for the eighth successive week last Friday and the lowest in two years, according to the EIA. Libyan, Nigerian supply outages had a bearing on Brent, but it's nothing to write home about this fortnight. Much of the risk is already priced in, especially as Libyan outages are something City traders are getting pretty used to and Nigeria is nothing new. That's all for the moment folks! Keep reading, keep it 'crude'!