On Bukha’s oil & the beauty of Khasab 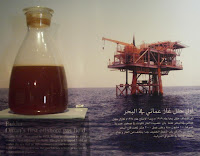 The Oilholic finds himself roughly 27 km west of Khasab, here in Oman in the wilayat (district) of Bukha on the Musandam peninsula. This area has its own 'crude' place in the history of Omani oil & gas production.

Not far off its coastline is what the government has designated as offshore exploration Block 8 – a unique prospection zone in a country whose main production hubs are largely onshore.

What's more, according to a roughneck based here, both are 'beautiful' fields. Split into Bukha and West Bukha, in 1994 Block 8 apparently yielded gas condensate that was so high in quality (64°API), according to a Petroleum Directorate of Oman (PDO) spokesperson, that you can pretty much use it to run a car without refining (a sample is pictured above left)! No exaggeration, if you get the 'purity' standpoint.

Norway’s DNO International, under a remit from Muscat, is a major player here with two production fields. Its data indicates that production from West Bukha 2 and 3 fields currently averages 8,000 oil barrels per day as well as 27 million cubic feet of dry gas. All of this is sent via a 34 km pipeline for onshore processing at a plant located in Ras Al Khaimah, UAE. Furthermore, two additional wells – West Bukha 4 and 5 are in the pipeline, no pun intended.

Exciting times indeed for the Musandam Governorate (split from the rest of Oman by the UAE), which has of late started enjoying the prosperity seen in the rest of the country. Recent prosperity aside, this peninsula oozes history from ancient to modern when it comes to global trade. Market analysts should find it quite gripping – at least yours truly did! 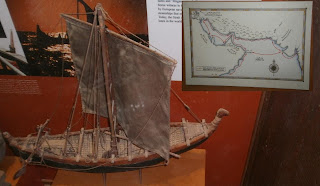 Musandam juts out into the Strait of Hormuz, with the Persian Gulf on one side and the Sea of Oman on the other. Turn the clock or sundial back 5,000 years and you would have seen ships from ancient Oman (then known as Magan) sail between Mesopotamia and India. Magan’s traders knew about (and traded with) India well before the British, French and Portuguese traders ‘discovered’ the country. A museum exhibit offers a model of the vessels and charts the route (above right).

Local historians even suggest that interaction via sea routes took place with the Indus Valley Civilization on one side and modern day Egypt on the other. Fast forward to 2013, and you can easily spot oil tankers from any high vantage point – of which the peninsula provides several. Views of the Strait of Hormuz include tankers carrying their crude cargo out to the world as it is a crossing point for 90% of the Gulf's oil due to be shipped overseas (see below left). 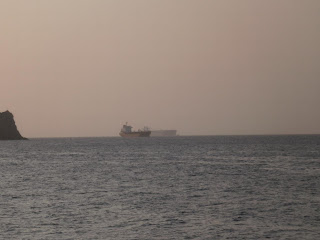 As if by divine convenience – the most navigable bit lies in Omani territorial waters. To say that Musandam bears silent testimony to the history of global trade routes would be an understatement – it has actually shaped them. Roman Empire’s logs from the 2nd century mention the Cape of Musandam, as do Marco Polo’s from the 13th century.

The Portuguese occupied Musandam between 1515 and 1622 and the imposing Khasab Castle (see below) was built during the occupation. For just over four centuries, it has overlooked regional territorial waters and formed the focal point of the modern city of Khasab. After the defeat and expulsion of the Portuguese in the 17th century, the locals modified the castle to suit their defensive needs. Today, it is a modern day museum featuring several exhibits depicting the way of life in this enchanting part of Oman (see below right).

Targeted reinvestment of regional oil wealth by the administration of Sultan Qaboos bin Said Al Said has improved links between Khasab and the rest of Oman via air and sea. A local ferry service links Khasab to Muscat, as does a daily Oman Air flight. Sand, sun and sea on one side and mountains on the other, leave everything from hiking to snorkelling as a leisure option. And should you wish to spot dolphins, get a local tour guide to take you out to the sea!

There are a few local hotels, but the Golden Tulip Resort (now Atana), Khasab is the most impressive one in the area with great views of the waterfront from a poolside balcony and most of its rooms. It is also only a few minutes away from the Bassa Beach. There is a huge supermarket right next to Khasab Castle, with the sea-port terminal for a ferry to Muscat and Khasab airport for a flight close by! Right, that’s that for travel tips and observations. (Click below left for the sights minus the sound) 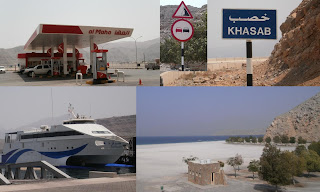 One tiny and somewhat darkly funny footnote though! A different kind of trade is also flourishing here which speaks volumes about the prosperity in Oman and the lack of it in sanction-squeezed Iran, whose coastline is barely 45 km across the Strait.

Using a decent pair of binoculars, the Oilholic spent a good few hours this evening noting how Iranian smugglers dock off the Port of Khasab (see below right for an aerial view) and conduct a 'cash and carry' trade. First off, differentiating a decidedly tacky Iranian boat from an Omani Dhow or a local motorboat is quite easy. The smugglers' communication method is rather rudimentary including a signalling system involving a combination of torchlights and car headlights. As for the cargo, do not be alarmed – it includes things as non-sinister as western branded biscuits, stimulants such as tea, coffee and cigarettes and of course dodgy satellite TV recorders.

By playing the dumb tourist card, the Oilholic got a local boatman to reveal that the trade route used here is a 50 minute motor-boat ride between Khasab and Qeshm Island, Iran and then on to the Iranian mainland. Most of the activity takes place from sunset onwards. But this desperate activity, which is lucrative for some, is also mighty dangerous.

Cross-crossing one of the busiest shipping lanes in the dark with no lights to avoid detection is fraught with danger. Storms often claim lives, as do unreported collisions with tankers and containers ships. Yet, driven by the desire to make a quick buck out of the cravings of a sanction squeezed Iran, the smugglers keep coming. Warehouses hoard until the price of a particular commodity is high enough in Iran and lo and behold a buyer usually arrives in the dark of the night.

Surprisingly, some of the smugglers or "shooties" (as they would be called were you to translate literally from Farsi), happen to be women! The Oilholic can personally vouch for it with a fair bit of disbelief! One is all for gender equality - but this is something else. Don't know about the Iranian side, but not many on the Omani side seem to mind the shooties plying their trade. If caught offshore by the Omani authorities the pretext of "fishing" usually gets the shooties away! 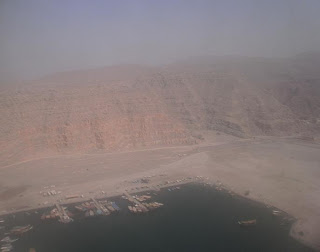 The traders of Musandam have been a very resourceful lot for centuries. In the 21st century, legal or not, sanctions have driven Iranians to a different, dangerous kind of resourcefulness. While illegal, it certainly is tenacious. Speaking of a more formal dialogue between Iran and Oman, Sultan Qaboos has become among the first world leaders to interact with Iran’s new president – Dr Hassan Rouhani. The Sultan, who is often seen as a bridge between the West and the Islamic Republic, oversaw the signing of a memorandum of understanding between Tehran and Muscat, which would see the latter export natural gas to Oman in a 25-year deal with a US$60 billion valuation.

While further details are yet to be formally announced, the transportation of natural gas would involve pulling a pipeline from Iran to Oman under the Sea of Oman, east of the Strait of Hormuz. Local media reports suggest that the deal would be the largest (by valuation) between the two nations. Sadly that’s all from Khasab folks as the Oilholic packs his bags for a short overnight stay in Muscat before the flight home to London. More from Oman later, in the meantime keep reading, keep it ‘crude’!