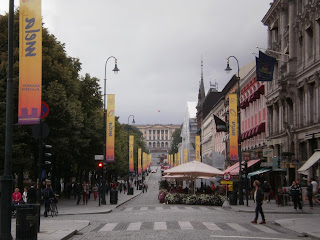 The Oilholic finds himself in Oslo, Norway for the briefest of visits at a rather interesting time. For starters, back home in London town, recent outages at Norway's Statoil-operated Heimdal Riser platform are still causing jitters and firming up spot natural gas prices despite the low demand. Although it’s a lot calmer than last Wednesday as order has been restored. The UK is also soaking in news that Norway's US$760 billion oil fund (the world's biggest investor), has cut its British government debt holdings by a whopping 26% to NKr42.9 billion (£4.51 billion, $7.26 billion) and increased its Japanese government bond holdings by 30% to NKr129.5 billion.

However, the biggest story in Oslo is Statoil’s decision to sell minority stakes in several key offshore fields in the Norwegian sector of the North Sea and far north to Austria's OMV. To digest all of that, the Oilholic truly needed a pint of beer – but alas that hurts here! No, not the alcohol – but the price! On average, a pint of beer at a bar on Karl Johans Gate with a view of the Royal Palace (pictured above left) is likely to set you back by NKr74 (£8.20 yes you read that right £8.20). Monstrous one says! Anyways, this blog is called Oilholics Synonymous not Alcoholics Anonymous – so back to 'crude' matters.

Chatter here is dominated by the Statoil decision to sell offshore stakes for which OMV forked-up US$2.65 billion (£1.7 billion). The Norwegian oil giant said the move freed up much needed funds for capex. Giving details, the company announced it had reduced its ownership in the Gullfaks field to 51% from 70% and in Gudrun field to 51% from 75%.

The production impact for Statoil from the transaction is estimated to be around 40,000 barrels of oil equivalent (boe) per day in 2014, based on equity and 60 boe per day in 2016, according to a company release. However, Chief Executive Helge Lund told Reuters that the company will still have the capacity to deliver on its 2.5 million barrels per day (bpd) ambition in 2020.

"But we will of course evaluate it as we go along, whether that is the best way of creating value.It will impact the short-term production...but we are not making any changes to our guiding at this stage," he added.

For OMV, the move will raise its proven and probable reserves by about 320 million boe or nearly a fifth. What is price positive for Austrian consumers is the fact that it will also boost OMV’s production by about 40,000 bpd as early as 2014.

Statoil’s consideration might be one of capex; for the wider world the importance of the deal is in the detail. First of all, it puts another boot into the North Sea naysayers (who have gone a bit quiet of late). There is very valid conjecture that the North Sea is in decline - hardly anyone disputes that, but investment is rising and has shot up of late. The Statoil-OMV deal lends more weight that there's still 'crude' life in the North Sea.

Secondly, $2.65 billion is no small change, even in terms relative to the oil & gas business. Finally, OMV is a unique needs-based partner for Statoil. The Oilholic is not implying it’s a strange choice. In fact, both parties need to be applauded for their boldness. Furthermore, OMV will also cover Statoil's capex between January 1 and the closing of the deal, which could potentially raise the final valuation to $3.2 billion in total, according to a source. 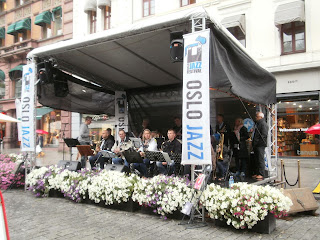 And, for both oil firms it does not end here. OMV and Statoil have also agreed to cooperate, contingent upon situation and options, on Statoil's 11 exploration licences in the North Sea, West of Shetland and Faroe Islands.

Continuing the all around positive feel, Statoil also announced a gas and condensate discovery near the Smørbukk field in the Norwegian Sea. However, talking to the local media outlets, the Norwegian Petroleum Directorate played down the size of the discovery estimating it to be between 4 and 7.5 million cubic metres of recoverable oil equivalents. Nonetheless, every little helps.

Right that’s about enough of crude chatter for the moment. There’s a Jazz festival on here in Oslo (see above right) which the Oilholic has well and truly enjoyed and so has Oslo which is basking in the sunshine in more ways than one. But this blogger also feels inclined to share a few other of his amateur photos from this beautiful city – (clockwise below from left to right, click image to enlarge) – views of the Oslofjord from Bygdøy museums, sculptures at Frogner Park and the Edvard Munch Museum, which is currently celebrating 150 years since the birth of the Norwegian great in 1863.

Away from the sights, just one final crude point – data from ICE Futures Europe suggests that hedge funds (and other money managers) raised bullish bets on Brent to their highest level in more than two years in the week ended August 13.

In its weekly Commitments of Traders report, ICE noted – speculative bets that prices will rise, in futures and options combined, outnumbered short positions by 193,527 lots; up 2.5% from the previous week and is the highest since January 2011. Could be higher but that’s the date ICE started the current data series – so there’s no way of knowing.

In the backdrop are the troubles in Egypt. As a sound Norwegian seaman might tell you – it’s not about what Egypt contributes to the global crude pool in boe equivalent (not much), but rather about disruption to oil tankers and shipping traffic via the Suez Canal. That’s all from Oslo folks. Next stop – Abu Dhabi, UAE! Keep reading, keep it ‘crude’!