For US President, the Oilholic endorses 'neither'! 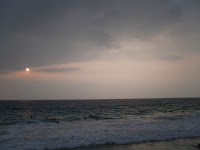 Whilst lounging on Hawaii’s beautiful White Sands Beach in Kona, the Oilholic wondered if the dear readers of this blog know what is a Humuhumunukunukuāpuaʻa (pronounced ‘humu – humu – nuku – nuku – apa – wapa’)? Revelation on what it is and how it relates to energy policy stances of President Barack Obama and challenger Mitt Romney follows. The Presidential debates are over, all banners are up and the speeches are reaching a last minute fervour as Romney and Obama begin the concluding phases of their face-off ahead of the November 6, 2012 US Presidential election day.

As decision day draws nearer, the Oilholic endorses neither as both leading candidates have displayed a near lack of vision required to steer US energy policy in light of recent developments. The USA, despite its oil imports dynamic, believe it or not is the world’s third largest producer of crude oil by volume and among the market leaders in the distillates business.

With the next generation of independent wildcatters’ knack for finding value and economies of scale for small volumes (mostly in Texas and North Dakota), shale oil and an overall rise in countrywide oil output, things can only get better with the right man in charge at the White House. Additionally, the shale gas bonanza bears testimony to just about everything from American ingenuity and the benefits of an impressive pipeline (to market) network to a favourable legislative framework.

Yet both Obama and Romney sound unconvincing on respective plans for the energy industry despite their country’s domestic good fortune in recent years. The President’s policy has been a near failure while his opponent’s plans are insipid at best. Starting with the President first, since the Oilholic is in his birthplace of Hawaii and having arrived from California which hasn’t voted Republican in recent decades, bar the exception of Ronald Regan’s bid for the White House.

On the plus side, the Obama administration has opened up new US regions to oil and gas prospection though red tape persists. It has made noteworthy moves as a proponent of energy efficiency and energy economy drives for motorists and businesses alike. But on this briefest of note, the positivity ends. The BP Deepwater Horizon spill was as much about the failure of the company involved, as it was about the initial fuzzy response of the Obama administration followed by political points scoring as public anger grew when the spill wasn’t plugged for months.

Then of course there is the Solyndra boondoggle and supposed plans for “clean coal” where the less said the better, unless you are an opponent of the President. Shenanigans of the US Congress put paid to any plans he may have had for curbing greenhouse gas emissions. Then of course there are politically fishy manoeuvres ranging from not offering proactive support to shale prospection and delaying the Keystone XL pipeline project from Canada until after the election and to reach (and then again subsequently threaten to reach) US strategic petroleum reserves as petrol prices rose at US pumps.

Yet for all of his incompetence, the American energy industry is not in an unhappy place thanks largely to the Bush administration’s recognition of the domestic reserve potential and Dick Cheney’s super-aggressive push on shale. What is disappointing is that it could have been much better under Obama but wasn’t. Remember all those “Yes we can” posters of his from the 2008 campaign. The Oilholic was hard pressed not to find at least one Obama banner once every four or five streets in major Californian metropolitan areas on a visit back then (using Los Angeles, San Diego, San Francisco, San Jose, Sunnyvale and Sacramento as a basis).

Last week in San Diego yours truly found none and this week in Hawaii has been the same. For the US energy business, the absence of “Yes we can” banners conveys the same metaphorical message of being let down perhaps as the rest of the country. Things are tagging along in the energy business despite of Obama not because of anything in particular that he has done. Of course, he did make a tall claim of a cut in US oil imports from the Middle East which is true. However, the Oilholic agrees with T. Boone Pickens on this one – yes the US production rise has contributed to reduced importation of crude oil but so has the dip in economic performance which cuts energy usage and makes the citizenry energy frugal. What has Obama done?

Well so much so for the President, but what about his challenger? Sigh...The Right Honourable Mitt Romney’s policy is to make (and switch) a policy on the go accompanied by jumbled statements. Or, in something that would make the fictitious British civil servant Sir Humphrey Appleby from BBC’s political satire Yes Minister proud – the Romney campaign’s policy is not to have a policy unless asked about a particular facet of the energy business.

So what do we know so far? Romney stands for less regulation, a more lenient approach to environmental regulations and will cut addiction to subsidies. But political waffle aside, all we have had is him blast Obama over the Solyndra affair, call for a repeal of Clean Air Act without outlining his ‘clean’ alternative and a proposal to allow wind power subsidies to lapse (again without spelling out the Romney plan for Wind Power).

He flags up the shale boom without being mindful that it too needed incentives to begin with before market forces kicked-in. Admittedly, the wind energy sector works to a different dynamic and is indeed subsidy addicted. But a quip to cut subsidies without a cohesive back-up plan reeks of political opportunism. The only way Romney scores better than Obama on energy policy is that he is not Obama and who knows if that might be reason enough to vote for good ol’ Mitt. 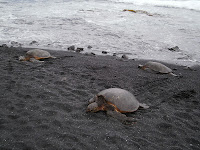 Both men have the fuzziest of plans with erratic changes in stance suited to the political climate in an election year. This brings us back to the Humuhumunukunukuāpuaʻa which is the Hawaiian state fish from the tropical reef triggerfish family. The local name simply means "the fish that grunts like a pig" for the sound it makes when caught. It is also prone to sudden erratic changes in position and swimming patterns while negotiating the Hawaiian coral reefs according to a local marine biologist. Kinda like the two main US Presidential candidates isn’t it?

That’s all from Hawaii folks as the Oilholic prepares for the long journey home. It has been a memorable week in another memorable part of America. Alas, all good things must come to an end. Yours truly leaves you with a photo of Hawaiian residents of the Punaluʻu Black Sand beach – the Hawksbill and Green sea turtles (above right) and moi at Old Kona State Airport recreation beach and park. 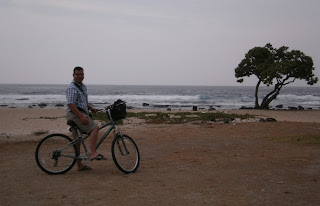 You can cycle down 30 miles along the Kona coastline and stop every 15 mins to ask “Is that a view? Or is that a view?” and you’ll conclude that that’s a view! The people are lovely, the food is great, the place oozes natural history and tales of human history. Since this blogger also drove 260 miles circling the entire Big Island via its main highway with the help of veteran local tour guide John Mack, one can confirm that different parts of this Hawaiian isle get 11 of the 13 climate ranges known to mankind.

It is a privilege to have spent a week here, where for a change blogging on oil did not reign supreme. Next stop Los Angeles International followed by London Heathrow – a day long up in the air affair! Keep reading; keep reading it ‘crude’ – but its goodbye to the ‘Aloha’ state!

My Dear Oilholic:
The Obama - Romney fight is between government regulation and the free market. This is EXACTLY where the energy debate comes in - the price of oil, hence our gasoline, is primarily set by foreign governments, secondarily by the global economy - there is no free market in oil. Natural gas prices, however, are set by the US free market. Today, diesel fuel energy costs 6 times natural gas energy - after the economy improves gas prices, diesel may be only three times as expensive as gas. But private industry is too slow to invest in fuel switching to save our balance of payments and our overseas debt crisis - we need US Govt. intervention via performance contracting for LNG supply to all US surface transportation dependent on government funding - trucks, barges, railroads. We can eliminate our $1 Billion / day oil import deficit by doing this, with NO taxpayer cash. This is already being done by private industry, but too slowly. A classic Romney Republican move - totally alien to Obama, as it doesn't need any studies, subsidies, or bureaucrats - it even SAVES money on the governnment's fuel bill, and reduces emissions significantly.
Email me for reference data, video, etc
Andrew Grant, Principal
Biomass Power Projects LLC
agrant@biomasspowerprojects.com
330 607-4648

Thanks for your comment Andrew. You are echoing the sentiments conveyed to me earlier in April by a contact at Chesapeake.

On a related note, I just had an animated conversation with a Democrat-leaning lady on a flight in to LAX. I suggested that with the right support the US could (and most probably will) become a meaningful energy exporter viz. Natural gas. After all FERC has pending applications for re-jigging LNG import terminals into export facilities. However, her contention is that the moment exports start, the American consumer will feel the pinch. So she thinks House Democrats should not "encourage" shale anymore than it already is. That’s the biggest load of nonsense I have heard on my recent travels. Surely, given the Henry Hub’s disconnect with the price natural gas fetches per BTMU in Europe / Asia, it is the natural thing to do.

It also has positive geopolitical connotations. Proof is in the pudding – both Russia and Qatar are worried about US shale gas. I am a bit jet-lagged and have another 11 hours of flying ahead of me – but let’s keep in touch. Feel free to email me anytime; any place.