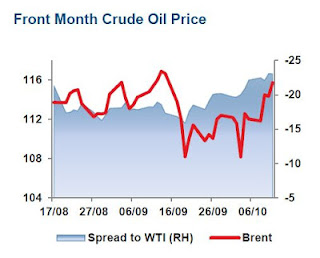 Rather than a daily assessment, the Oilholic often looks at how the forward month price of leading crude oil benchmarks fluctuates on a weekly basis. Such an exercise regularly provides interesting tangents for a discussion at the beginning of the week. Last Monday all three benchmarks – Brent, WTI and OPEC’s basket of crude – were in the red in week over week terms. This Monday, all three are in the green rising roughly between 2% and 3%. There is a clear reason for the upside momentum with Brent holding firm above US$114 per barrel and the WTI above US$90.
Better than expected Chinese economic data is largely behind the current market sentiment (see graphic above, click to enlarge). But as yours truly fast loses count of how many ‘critical’ EU summits we have recently had, another one is due towards the end of the week. So market caution will prevail either side of the pond. For Sucden Financial analyst Myrto Sokou, the two-day summit (this Thursday and Friday) and the regional Spanish elections (Galicia and Basque) will be the main focus for the week.
“We are not expecting any decision yet on Spain’s issues, with Reuters again suggesting that bundling multiple bailouts in one package is preferable, especially for Bundestag approval. Again the usual flow of Greek rumours, with some suggesting that the country needs two more years to implement reforms,” she added.
US EIA data released last Friday noted that American crude oil stocks built by 1.7 million barrels driven by a 193,000 barrels per day (bpd) increase in supply. This came from an import rise of 115,000 bpd and a domestic output rise of 78,000 bpd (to 6.598 million bpd). Concurrently, US refinery runs declined by 97,000 bpd, in line with the maintenance season and Cushing, Oklahoma stocks slightly gained by 0.3 million barrels (and are still comfortably above five year highs).
Société Générale analyst Mike Wittner felt the report indicated a typical pattern for a refinery maintenance season. “We see a very bullish backdrop for products and a bearish trend for crude…However, all products' fundamentals were very weak - both supply and demand. Recent positive US macroeconomic data might improve demand and add an upward pressure on prices,” he concluded.
Moving away from the price of the crude stuff, confirmation finally came that the Irish are about to hit black gold in meaningful quantities after many false dawns. This may largely be attributed to Providence Resources, a Dublin and London AiM dual-listed company, which first caught the Oilholic’s eye back in May. 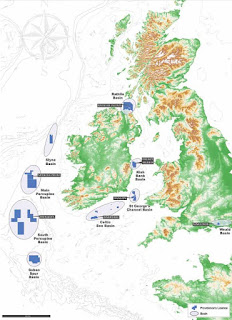 The company’s chief executive Tony O’Reilly confirmed last week that its Barryroe site, 30 miles off the Cork coast, could potentially yield 280 million barrels of oil. He told the BBC that with Brent crude above US$100 per barrel at moment, the prospection offered a “lot of value” and would mark the beginning of the Irish oil industry.
While rules related to licensing, taxation and local job facilitation would still need to be worked on, what is transpiring at Providence is by all accounts a pivotal moment. "We hope there is a renaissance of interest by international companies who need to come to Ireland and help us to exploit our natural resources. We cannot do it alone," O’Reilly added.
ExxonMobil has already obliged by opting to explore a Providence site at Drumquin. Many others would surely follow given number of exploration licences the company currently holds according to its 2011 Annual report (see map of Providence Resources' licences above right, click to enlarge). Crossing over to the other side of the planet, East Timor or Timor Leste has created its domestic Institute of Petroleum and Geology (IPG) by means of its Decree-Law 33/2012 of July 18, 2012.
The new institute will be entrusted with archiving, producing, managing, storing and disseminating geological data, including that related to onshore and offshore oil, gas and mineral resources. Miranda Law Firm, which operates in the once strife ravaged jurisdiction, said the data collected and managed by IPG will provide the basis and impetus for domestic prospecting, exploration and production.
The problem is not so much of data collection hindering offshore prospection but one of defining East Timor’s maritime boundaries. It only became an independent state in May 2002. The new nation did not accept the Timor Gap Treaty of 1989, which divided the country’s resources between Australia and Indonesia. It was signed over a decade after Indonesia invaded East Timor in 1976 which had formerly been a Portuguese colonial outpost.
A new agreement – the Timor Sea Treaty of 2002 – then proposed a Joint Petroleum Development Area (JPDA) with a 90:10 oil & gas revenue share of new finds between East Timor and Australia. Then perhaps much to the chagrin of locals, Greater Sunrise Gas field – considered one of the most promising finds in the region – saw only a fifth of its nautical area within JPDA confines. As a consequence, only 18% of generated revenue currently falls in East Timor's lap according to sources in the Australian media. All the Oilholic can say is that if you need a crude talking point – talk East Timor.
Moving on from one post-conflict area to another supposedly post-conflict region – the Niger Delta – where Shell rejected the liability claims by four Nigerian farmers. At a civil court in The Hague, they have accused the Anglo-Dutch oil major of ruining their livelihood and causing damage to their land on account of oil spills. Shell for its part blamed sabotage and criminal theft by locals for the damage.
In a statement it said, "The real tragedy of the Niger Delta is the widespread and continual criminal activity, including sabotage, theft and illegal refining, that causes the vast majority of oil spills. It is this criminality which all organisations with an interest in Nigeria's future should focus their efforts on highlighting and addressing."
Opinion might well be divided, but this is the first instance of a half-Dutch multinational being taken to a civil court for an alleged offence caused outside the Netherlands. The only local connection is the Dutch arm of environmental group Friends of the Earth which is backing the four Nigerian farmers. While this landmark case is far from reaching its conclusion, if it has piqued your interest then Michael Peel’s brilliant book A Swamp Full of Dollars could give you all the background to the spills, the violence, the destruction and the crude world of Nigerian oil.
Finally, from the serious to the farcical – an episode was brought to the Oilholic’s attention by a colleague at industry scouting data and technical information provider Drillinginfo.  It seems Hollywood megastar Matt Damon’s latest foray – The Promised Land – widely touted as an anti-fracking response to US shale exploration is part bankrolled or rather will be brought to our screens “in association with” Image Media Abu Dhabi, a subsidiary of Abu Dhabi Media, according to the preview’s list of credits.
The media company is wholly owned by the government of UAE; an OPEC member country and one from which the US is hoping to cut its crude imports from based on the prospects of domestic shale exploration! It is best to leave it to you folks to draw your own conclusions, but that’s all for the moment! Keep reading, keep it ‘crude’!
© Gaurav Sharma 2012. Graphic 1: Forward month crude oil price © Sucden Financial, October 2012. Graphic 2: Providence Resources’ existing licences © Providence Resources Plc, December 2011
Posted by Gaurav Sharma at 10/15/2012 08:08:00 pm

Just to clarify, we have the best scouting data in the industry, and it's all easily searched and displayed in both map and table form. Just thought I'd clear that up. Thanks for the mention!!