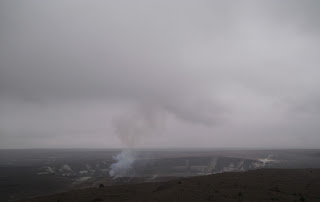 In a break from the ‘crude’ norm for visits to the USA, the Oilholic packed his bags from California and headed deep out to the Pacific and say ‘Aloha’ to newest and 50th United State of Hawaii. It’s good to be here in the Kona district of the Big Island and realise that Tokyo is a lot closer than London.

It is interesting to note that Hawaii is the only US state still retaining the Union Jack in its flag and insignia. The whole flag itself is a deliberate hybrid symbol of British and American historic ties to Hawaii and traces its origins to Captain John Vancouver – the British Naval officer after whom the US and Canadian cities of Vancouver and Alaska’s Mount Vancouver are named.

What’s not good being here is realising that a 1.3 million plus residents of these northernmost isles in Polynesia pay the most for their energy and electricity needs from amongst their fellow citizens in the US. It is easy to see why, as part dictated by location constraints Hawaii presently generates over 75% of its electricity by burning Petroleum.

Giving the geography and physical challenges, most of the crude oil is shipped either from Alaska and California or overseas. Furthermore, the Islands have no pipelines as building these is not possible owing to volcanic and seismic activity. Here’s a view of one active crater – the Halema’uma’u in Kilauea Caldera (see above right). You can actually smell the sulphur dioxide while there as the Oilholic was earlier today. In fact the entire archipelago was created courtesy of volcanic eruptions millions of years ago. The Big Island’s landmass of five plates is created out of Mauna Kea (dormant) and Mauna Loa (partly active) and the island is technically growing at moment as Kilaueu still spews lava which cools and forms land.

So both crude and distillates have to be moved by oil tankers between the islands or tanker lorries on an intra-island basis. The latter  creates regional pricing disparities. For instance in Hilo, the commercial heart of the Big Island and where the tanker docking stations are, gasoline is cheaper than Kona by almost 40-50 cents per gallon. The latter receives its distillates by road once tankers have docked at Hilo.

The state has two refineries both at Kapolei on the island of O‘ahu 20 miles west of capital Honolulu – one apiece owned by Tesoro and Chevron. The bigger of the two has a 93,700 barrels per day (bpd) and is owned by Tesoro; the recent buyer of BP’s Carson facility. However in January Tesoro put its Hawaiian asset up for sale.

Tesoro, which bought the refinery for US$275 million from BHP Petroleum Americas in 1998, said it no longer fitted with its strategic focus on the US Midcontinent and West Cost. The company expects the sale to be completed by the end of the year. Its Hawaiian retail operations, which include 32 gas stations, will also be part of the deal. Chevron operates Kapolei’s other refinery with a 54,000 bpd capacity. Between the two, there is enough capacity to meet Hawaii’s guzzling needs and the pressures imposed by US forces operations in the area.

In this serene paradise with volcanic activity and ample tidal movement, power generation from tidal and geothermal is not inconceivable and facilities do exist. In fact, for the remaining 25% of its energy mix, the state is one of eight US states with geothermal power generation and ranks third among them. Additionally, solar photovoltaic (PV) capacity increased by 150% in 2011, making Hawaii the 11th biggest US state for PV capacity. However, it is not nearly enough.

One simple solution that is being attempted is natural gas – something which local officials confirmed to the Oilholic. The EIA has also noted Hawaii’s moves in this direction. Oddly enough, while Hawaii hardly uses much natural gas, it is one of a handful of US states which actually produces synthetic natural gas. Switching from petroleum-based power generation to natural gas for much of Hawaii’s power generation could lower the state’s power bills considerably as the massive disconnect between US natural gas and crude oil prices looks set to continue.

Strong ‘gassy’ moves are afoot and anecdotal evidence here suggests feelers are being sent out to Canada, among others. In August, Hawaii Gas applied for a permit with the Federal Government to ship LNG to Hawaii from the West Coast. While the deliveries will commence later this year, arriving volumes of LNG would be small in the first phase of the project, according to Hawaii Gas. At least it is a start and the State House Bill 1464 now requires public utilities to provide 25% of net electricity sales from renewable sources by December 31, 2020 and 40% of net electricity sales from renewables by December 31, 2030. 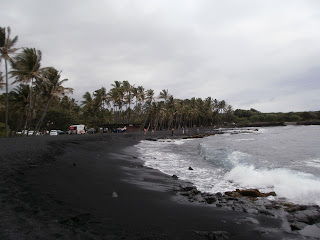 That’s all for the moment folks as the Oilholic needs to explore the Big Island further via the old fashioned way which requires no crude or distillates – its the trusty old bicycle! Going back to history, it was Captain James Cook and not Vancouver who located these isles for the Western World in 1778. Regrettably, he got cooked following fracas with the locals in 1779 and peace was not made between Brits and locals until Vancouver returned years later.

Moving away from history, yours truly leaves you with a peaceful view of Punaluʻu or the Black Sand beach (see above left)! It is what nature magnificently created when fast flowing molten lava rapidly cooled and reached the Pacific Ocean. According to a US Park Ranger, the beach’s black sand is made of basalt with a high carbon content. It is a sight to behold and the Oilholic is truly beholden! On a visit there, you have a 99.99% chance of spotting the endangered Hawksbill and Green turtles lounging on the black sand. For once, yours truly is glad there are no bloody pipelines in the area blotting the landscape. More from Hawaii later - keep reading, keep it ‘crude’!