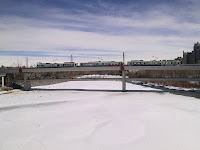 I have spent the last two weeks quizzing key crude commentators in US and Canada about what price of crude oil they feel would be conducive to business investment, sit well within the profitable extraction dynamic and last but certainly not the least won't harm the global economy.

Beginning with Canada, since there’s no empirical evidence of the Canadian Dollar having suffered from the Dutch disease, for the oil sands to be profitable – most Canadians remarked that a price circa of US$75 per barrel and not exceeding US$105 in the long term would be ideal. On the other hand, in the event of a price dive, especially an unlikely one that takes the price below US$40 per barrel would be a disaster for petro-investment in Canada. A frozen Bow River (pictured above) is ok for Calgarians, but an investment freeze certainly wont be!

This begs the question – what have Middle Eastern governments budgeted for? Research by commentators at National Commercial Bank of Saudi Arabia, the Oilholics’ feedback from regional commentators and local media suggests the cumulative average would be US$65 per barrel. Iran and Iraq are likely to have budgeted at least US$10 above that, more so in the case of the former while Saudi Arabia (and maybe Kuwait) would have budgeted for US$5 (to US$10) below that.

Problem for the Oilholic is getting access to regional governments’ data. Asking various ministries in the Middle East and expecting a straight forward answer, with the notable exception of the UAE, is as unlikely as getting a Venezuelan official to give accurate inflation figures.

Meanwhile, price is not the only thing holding or promoting investment. For instance, the recent political unrest has meant that the Egypt Petroleum Corp. has delayed the Mostorod refinery construction until at least May. The reason is simple – some 20-odd participating banks, who arranged a US$2.6 billion loan facility want the interim government to reaffirm its commitment to the project, according to a lawyer close to the deal. The government, with all due respect, has quite a few reaffirmations to make.