Oh the market ‘insouciance’ outside is frightful! 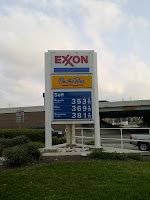 It is no longer strange to see Americans and Canadians complain about the rising price of gasoline. After all, it’s the price at the pump which hurts us all – something which has seen a steady rise.

A short-term respite is quite frankly not in sight; more so for Europeans but complaints from North American consumers and change in consumption patterns (in relative terms) have grown in the last five years. Although some in the English town of Bradford, who pay more for their petrol/per litre than North Americans, got a temporary one-off respite according to the BBC, after the station staff put a decimal point in the wrong place. The story is hilarious, aptly timed for April Fools Day and one for the little guy troubled by rising inflation in UK.

US President Obama finally pointed to Canada, Mexico as reliable sources of crude oil and said they could play their part in his consuming nation’s bid to slash imports from unfriendly governments. Both countries rank higher than Saudi Arabia in terms of crude exports to the US, so very welcome quotes – but as with all else about him – a bit late.

The short-term problem – and a global one it is too – is the widening of premium between easier to refine sweet crude oil and sour crude which is the opposite. Anecdotal evidence, either side of the Atlantic is that refiners (either European or European subsidiaries of overseas owners), are paying record physical premiums to secure supplies of sweet crude in wake of the Libyan stand-off.

The quality of Libyan sweet crude is excellent and as a short-term problem starts resembling a longer termed stand-off, the market is getting spooked as no one can make up their minds about who is in charge of the country. That’s despite the on / off media reports of oil being loaded on to tankers both on the rebels’ side and Gaddafi’s side.

End result - Brent Crude forward month futures (May) contract, more reflective of global conditions, has spiked to a 30-month high. Oilholic believes this is no ordinary or linear spike resulting from a geopolitical bias/risk premium to the upside. Rather it is clearly reflective of the rise in price differentials between sweet and sour crude in wake of Libya and hence impacts Brent as a benchmark to a greater extent than the WTI.

As early as a fortnight ago, the IEA rightly warned that we are underestimating the impact of the temporary (or otherwise) loss of Libyan sweet crude on traded paper barrels. In its monthly report for March, it noted, "Market insouciance may change abruptly as April approaches, when global crude demand is expected to increase by around 1 million barrels a day as Atlantic Basin refinery maintenance ends."

Sweet crude varieties are trading at a premium of US$2.80 to US$4.10 per barrel above sour varieties, according to the Oilholic’s sources. This is the highest for some time. Try as they might, Saudis won’t materially alter this; the premium has solid foundations!

Finally before I leave Canada for San Francisco, here is a brilliant editorial in The Economist about European nations trying to forget embarrassing ties in the Middle East and a BBC report on Transocean’s 'crude' announcement of bonuses related to their "best year of safety."